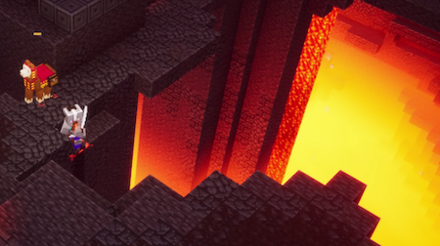 Besides simple health boosts, each Armor has special effects that can benefit the player and work with the build as a whole. Learn which Armor is best for what purpose and which are best for early in the game! 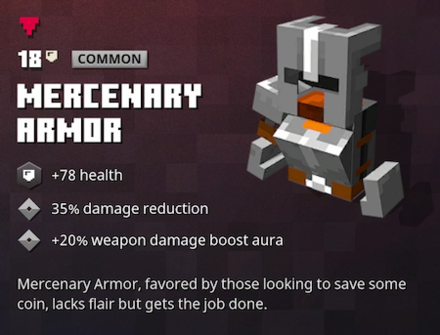 The Mercenary Armor has back-to-back stat boosting effects for both offense and defense, with a whopping 35% damage reduction around the board as well as a 20% boost in weapon damage for you and nearby allies.

Although it lacks fancy effects, the Mercenary Armor keeps your character both strong and secure.

Unlike the similar Scale Mail which only boosts melee damage, this Armor works well with ranged weapons like the Longbow, taking advantage of the damage boost to each shot while absorbing oncoming arrows without fear. 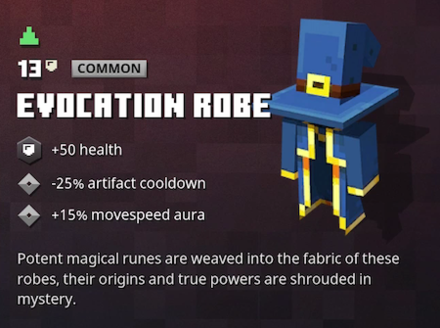 The Evocation Robe is one of those armors that stresses its effect over the concept of protecting the wearer. Instead of boosting defensive properties, it instead powers up the speed of you and nearby allies, while also reducing your artifact cooldown time.

Even better if it's got Health Synergy, which restores health for every time you use an Artifact. Lower cooldown time means more health! Also consider Speed Synergy with Boots of Swiftness to push the pedal to the metal! 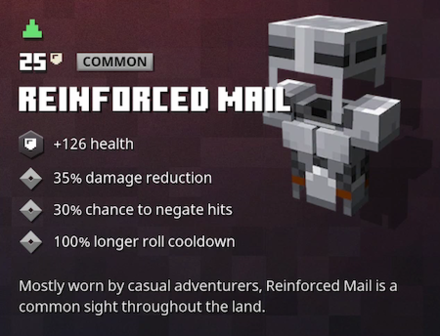 Although it's a bit of a stretch for Early Game, first becoming available at Fiery Forge, the Reinforced Mail defines what Armor means. With the defensive properties of Mercenary Armor combined with a 30% chance to completely negate incoming hits, you'll be able to go head-to-head with enemies and weather damage that would normally send you flying.

It has a huge nerf to dodge rolls, but you'll be able to more than make up for any damage you take without dodging by simply absorbing it instead. If you need to rush into battle, use the Boots of Swiftness instead of the dodge roll.

This Armor works especially well when combined with Enchantments like Health Synergy and Anima Conduit which provide a constant supply of health, keeping you topped up despite the damage you do take. Why stop at a defensive build when you can have an invulnerable build?

Register as a member and get all the information you want. (It's free!)
Login
Opinions about an article or post go here.
Opinions about an article or post
We at Game8 thank you for your support.
In order for us to make the best articles possible, share your corrections, opinions, and thoughts about "Best Armor for Early Game" with us!
When reporting a problem, please be as specific as possible in providing details such as what conditions the problem occurred under and what kind of effects it had.