What is the Hero Edition? 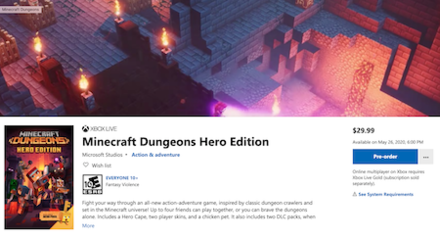 As the in-game items included are purely cosmetic, the primary draw to purchasing the Hero Edition seems to be the two DLC packs included. Read on for more information about the included DLC.

What is the Minecraft Dungeons DLC Included?

Learn more about what's coming in the DLC in our full article below!

Everything We Know about Jungle Awakens and Creeping Winter

Is the DLC included in Xbox Game Pass?

In order to purchase the Hero Edition content separately, you can purchase a Hero Pass from the Microsoft Store at the link below.

Is the DLC Exclusive to Hero Edition? 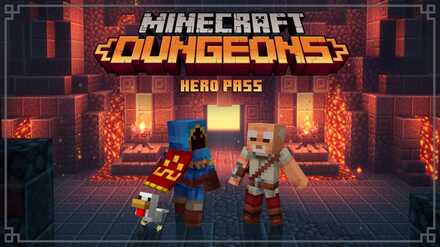 There hasn't been any announcement regarding an option to purchase the DLC exclusively, separate from the currently available Hero Edition. If you purchased the Standard Edition and are interested in purchasing the DLC as well, considering buying a Hero Pass for $9.99 on the platform of your choice, which will upgrade your game to the Hero Edition and give you full access to the Jungle Awakens and Creeping Winter DLCs when they are released.

What are the Other Items Included?

The other items included with the Hero Edition include the Hero Cape, two Player Skins, and a Chicken Pet.

The Hero Cape is included under a special Cosmetic section of the Items menu, so unlike Armors, it has no effect on your stats. However, it's great for flaunting to other players online and making all of your outfits that much more heroic!

As the characters' appearances are fully customizable, these skins will most likely provide some unique appearance choice unique to owners of the Hero Edition.

The Baby Chicken, a classic mainstay of Minecraft, will be available to players as a Pet. Unlike other Pets. the Chicken seems to be purely cosmetic, and does not actually assist you in defeating enemies.

How to Use the Hero Cape and Chicken Pet

The Hero Cape and Chicken Pet are not in an immediately apparent location, so many players have had questions about how to access them after purchasing the Hero Edition.

To use these items, open the Inventory screen and navigate to the far right option to access the Cosmetic items. Here, the Hero Cape and Baby Chicken pet will be available to add flair to your character.

Register as a member and get all the information you want. (It's free!)
Login
Opinions about an article or post go here.
Opinions about an article or post
We at Game8 thank you for your support.
In order for us to make the best articles possible, share your corrections, opinions, and thoughts about "What is Minecraft Dungeons: Hero Edition? | What is the Hero Edition DLC?" with us!
When reporting a problem, please be as specific as possible in providing details such as what conditions the problem occurred under and what kind of effects it had.