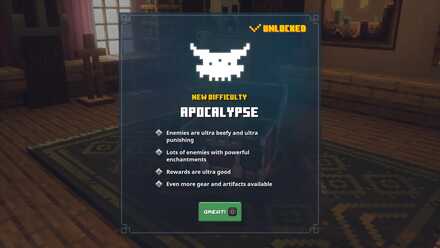 There are 3 difficulty modes available in the game: Default, Adventure, and Apocalypse. Each of these difficulties offers a different challenge and a set of rewards to match. You can change to a difficulty you have already unlocked on the world map by pressing the triangle (△) button. 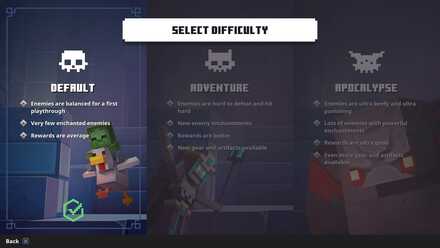 Enemies in Default difficulty are balanced so they are neither too easy or too difficult. Perfect for a fresh start.

There are only a few enchanted enemies that can be encountered here and most of them are just enchanted by priests and not naturally enchanted.

Most of the items in the game can already be unlocked in this difficulty but their power level are, of course, inferior to those that you can get on higher difficulties. 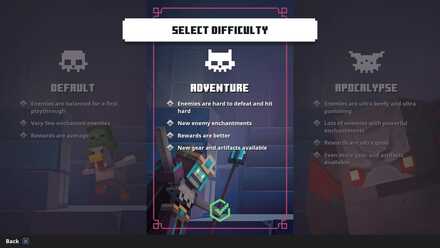 Adventure difficulty is unlocked after beating all 10 story missions in Default difficulty.

Enemies have increased health and deal more damage. There is also a noticeable increase of enchanted enemies in this mode and most of their enchantments are new for someone who just finished Default difficulty.

To match the increased difficulty, there are new gear and artifacts available to unlock and all have power levels higher than those you can get from the earlier difficulty. Also, powerful enchantments become available and has a chance to appear on the equipments that you obtain here. 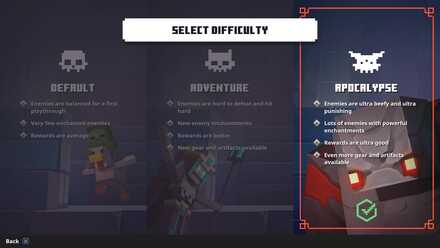 Finally, the Apocalypse difficulty is unlocked after beating all 10 story missions in Adventure difficulty.

Enemies get tankier and murderous than ever before and more enemies have powerful enchantments.

Of course, the game will reward you for overcoming these challenges by having the endgame gear and artifacts available and increasing their available power levels together with the items that you already have unlocked from the previous difficulties. 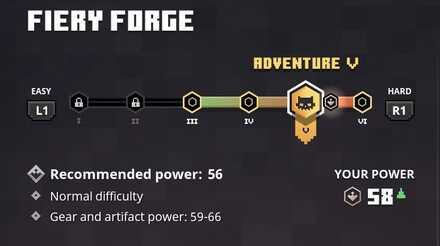 The Difficulty bar refers to the bar that you can adjust while selecting a mission.

You can adjust the difficulty level of the mission before you play it by pressing L1 to make it easier or R1 to make it harder. Take note that you cannot play on a difficulty that is lower than the minimum difficulty which is shown on the bar as "locked".

As you might have already guessed, rewards like EXP, gear, and artifacts are better on higher difficulty levels than lower ones but they are more difficult to obtain since the enemies are adjusted accordingly.

Register as a member and get all the information you want. (It's free!)
Login
Opinions about an article or post go here.
Opinions about an article or post
We at Game8 thank you for your support.
In order for us to make the best articles possible, share your corrections, opinions, and thoughts about "Difficulty Modes" with us!
When reporting a problem, please be as specific as possible in providing details such as what conditions the problem occurred under and what kind of effects it had.