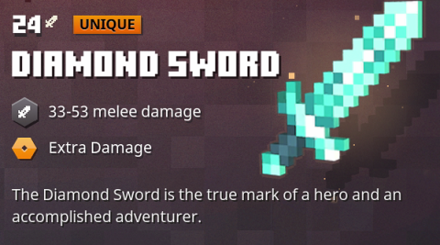 Most of the weapons and armors have other effects in addition to the amount of damage they can do and the amount of health they can give. Know more about these additional effects below!

Other than the amount of damage weapons deal and the amount of health armors give, they also have additional effects. These effects are fixed which means they are not affected by the character's level or their power level.

Effects marked with an orange hexagon are innate enchantments which are found only on unique gear while other additional effects than these are found on other gear with the same type.

Bonebow's "Arrows grow size" is an innate Growing which increases each arrow's damage and size depending on the distance it has travelled before impact.

Diamond Sword and Broadsword's "Extra Damage" is an innate Sharpness which increases their base damage.

Master's Bow and Elite Power Bow's "Greater damage" is an innate Power which increases its base damage.

Eternal Knife's "Chance to Gain Souls" is an innate Soul Siphon which grants a chance to obtain more souls on each hit.

Fangs of Frost's "Slows Mobs" is an innate Freezing which slows mobs' movement and attack speed on for a few seconds on hit.

Soul Fists and Feral Soul Crossbow's "Souls Critical Boost" is an innate Enigma Resonator which boosts critical chance depending on the number of souls you currently have.

Maulers's "Increases attack speed" is an innate Rampaging which has a chance to grant attack speed upon killing an enemy.

Flail and Jailor's Scythe's "Binds and Chains Enemies" is an innate Chains which binds a group of mobs together.

Grave Bane's "Extra Damage to Undead" is an innate Smiting which deals increased damage to undead enemies like zombies and necromancers.

Voidcaller and Hammer of Gravity's "Pulls in enemies" is an innate Gravity which pulls enemies towards the impact point of each hit.

Harp Crossbow's "Even More Projectiles" is an innate Multishot which increases the number of arrows fired on each shot.

Hawkbrand's "Increases critical hit chance" is an innate Critical Hit which gives you a chance to deal triple damage on each hit.

Heartstealer's "Leeches Health from Mobs" is an innate Leeching which restores your health equal to a portion of the mob's health that you defeated.

Highland Axe's "Stuns Mobs" is an innate Stunning which grants a chance to stun an enemy per hit.

Slayer Crossbow and Lightning Harp Crossbow's "Chance to ricochet" is an innate Ricochet which gives arrows a chance to hit another nearby enemy on impact.

Nameless Blade's "Weakens Enemy Attacks" is an innate Weakening which reduces the damage dealt by mobs that you attack.

Venom Glaive, The Green Menace, and Nightmare's Bite's "Spawns Poison Clouds" is an innate Poison Cloud which gives attacks a chance to spawn a poison cloud that deals continuous damage in an area.

Nocturnal Bow's "Steals Speed" is an innate Tempo Theft which steals the speed of the mob that you shoot for a short duration.

Chance for Arrows to Explode

Red Snake's "Chance for Arrows to Explode" is an innate Fuse Shot which makes some of the arrows explode seconds after impact.

Stormlander's "Fires Lightning Bolts" is an innate Thundering which gives attacks a chance to damage nearby enemies with lightning.

The Last Laugh's "Mobs Drop More Emeralds" is an innate Prospector which increases the chances of mobs to drop emeralds upon death.

The Slicer's "Chance to fire piercing bolts" is an innate Piercing which makes some arrows pierce through multiple enemies.

Truthseeker's "Increased damage to wounded mobs" is an innate Committed which increases damage dealt to enemies as their health decrease.

Whispering Spear's "Sometimes Strikes Twice" is an innate Echo which makes some attacks to be followed up immediately with another.

Ember Robe's "Burns Nearby Enemies" is an innate Burning which damages nearby enemies every 0.5 seconds.

Frost Bite's "Spawns a Snowy Companion" is an innate Snowball which stuns a nearby enemy with a snowball.

Highland Armor's "Gains Speed after Dodge" is an innate Swiftfooted which increases your movement speed after rolling.

Register as a member and get all the information you want. (It's free!)
Login
Opinions about an article or post go here.
Opinions about an article or post
We at Game8 thank you for your support.
In order for us to make the best articles possible, share your corrections, opinions, and thoughts about "Explanation of Weapon and Armor Effects" with us!
When reporting a problem, please be as specific as possible in providing details such as what conditions the problem occurred under and what kind of effects it had.