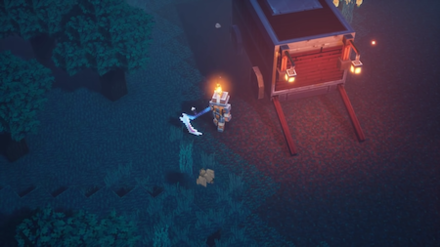 In lieu of a class system, Minecraft Dungeons sports a variety of armor which can transform your player from a tank, to a fast attacker, to a spellcaster. Learn about all the different Armor, and the stats and effects of each!

How to Use Armor 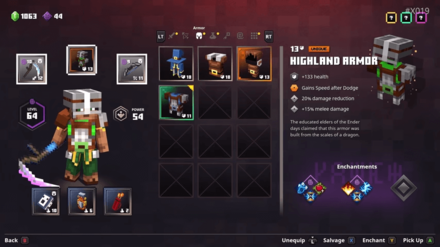 Click to see the details of the inventory screen!

As Minecraft Dungeons has no Classes or Abilities inherent to each character, Weapons and Armor play a more significant role than other games in determining a player's battle style.

Armor provides a number of benefits to a player, including boosting their max Health, reducing the damage they take, and other effects unique to a given type of Armor. 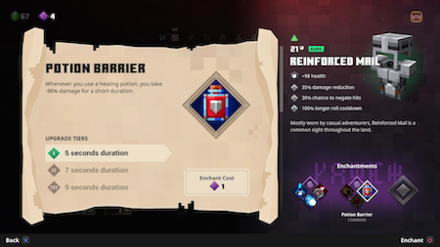 As with Weapons, each piece of Armor is outfitted with Enchantments which provide additional useful effects. An effective pairing of Enchantments to Armor can make for an unbreakable defense! 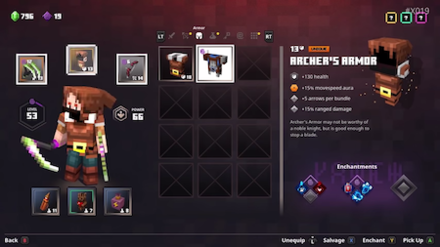 As you progress through the game, you'll frequently switch out for superior Weapons and Armor found on your adventures. You can put your old Weapons and Armor to good use by salvaging them, which will yield some amount of Emeralds; in addition, the Enchantment Points already spent on that Armor will be returned. Be sure to Salvage your old gear so you have plenty of Enchantment Points to soup up your new Armor with!

Note: If you have found an armor that is not yet on the list below, please let us know in the comments section with a screenshot of the armor and we'll add it to the list! Thank you!

How to Get All Unique Armor

what is your fav weapon?

The list has grown bigger since I last saw it. Nice.

Register as a member and get all the information you want. (It's free!)
Login
Opinions about an article or post go here.
Opinions about an article or post
We at Game8 thank you for your support.
In order for us to make the best articles possible, share your corrections, opinions, and thoughts about "List of Armor" with us!
When reporting a problem, please be as specific as possible in providing details such as what conditions the problem occurred under and what kind of effects it had.