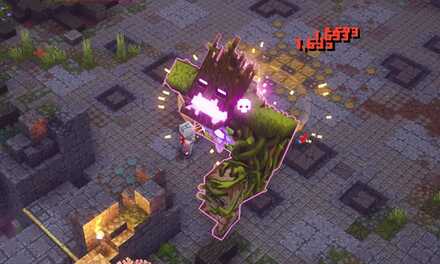 This is a strategy guide for beating Jungle Abomination, a Boss in the game Minecraft Dungeons from the Jungle Awakens DLC. Learn about Jungle Abomination's attack patterns, weaknesses, and tips and strategies for defeating them. 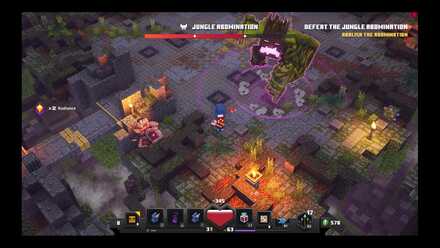 The Jungle Abomination, fought at the end of Overgrown Temple, is a giant Golem that summons mobs and tries to squish you with its fist or stab you with its tendrils. 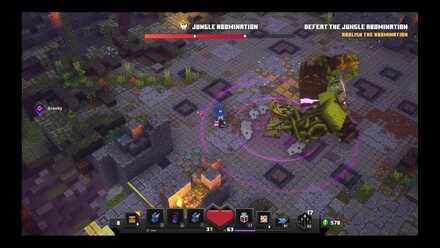 The Jungle Abomination will bring its arm up preparing to attack then after a moment will slam the ground with its hammer arm, sending out a shockwave on impact. It damages you in a wide area in front of it. 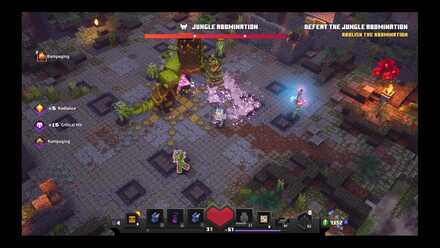 The Jungle Abomination summons Whisperers and Leapleafs that will attack you and make the fight harder. The Whisperers can even summon Poison-Quill Vines, making it even harder. 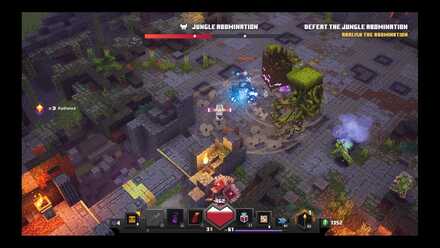 The Jungle Abomination put its tendril arm into the ground, and after a brief moment, wiill send multiple tendril out of the ground to damage you. It is much faster than the slam attack and can hit from afar.

Tips and Strategies for Beating the Jungle Abomination 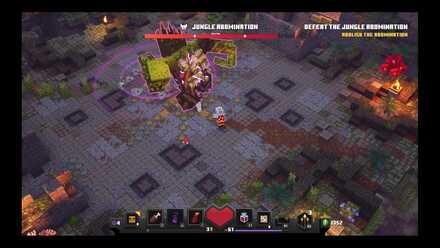 Its slam attack hits a wide area in front of it. If you want to attack it with your melee weapons, you best bet is behind it! Luckily it moves pretty slowly and does its slam attack pretty slowly. Take advantage of those and get behind it and start swinging!

Deal with the Whisperers ASAP 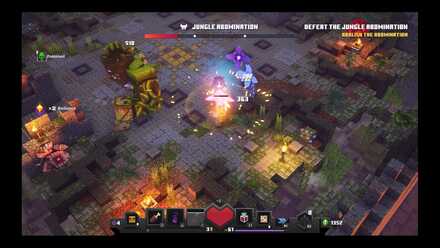 The Whispers can be a huge problem if left alone. The vines they summon can make it hard to dodge the Abomination's attacks, they can also summon Poison-Quill Vines, adding more damage against you!

Watch the Ground for the Tendrils 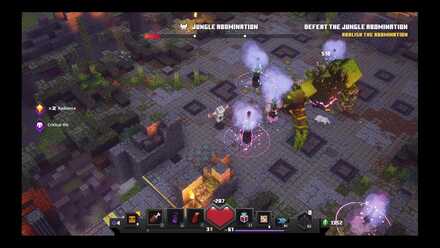 When the Jungle Abomination put its arms into the groun, immidiately keep your eyes on the ground near you. Right before the tendrils come out, you will see indicators of where they will come out. Get away from them and you will be safe from the tendrils!

Go All Out When it's Vulnerable 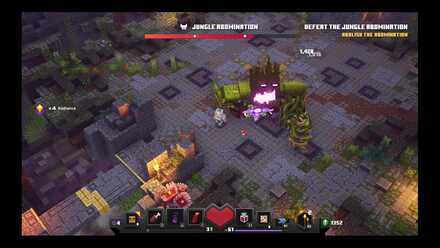 There are some moments where it will start roaring. This is the best chance to drop your defense and go all out on offense! It will not be doing any attacks for a few seconds, giving you a chance to swing like a mad man.

Register as a member and get all the information you want. (It's free!)
Login
Opinions about an article or post go here.
Opinions about an article or post
We at Game8 thank you for your support.
In order for us to make the best articles possible, share your corrections, opinions, and thoughts about "How to Beat Jungle Abomination | Jungle Awakens Boss Fight Guide" with us!
When reporting a problem, please be as specific as possible in providing details such as what conditions the problem occurred under and what kind of effects it had.