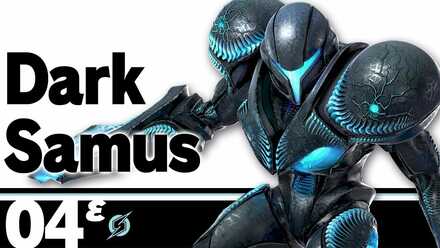 This is a guide to using Dark Samus in Super Smash Bros. Ultimate. Dark Samus's bread and butter combos, how to unlock, frame data, alt costumes and skins, as well as Dark Samus's matchups, counters, and tier list placement can all be found here.

Just like regular Samus, Dark Samus is very good at long to mid range, allowing it to use its specials to keep opponents away and limit their options. It has access to KO moves such as Charged Shot, Forward Aerial, as well as its up throw, and also has relatively good aerial attacks.

Conversely, Dark Samus struggles at close range, and will have a hard time dealing with characters who have reflectors / energy absorbing attacks, as well as quick characters with good frame data. Bombs (Down B) and B Reversing can be used to mix up its movement, allowing you to bait your opponents and land a charge shot to seal stocks.

For the most part, changes between Samus and Dark Samus are mainly aesthetic, although there are a few very minor differences with some of their moves. Dark Samus has a slightly better roll, and a few moves with slightly larger hitboxes, so if you are unsure of which Samus to use, Dark Samus is the better option.

1. -2 = Disadvantage. -1 = Slight Disadvantage or Even. 0 = Even. +1 = Slight Advantage or Even. +2 = Advantage.
2. The matchup chart was based around both the opinions of professional players of each character, as well as our own experience through playing Dark Samus.
3. Characters within each tier are unordered
4. Pokemon Trainer's individual Pokemon (Squirtle, Ivysaur, and Charizard) as well as Echo fighters with no significant difference than their regular counterpart are not shown.
5. For other characters who are not shown here, we are still investigating the matchup.

With a wide variety of projectiles, as well as a good OOS option, Dark Samus has a good matchup on big body and slow moving characters, as well as characters who cannot safely pressure shield. Thus, characters like Ganondorf, Kirby, and Piranha Plant, who are slow and cannot effectively counter its projectiles, will have a hard time closing the gap to fight up close.

Characters with reflectors can turn Dark Samus's main line of offense against it, and it also cannot fight up close against characters with good frame data, so characters like Fox and Wolf are extremely difficult matchups for it. Duck Hunt is a character who is also able to counter with its own zoning, which can make it hard for Dark Samus's projectiles to hit their mark.

How to Beat Dark Samus

Close the gap and see how DarkSamus reacts

As Dark Samus has no real reason to fight up close, it will usually stand near the ledge and use a mixture of missles and charge shot. It's up to you to weave through its projectiles to get in close, using a mix of jumping, shielding, spot dodging, and parrying. Once you get up close, Samuses will typically do one of three things: grab (most common), short-hop fair (2nd most common), or shield (3rd most common). A good Dark Samus will mix this option up each time, but some of them have one particular option they prefer, so watch out for it and try to counter.

If you expect the Dark Samus to grab, jump just before entering its grab range to hit it with an aerial. If you expect it to use Fair, shield and punish with an out of shield option. And if you expect it to shield, go for a grab, or bait out its Up B with a safe aerial, then punish. Note that there are other options they might pick as well, such as spot dodging or going offstage, so take a mental note of which options they go for most frequently.

This is Dark Samus's #1 tool in neutral, as it does damage and KOs at higher percents. Never forget that it might use it at any time, and if it is fully charged, you will see it blinking. Be aware of when charge shot is ready, and have a plan to either dodge or counter it before it hits you. Reflectors can send it back, energy absorbers (PK Magnet, etc) can absorb it, and certain items (all of the Link's bombs, etc) can nullify it. When uncharged, many aerials can even nullify it, so your whole game plan should be based around how to work around this move.

Up Special is by far Dark Samus's best out of shield option, at only 4 frames. It's quick startup is enough to punish most moves, but beware that if missed, Dark Samus will go into helplessness and be easy to punish. Shield grab takes 19 frames, so it is not viable in terms of on OOS punish, unless the move hitting shield was extremely slow.

The move hits twice, but due to the second hit's long startup, it often doesn't connect, so it's usually a good idea to stop before it comes out.

Sends opponents upward, and can cross up shields, although it has significant endlag, making it punishable, and it does not combo. It is a decent KO option at higher percents though.

This is a pretty quick move with decent range. The hitbox on Dark Samus's foot deals the most damage, so it's important to space properly. Can also be angled up or down.

With relatively low endlag, this is a decent move to throw out against opponents above you. It can also be used to hit opponents on the ledge after their invulnerability runs out.

Dark Samus's down tilt has quick startup, but lots of endlag, and is very unsafe on shield. It is easy to counter if whiffed, so don't throw it out mindlessly.

At 10 frames, it has pretty decent startup. Sends opponents very far forward, so it is a good KO option.

Dark Samus attacks above itself, so it usually won't hit grounded opponents. From start to finish, it is a long move, so beware of endlag. A decent oos option, but not her quickest.

Attacks in front of and behind Dark Samus. It is Dark Samus's fastest smash attack, and can be used to hit opponents grabbing on the ledge.

This move has pretty decent horizontal knockback, and is -5 on shield, so it is somewhat safe. Landing it will allow Dark Samus to put some space in between her and an opponent, letting her play at mid/long range where they do best. Can also be used for edgeguarding and KOing.

With its range and long lasting hitbox, this is a good move for opponents getting in close. It's unsafe on shield, so the main place to use it is either after a down throw, when recovering from ledge (drop down, jump, fair), or when reading a jump.

Dark Samus's back air has great range, and is the strongest of her aerials. It is -9/-10 on shield, so not exactly safe, although it is a good KO move, and can even be comboed into from an uncharged neutral B.

Dark Samus's fastest aerial. If it hits, you can follow up with another up air, or an up special. Good for juggling opponents.

The move has rather slow startup, but it does have a meteor hitbox, so you can spike opponents trying to recover low. If it hits an opponent on stage, you can follow up with an up air or up special.

Perhaps the most important part of Dark Samus's gameplan. Pressing B will initiate a charge, and pressing it again will release it. Once fully charged, it can be released at any time with B, to deal around 30 damage to an opponent, which also KOs at higher percents.

While charging, jumping, shielding, rolling, or spot dodging will allow you to cancel the charge so you can resume later (if midair, double jumping or air dodging also works). Charge the move at any spare opportunity you have (such as after KOing, or when you don't think you will be able to get an edgeguard), and try to read your opponent's movement to hit them in the air or offstage.

Fires a missile straight ahead which, when a smash input is used, will become a stronger missile. These are used in conjuction with charge shot for stage control and to limit and opponent's movement. One super missile and two homing missiles can be out at a single time.

This move has incredibly fast startup, and is great as an out of shield option. Dark Samus becomes invulnerable during its startup, allowing her to sometimes stage spike opponents who try and edgeguard her offstage. It also deals considerable upward knockback, so it can be used to KO.

Another projectile that can be used for stage control. This move is also very useful for mixing up Dark Samus's recovery, as it allows her to stall her movement. In some cases, it can be used to 2-Frame opponents.

Dark Samus's forward throw doesn't have much knockback, so it is only really used to throw opponents offstage if Dark Samus is facing that direction. Use it to set up an edgeguard.

If you are standing at the edge and you catch an opponent with a grab, it can be used to throw them offstage. At higher percents it can KO.

This move can KO at higher percents (150%+), so it is a KO option from midstage.

At low to mid percents, this sets up for a combo into Fair. When an opponent moves in to Dark Samus and you read that they will shield, grabbing them, then using down throw into Fair is a good option to send them away.

How to Unlock Dark Samus

There are three ways to unlock Dark Samus. Completing any of these, then defeating Dark Samus when they appear in the “a New Challenger Appears” screen will allow you to use them afterward. 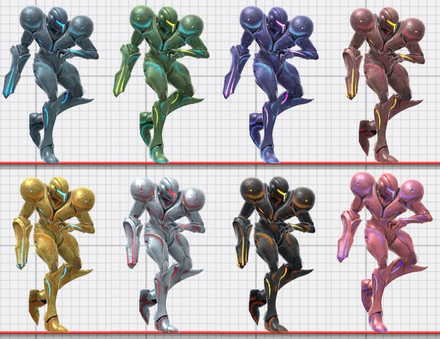 In order for us to make the best articles possible, share your corrections, opinions, and thoughts about 「Dark Samus Guide: Matchup Chart and Combos | Super Smash Bros Ultimate」 with us!