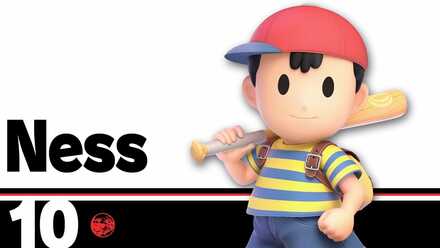 This is a guide to Ness in the game Super Smash Bros. Ultimate. Everything about Ness, including how to unlock them, bread and butter combos, frame data, alt costumes and skins, as well as Ness matchups and counters, can be found here.

A character with strong aerials and a kill throw

Ness in Smash Ultimate has powerful kill options in his aerial attacks as well as his back throw. This allows him to rack up damage using PK Fire (his side special) and his aerials (Fair and Uair), then KO opponents with Bair, Back throw, etc. All of his aerials are quick, and have a use in battle.

His largest weakness is his recovery, which is both difficult to navigate, and easy for opponents to exploit. Since you have to aim PK Thunder (Up B) at Ness for him to recover, the movement is somewhat easy to mess up, and leaves Ness vulnerable. Additionally, Ness has somewhat poor range, meaning he often struggles against characters with large disjointed hitboxes, such as swordies.

1. -2 = Disadvantage. -1 = Slight Disadvantage or Even. 0 = Even. +1 = Slight Advantage or Even. +2 = Advantage.
2. The matchup chart was based around both the opinions of professional players of each character, as well as our own experience through playing Ness.
3. Characters within each tier are unordered
4. Pokemon Trainer's individual Pokemon (Squirtle, Ivysaur, and Charizard) as well as Echo fighters with no significant difference than their regular counterpart are not shown.
5. For other characters who are not shown here, we are still investigating the matchup.

Ness doesn't have the best out of shield options, with his fastest option at 8 frames (neutral air), meaning that many moves will be hard to punish from shield. Depending on the situation, you will want to use the best option available, such as grab or up smash, but for safer moves, you best option will be to roll away and reset, as you may be unable to punish shielded moves.

With quick startup, Ness's jab is used as a get-off-me tool, such as against an opponent trying to punish his landing.

With its long lasting hitbox, Ness's dash attack is a good approach tool. It has a little bit of endlag, so overusing it can get you punished however.

Ness's forward tilt is pretty quick and can send opponents away. It is mostly used for putting space between you and an opponent.

Ness's up tilt is a quick move that is a decent combo starter at low percents.

With its fast startup, down tilt is a good get off-me-tool to put some distance between Ness and an opponent. It can two-frame opponents, and can combo into other moves like forward tilt.

Ness's forward smash has a pretty slow startup and considerable endlag, but it deals good knockback on opponents, so it can be used to KO at higher percents (and is one of the strongest smash attacks when hitting an opponent with the sweetspot). It also has the added ability of reflecting projectiles, which will increase the damage they deal upon return.

Ness's up smash is pretty quick, and can be used at the ledge to try and cover jump. Typically down smash is better to use for edgeguarding, so up smash can be used when you didn't have time to set up down smash.

By charging down smash at the ledge, Ness has a very powerful edgeguarding option that prevents opponents from recovering.

With its quick startup, Ness's neutral air is good approach for whiff punishing opponents. It can also be used to counter reckless aerial approaches from opponents, giving it a lot of versatility. It is also safe on shield (-4/-5)

Ness's forward air has a long lasting hitbox, and is powerful against opponents who like to jump a lot. It is a good combo tool as well, and against large characters, Forward Air → Fast Fall → Forward Air should combo.

Ness's back air deals great knockback on the initial hitbox. It's also -5/-6 on shield, so it is difficult for many characters to punish, and can be used to apply pressure and finish off an opponent's stock.

Up air has good knockback, and a long hitbox. Use it for juggling and to drag down opponents for a combo, or to KO when they are high enough in the air.

Ness's down air has a meteor hitbox at the tip, so it can be used to spike opponents. It has a pretty big hitbox, and little lag for a meteor, so it's a great move to use offstage. It is -7/-8 on shield.

Although very slow, this move is incredibly powerful. It can be charged and sent horizontally to detonate, so it is mainly useful for edgeguarding.

An essential part to Ness's gameplay, PK Fire is a powerful projectile that will create a pillar of fire after making contact. If it hits an opponent, they will have a hard time breaking free, so it can be used multiple times, or followed up with a smash attack while they are stunned.

PK Thunder is used for racking up damage, edgeguarding, and so Ness can recover. It can be freely controlled, making it a no-risk way to deal with opponents offstage.

It is somewhat difficult to use as a recovery, so it is important to practice if you plan on using the character. To recover, Ness needs to redirect the thunder so that it hits him and boosts him toward the stage. If Ness uses PK thunder on himself and launches into an opponent, it will deal significant damage and knockback.

Ness's down special is an energy absorber that can absorb energy based projectiles and weak explosions to recover HP. Using it in the air will also slightly knockback opponents, making it a good move to use against opponents trying to catch your landing. Additionally, it can be used to combo into other moves.

Ness's forward throw does not combo or KO, so it is mainly used for gaining stage control, or to put an opponent offstage.

Ness has a very powerful back throw, which can KO opponents when used near the ledge.

Up throw puts opponents up into the air, and is mainly only good against opponents with poor disadvantage, so that they can be juggled.

Ness's down throw knocks opponents slightly upward so he can combo into an aerial. You can follow it up with multiple forward airs in some cases, so it's a great combo starter.

How to Unlock Ness

There are three ways to unlock Ness. Completing any of these, then defeating Ness when they appear in the “a New Challenger Appears” screen will allow you to use them afterward. 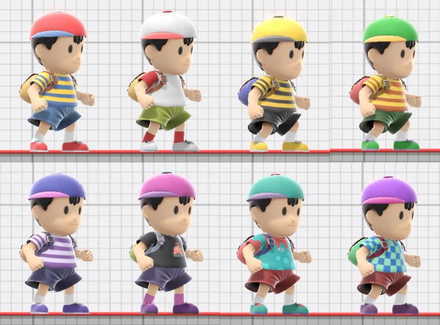 Register as a member and get all the information you want. (It's free!)
Login
Opinions about an article or post go here.
Opinions about an article or post
We at Game8 thank you for your support.
In order for us to make the best articles possible, share your corrections, opinions, and thoughts about "Ness Guide: Matchup Chart and Combos" with us!
When reporting a problem, please be as specific as possible in providing details such as what conditions the problem occurred under and what kind of effects it had.