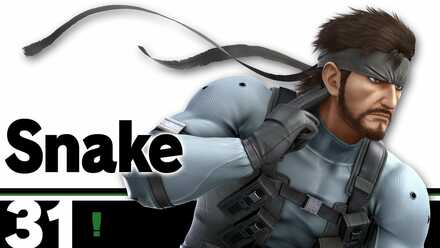 This is a guide to using Snake in Super Smash Bros. Ultimate. Snake's bread and butter combos, how to unlock, frame data, alt costumes and skins, as well as Snake's matchups, counters, and tier list placement can all be found here.

A long-ranged zoner with powerful projectiles and normals

Smash Ultimate Snake has several powerful normals (Jab, Dash Attack, and Tilts), which allow him to keep opponents out with his specials, and brawl when up close. Snake players should use his arsenal of projectiles (B, Side B, Down B) to limit their opponents options and rack up damage. In addition to his powerful explosives, Snake can use his fast and heavy hitting up tilt (↑ + A) to finish out his opponents' stocks.

1. -2 = Disadvantage. -1 = Slight Disadvantage or Even. 0 = Even. +1 = Slight Advantage or Even. +2 = Advantage.
2. The matchup chart was based around both the opinions of professional players of each character, as well as our own experience through playing Snake.
3. Characters within each tier are unordered
4. Pokemon Trainer's individual Pokemon (Squirtle, Ivysaur, and Charizard) as well as Echo fighters with no significant difference than their regular counterpart are not shown.
5. For other characters who are not shown here, we are still investigating the matchup.

Snake doesn't have the best out of shield options, due the fact that most of his aerials have somewhat long startup. The exception to this is down air, which comes out in just 6 frames, making it his safest option. The downside to this move is the fact that it only hits below and slightly to the side of Snake, meaning that it will not always connect, depending on the opponent's position.

Snake's grab has pretty decent range, but slow startup, so it should only be used when an opponent hits your shield with a very unsafe attack. Up Smash has a hitbox that comes out directly in front of Snake and combos into the projectile, but the projectile itself has long startup, so it is not going to be quick enough to punish opponents who attack from above.

Jab is Snake's fastest attack, making it a great tool to get opponents off of you at close range.

Snake's dash attack comes out very fast and has a long hitbox. During the attack, his upper body is invulnerable, making this a great move to use against landing opponents. It can combo into itself, and crosses up shields, making it great for both approaching and getting away from the opponent. It is a very useful tool in Snake's kit.

Snake's forward tilt also has good startup, high damage, and good knockback. Although slightly slower than Snake's jab, it can be reversed, making it one of his main tools for close-range combat. The attack has two hits, but you can use just the first hit for poking at shields.

Snake's up tilt has very high knockback and fast start up. Its knockback power rivals that of a smash attack, making it ones of Snake's main KO moves. It has a short range though, make sure you are close enough to an enemy to hit them with it. It can kill around 100%, and at later percents, can be comboed into from down throw.

Down tilt has good range and comes out fast. It has a longer hitbox than forward tilt, but it is shorter vertically. It is mostly used to poke at opponents or hit an opponent close to the ground.

Snake's forward smash is a slow and very powerful attack where he shoots at the ground with an RPG. It is quite difficult to actually land the attack due to its slow start up, but it can KO foes even under 100%. This attack has a lot of endlag too, so it can easily be whiff punished if used recklessly. It deals a ton of shield stun, so despite being very laggy, it is somewhat hard to punish out of shield for some characters.

Snake's up smash fires a explosive from a mortar into the air. If it lands, it will explode and cause AOE damage. Snake's up smash is unique in that if you charge the smash attack, instead of damage increasing, the height of the mortar will increase. Note that it can be reflected by opponents.

Down smash comes out fast, and is very strong, but its low hitbox makes it difficult to hit a jumping opponent, so it's mostly for punishing rolls.

Snake's neutral air is a powerful move in Snake's arsenal. It has multiple hits and can lead into combos if fast falled onto an opponent. However, it has slow startup, so it doesn't work well as a combo breaker. Neutral air, as well as all of Snakes aerials, is not a safe move on shield, so instead rely on ground attacks or projectiles for poking.

Snake's forward air has good damage and knockback. It comes out slow, but the end of his leg has a meteor hitbox and can KO opponents early used to spike offstage.

Snake's back air comes out fast and has excellent knockback. However, this move has heavy endlag upon landing, and can be easily punished. None of its hitboxes are safe on shield.

Snake's up air is a strong attack with good knockback. Up air can KO opponents if hit in the air at higher percents. However, this move has significant landing lag, so only use it when your opponent is high in the air. When they are lower to the ground, try using up smash instead.

Snake's down air has excellent start up and deals good damage. While the attack comes out fast, the hitbox only hits directly below and diagonally, making it difficult to use as a combo breaker. Since the move is Snake's fastest aerial, it is a decent out of shield option for up close opponents.

Snake's neutral special throws a grenade at your opponent. After pulling the pin, it takes 2.5 seconds until it explodes. This explosion can also injure Snake (although he takes less knockback).

If you keep holding neutral B while playing as Snake, you can move left, right, and jump while throwing. The grenade can be thrown in 3 different directions depending on the control stick input. When you want to cancel your movement, push the shield button. When you cancel, the grenade will drop where you are standing, allowing it to be used like a regular item.

Throwing this grenade at an opponent won't lead to any follow-ups generally, so instead of attacking by throwing it after picking it up, you can continue shielding while holding the item. When your opponent goes to grab you, they will be caught in the blast, and that can lead to a follow up.

Snake's side special controls a missle that explodes upon impact. It can be moved with the control stick, but Snake cannot move during this time. When you want to stop controlling it, press the shield button to cancel the missle. This attack is great for edgeguarding opponents, as it is a risk free way for Snake to get offstage kills.

Snake's up special has him hold on to a cypher while it pulls him up. After the move is activated, it can be canceled by attacking or dodging. If the move ends from taking too much damage, it can be activated again. While this move can be abused by your opponent, weaker attacks (an attack that deals under 7%) will not stop your recovery, due to its armor.

Snake's down special plants C4 into the ground. The explosive can be attached to walls, the ground, and even opponents. If you use down special a second time, it will detonate the bomb, causing an explosion. Snake will also take damage from the mine, so be careful when detonating it. The explosion can also be used on Snake to assist with recovery.

Snake's forward throw sends opponents too far away to connect any combos, so it is used for stage control.

Snake's back throw sends your opponent straight back. It has little endlag, allowing you to move right after you throw. Connect this throw into a dash attack at lower percents.

Throws your opponent straight forward. After throwing, up tilt or up air can connect.

Snake's down throw lays your opponent gently down on the ground. At high percents, your opponent cannot move for some time, allowing this throw to combo into kill confirms such as up tilt.

How to Unlock Snake

There are three ways to unlock Snake. Completing any of these, then defeating Snake when they appear in the “a New Challenger Appears” screen will allow you to use them afterward. 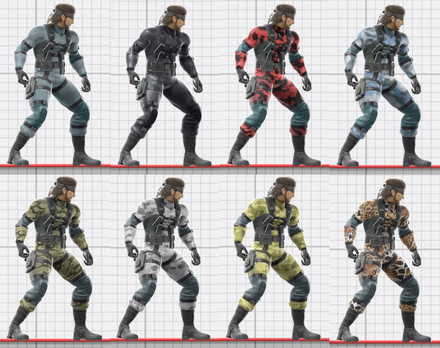 In order for us to make the best articles possible, share your corrections, opinions, and thoughts about 「Snake Guide: Matchup Chart and Combos | Super Smash Bros Ultimate」 with us!