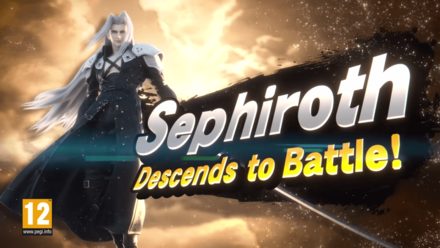 This is a guide to using Sephiroth in Super Smash Bros. Ultimate. Sephiroth's bread and butter combos, how to unlock, frame data, alt costumes and skins, as well as Sephiroth's matchups, counters, and tier list placement can all be found here.

A swordie with extreme range and powerful specials

Sephiroth has a sword which gives him extreme range on most of his aerials and normal attacks. He also has access to some specials that can deal massive damage. In particular, his neutral B can be charged and released to emit a powerful explosion, which is great for edgeguarding. When Sephiroth is at a disadvantage, he gains his one-winged form, which gives him another jump, armor on his smash attacks, higher mobility, as well as higher damage and knockback. Clever use of this comeback mechanic is vital for KOing opponents quickly.

While Sephiroth is very powerful with his Winged Form out, his biggest advantage comes from his extremely light weight (the same as Pikachu), and mediocre frame data. In addtion to having few moves with fast startup, his moves also have considerable endlag, making them easy to punish. He has a poor disavantage state and is easily comboed, so Sephiroth players will need to use his superior range to space out opponents.

1. -2 = Disadvantage. -1 = Slight Disadvantage or Even. 0 = Even. +1 = Slight Advantage or Even. +2 = Advantage.
2. The matchup chart was based around both the opinions of professional players of each character, as well as our own experience through playing Sephiroth.
3. Characters within each tier are unordered
4. Pokemon Trainer's individual Pokemon (Squirtle, Ivysaur, and Charizard) as well as Echo fighters with no significant difference than their regular counterpart are not shown.
5. For other characters who are not shown here, we are still investigating the matchup. 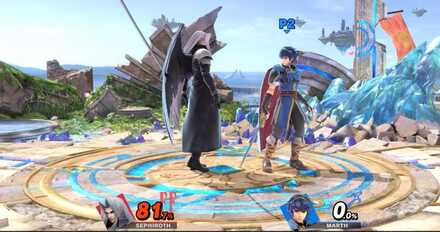 Winged Form will appear depending on how disadvantaged he is. When the enemy has more stocks than you, Sephiroth will transform even with minimal damage. If you're at an advantage, it can take at least 100% damage or more for the wing to appear.

Jab Attack is his fastest move

Sephiroth's jab attack is a fast move, so it can function as your get-off-me tool.

Sephiroth's dash attack can launch enemies and can even kill at high percentage. It can easily be punished on shield so don't use it too much, or your opponent may see it coming. 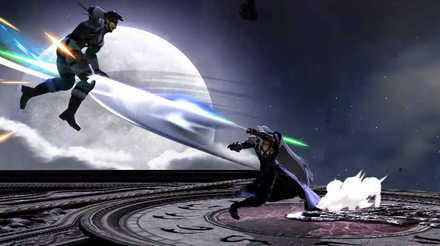 Sephiroth's forward tilt is a long slash. It can be angled upward or downward depending on the situation. 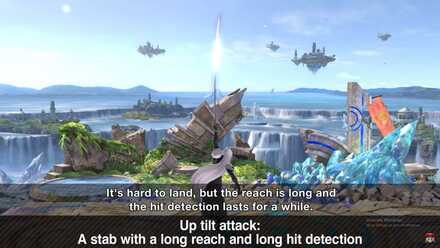 While Sephiroth's Up Tilt has a long hitbox duration, its hitbox is quite narrow, which makes using it hard. Furthermore, Sephiroth's torso gains a short invulnerability when he raises his sword.

Down Tilt can be used to catch enemies who have their guard down, or it can also be used as a quick maneuver as the dash can cover a lot of distance, and lets Sephiroth both approach and get away. 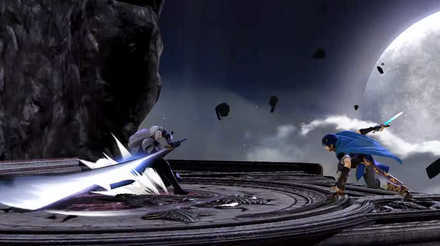 Sephiroth's forward smash has massive range, great damage, and great knock back power. It's very good against opponents who try to recover from offstage, but be wary when using it against enemies near you as it has a lot of end lag. It can even be punished by enemies that block the attack from a distance. 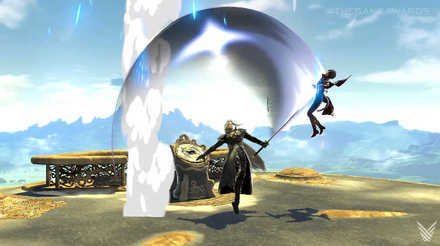 Up smash makes Sephiroth slash upwards starting from his left side in a 180 degree arc above him. It has massive range and can even hit the 2nd platform in battlefield stages. Similarly to his FSmash, it has a lot of endlag so avoid spamming this move.

Sephiroth's Down Smash is a move that can create rubble that also hits the enemies. It's a great shield breaker, so you can use it against enemies that are too comfortable with their shield.

The Down Smash attack won't create rubble if it doesn't hit the ground. The sword will still remain there though, so you can use it to prevent your opponents' recovery. 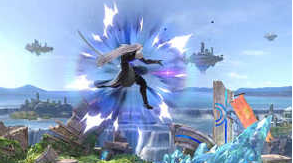 Sephiroth's Nair can hit enemies around him while in mid-air. It has a quick start up, so it can be used to catch enemies unaware, or combo. It can also be used to hit enemies trying to recover and is a pretty versatile move overall. 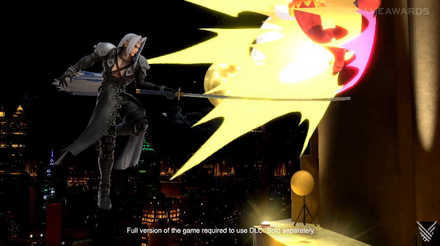 You can use Sephiroth's forward air to stab the stage and cling to walls. This is used to mix up your recovery, gain an extra jump, or to dodge an enemy's attack when they're trying to gimp your recovery.

Back Air, while slower, can deal more damage and has more knock back than Fair. Use it against enemies trying to recover from offstage. Similar to forward air, you need to use it early while in the air if you wish to hit enemies on the ground.

Sephiroth's up air is an upward slice with his sword with a large arc covering the space above him. In terms of range, it is similar to up smash. It has quite a bit of lag when landing, so be careful not to throw it out recklessly when an opponent is near the ground and able to punish you. 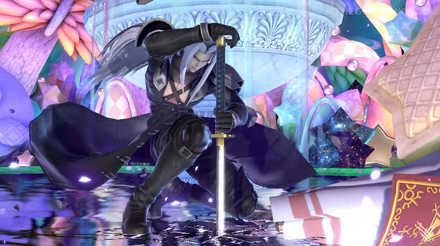 Sephiroth's down air is a dive attack that has a lengthy hitbox by using Masamune to stab downwards. It has a meteor effect, but since it's a dive attack, it's not advisable to use it offstage. 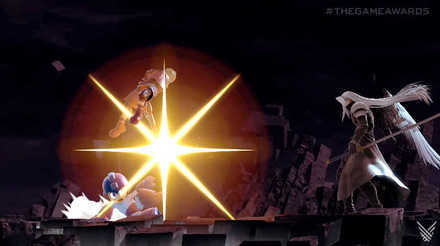 Sephiroth's neutral special is a move that can be charged. Its form changes from Flare to Megaflare into Gigaflare. Each move's range decreases the more level it gains, but its damage increases to compensate. The charge can be cancelled by shielding but you don't get to keep the charge like Samus' Neutral Special. When used offstage it is an extremely powerful edgeguarding tool. 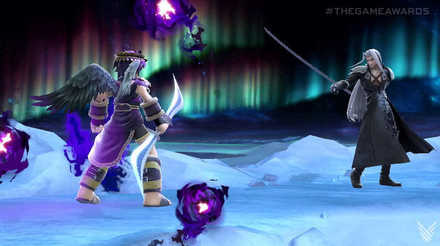 Despite the flimsy animation, Shadow Flare is a lethal move that can cause KOs to enemies offstage. There will be black orbs circling around you if Sephiroth hits you with Shadow Flare, which will explode after a few seconds.

Blade Dash is Sephiroth's primary recovery move. It's a dash attack that inflicts minor damage against enemies, so you should use it mainly for mobility. 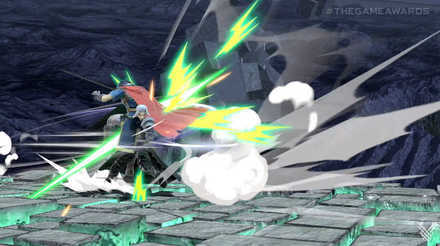 Octoslash is Sephiroth's charged up Blade Dash. As the name suggests, he slashes eight times while dashing which makes it a great move to KO opponents. 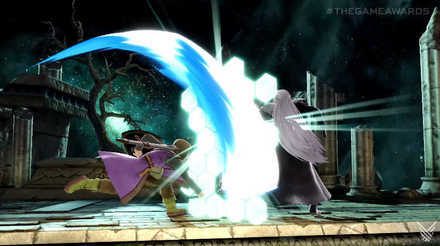 Scintilla is Sephiroth's down special. It's a move that counters enemy attacks in front of Sephiroth, and deals damage in return. Its damage gets increased by the enemy's attacks, and it will still attack even if no attack was recieved. Beware as it doesn't protect Sephiroth's back and it can be broken by strong attacks.

Forward throw just literally throws enemies forward. Against large fighters, the move can be connected with FAir. It's primary use is to throw enemies offstage.

Sephiroth teleports his enemies to his back and launches them backward. It can be followed up with an Fsmash that's angled upwards.

Sephiroth slashes the enemy and launces them upward. It can be followed up with a NAir for a quick combo.

Sephiroth slams the enemy downward and blows them slightly forward.

Supernova is one of Sephiroth's iconic move in the main franchise. All opponents hit will get random status ailments like a shield break, reversed controls, and more!

How to Get Sephiroth 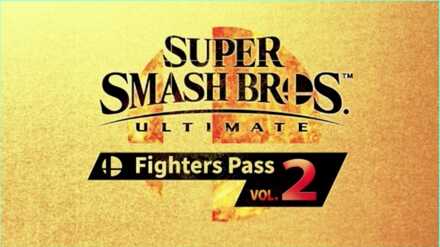 If you just want Sephiroth, you can purchase him individually by getting the Challenger Pack 7. It will cost $5.99 USD ($7.55 CA). 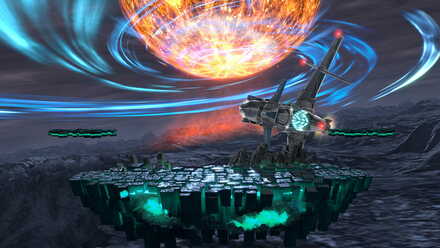 If you purchase Sephiroth via the Fighter's Pass or Challenger Pack, you will also gain access to a new stage: Northern Cave, as well as music from FF7.

In order for us to make the best articles possible, share your corrections, opinions, and thoughts about 「Sephiroth Guide: Matchup Chart and Combos | Super Smash Bros Ultimate」 with us!