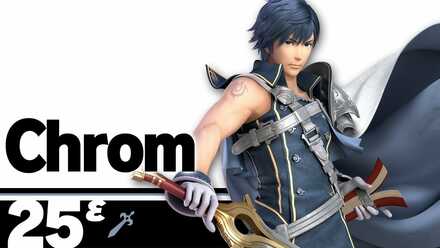 This is a guide to using Chrom in Super Smash Bros. Ultimate. Chrom's bread and butter combos, how to unlock, frame data, alt costumes and skins, as well as Chrom's matchups, counters, and tier list placement can all be found here.

A swordie with great frame data and range

Smash Ultimate Chrom is a swordie with great range, as well as great damage output and KO power. His high mobility and quick startup on his moves also allow him to apply pressure on opponents through a number of moves. Although an echo version of Roy, they have several differences, mainly in Chrom's lack of a sweetspot on the hilt of his sword, as well as a totally different recovery. Both character typically play an aggressive, rushdown style.

Speaking of recoveries, Chrom's recovery is his major weakness, since it provides almost no horizontal movement, making it difficult for him to get back to the stage. He also lacks a projectile or reflector, meaning that he will have to get in close to deal with zoners.

1. -2 = Disadvantage. -1 = Slight Disadvantage or Even. 0 = Even. +1 = Slight Advantage or Even. +2 = Advantage.
2. The matchup chart was based around both the opinions of professional players of each character, as well as our own experience through playing Chrom.
3. Characters within each tier are unordered
4. Pokemon Trainer's individual Pokemon (Squirtle, Ivysaur, and Charizard) as well as Echo fighters with no significant difference than their regular counterpart are not shown.
5. For other characters who are not shown here, we are still investigating the matchup.

Chrom has some pretty decent out of shield options, with his fastest one (up air) coming out on frame 8. However, it is not the best punish tool unless the opponent hits you from above, so generally up special or neutral air will be his go-to out of shield punish moves. Up B deals a lot of damage and knockback, has armor on its startup, as well as very good range, so it is a great out of shield move, although whiffing it can leave you open to a punish.

Chrom's jab is very quick, and is an important part of his kit. While it is good as a get-off-me tool at close range, it can also be used for ledge trapping, since it can be spammed at the edge without consequence. It sends opponents slightly upward, which can combo into a back air for one of Chrom's most reliable KO confirms.

Chrom's dash attack has rather slow startup, but great range and knockback. As opposed to Roy that deals more damage near the hilt, Chrom can use this more easily as any part of the attack will deal the same damage so feel free to try and hit the enemies at the edge of the attack to avoid getting punished.

Forward tilt also has good range, has quicker startup than dash attack, and can also KO opponents at higher percents, so using the sliding variant of it can often subsitute for dash attack, as it is a bit safer. It's a great tool for ledge trapping as well as getting surprise kills with its speed.

Chrom's up tilt is very fast, and will cover the entire area above Chrom to his back, so it is a good get-off-me tool. At high percents, it can also kill so try to use it against enemies that stands on platforms.

Down tilt is a very quick move, with very little endlag, so it is one of Chrom's poking tools, as it is -5 on shield. It can be spaced from a distance to try and pressure an opponent into picking an option.

Chrom's forward smash has excellent range and will deal great damage at any part of the attack. Thanks to its quick startup, it's a good move to use for surprise kills against enemies at mid to high percent.

Chrom's up smash deals decent damage and knockback. It has great range above Chrom, but its horizontal range is rather small, so its not a move you should throw out too much in neutral, and instead is used as an anti-air.

Down smash is Chrom's quickest smash attack. The first hit is as fast as some of his tilts, but it doesn't deal as much knockback as his other smashes, and it has the most endlag. It is mostly used for catching an opponent's roll, as the hit behind Chrom is more powerful than the first.

Chrom's neutral air is very quick, and essentially to his powerful aerial game. It is -6/-6 on shield, making it pretty safe to use as a tool for pressuring shields. It has two hits, which cover both the front and back of Chrom, so it is good for escaping disadvatage. Landing just the first hit only has a little bit of knockback, making it a great combo starter.

Chrom's forward air has great range, hitting the entire area in front of him. Its startup is a little slow compared to some of his other aerials, but it is -4 on sheld, making it very safe and good for pressuring opponents, and can also be used for edgeguarding.

Chrom's back air is powerful, dealing excellent knockback when the sweetspot hits. It is great for edgeguarding, and when used via a reverse aerial rush (jumping immediately after turning around mid-dash).Thanks to Chrom's attacks not having any sourspots, this move is a great move to use for enemies that try to recover by jumping, as landing any part of the attack can net you a kill.

Up air is Chrom's fastest aerial. It attacks a wide range above Chrom's head, so it is great for juggling opponents. It covers the area up to Chrom's back, so it can be used low to the ground as well. It can KO opponents at higher percentages.

Chrom's down air deals a lot of damage, and has a meteor hitbox. It has rather slow startup and endlag, so using it offstage presents a huge risk to Chrom given his poor recovery, so it is not a move you should use carelessly offstage.

Chrom's neutral special can be charged and released for a powerful strike. Its startup is rather slow, so it is not a move you should use super frequently, but if fully charged, it is one of the most powerful attacks in the game, making it an ideal shield break punish.

Chrom's side special is a 4 part attack where, similar to Marth or Lucina, you can alter the attack by holding up or down during the 2nd and 3rd strikes, givng it different utility according to the situation. Holding up is good for putting opponents in the air for a juggle, while holding down is good for dealing damage. Simply not holding any direction deals the most knockback, and if used by the ledge, can KO opponents extremely early.

Chroms up special makes him throw his sword upwards, catches it, then slam it to the ground. Enemies hit by any part of it will always take the full attack, which makes it a great out of shield option against enemies, as well as a combo finisher. When recovering, you can even use it to catch enemies and make them fall together with you (or in some cases, you can even make them fall while you get to cling to the ledge). It lacks horizontal recovery compared to Roy's Up Special, making it a somewhat poor and exploitable offstage recovery move.

Chrom's down special is a typical counter. The strength of the attack depends on how strong the opponent's attack was, and it works even on attacks that hit Chrom from behind. It is mostly used when reading an opponent's attack, or breaking an untrue combo, but it can also be used to edgeguard characters who have a hitbox and no invulnerability on their recovery. When used on the ground, it will deal more knockback.

Chrom's forward throw puts an opponent forward, so it it is good for stage control or putting an opponent offstage. It doesn't combo into anything.

Like forward throw, back throw is used for stage control or to put an opponent offstage. It doesn't combo into anything or KO.

Chrom's up throw can be used to put an opponent up into the air to try and juggle them with up airs. At around 200%, it can KO an opponent as well.

Chrom's down throw puts an opponent upward, allowing him to combo into one of his aerials, so it is a good combo starter.

How to Unlock Chrom

There are three ways to unlock Chrom. Completing any of these, then defeating Chrom when they appear in the “a New Challenger Appears” screen will allow you to use them afterward. 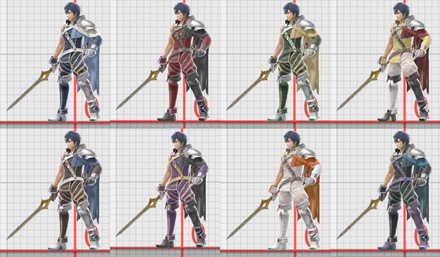 Register as a member and get all the information you want. (It's free!)
Login
Opinions about an article or post go here.
Opinions about an article or post
We at Game8 thank you for your support.
In order for us to make the best articles possible, share your corrections, opinions, and thoughts about "Chrom Guide: Matchup Chart and Combos" with us!
When reporting a problem, please be as specific as possible in providing details such as what conditions the problem occurred under and what kind of effects it had.