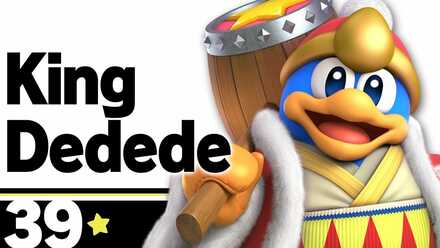 This is a guide to using King Dedede in Super Smash Bros. Ultimate. King Dedede's bread and butter combos, how to unlock, frame data, alt costumes and skins, as well as King Dedede's matchups, counters, and tier list placement can all be found here.

Smash Ultimate King Dedede relies on use of his Gordos (Side Special) for stage control, which can be used to bait opponents and land a powerful hammer blow with forward aerial, back aerial, or a forward tilt. He has multiple jumps, which can be combined with his aerials to bait and punish opponents. His neutral B also allows him to inhale and reflect projectiles.

However, as is often the case with heavyweights, King Dedede is slow and easily comboed, and his poor frame data makes him struggle against quicker characters. He also needs to be very careful of the way he uses his Gordos, as most attacks will reflect them back, which can hit and even KO Dedede.

1. -2 = Disadvantage. -1 = Slight Disadvantage or Even. 0 = Even. +1 = Slight Advantage or Even. +2 = Advantage.
2. The matchup chart was based around both the opinions of professional players of each character, as well as our own experience through playing King Dedede.
3. Characters within each tier are unordered
4. Pokemon Trainer's individual Pokemon (Squirtle, Ivysaur, and Charizard) as well as Echo fighters with no significant difference than their regular counterpart are not shown.
5. For other characters who are not shown here, we are still investigating the matchup.

King Dedede's poor frame data means that he has limited options to use out of shield, with none of them coming out in under 10 frames. Neutral air is his quickest option to use on opponents up close, and will allow Dedede to knock them away to continue zoning with gordos. Since his out of shield options are not particularly fast, Dedede will either want to retreat, or drop shield to follow up with down tilt for spaced opponents, or neutral b if the opponent is shielding.

King Dedede's jab has great range and a long lasting hitbox duration. Since the startup is slow, it's not the best get-off-me tool, but it can be used when reading an opponent's air dodge. At very higher percents, the rapid jab finisher can KO.

King Dedede's dash attack boasts powerful damage and knockback, although it has a very slow startup. Its hitbox is very close to the ground, so it can be used to 2-frame an opponent, or hit an opponent hanging on the ledge after their invulnerability has run up, which can allow for an early KO.

King Dedede's forward tilt has long range. Its long range can halt an opponent's advance from any direction, and it is a good move to use toward an opponent out of a fox-trot after dashing away from them. Its long range allows the attack to hit offstage against opponents that try to recover high.

King Dedede's up tilt has a quick startup. Since the attack also covers his back side, it can be used to hit an opponent who crosses up your shield. It combos well into Netural Air. Also, keep in mind you can KO your opponent with it at about ~150%.

King Dedede's down tilt has great range and decently quick startup. It has a decently long horizontal hitbox, so it's a good alternative to dash attack for whiff punishes.

King Dedede's forward smash is great for damage, range, and knockback. The hammer's head has the strongest hitbox, which can KO opponents at around 60%. Its slow startup and long endlag make it very punishable, so throw this move out to try and catch an opponent getting up at the ledge. If you use a Side Special to limit the opponent's movement, it will be easier to bait them into getting hit with this move.

King Dedede's up smash is great for damage, and knockback. It has a wide vertical range, so you can throw the attack out as an anti-air option, or to hit opponents who cross-up your shield.

King Dedede's down smash is also great for damage and knockback. It can be used to catch an opponent's roll. While it is King Dedede's fastest smash attack, it has the shortest range.

King Dedede's neutral air has a quick startup. It's mainly used as an approach too and combo starter, as well as a landing option. When properly spaced, it is -4/-6 on shield, making it a pretty safe poking tool.

King Dedede's forward air does great damage and has good range. It's mainly used for catching an opponent's jump (such as after throwing out a Gordo), or for edgeguarding offstage.

King Dedede's back air is great for damage and knockback. It's a reliable KO attack with little end lag, and when properly spaced, it is -8 on shield, making it a good poking tool.

King Dedede's up air is a high damage, multi-hit move. It has a wide range and a long duration, so it's a useful tool for juggling opponents in disadvantage.

King Dedede's down air has Meteor hitbox. However, since it has a slow startup and is difficult to land a hit with, it's best not to try and recklessly throw it out. Using side special at the ledge is generally a better option.

King Dedede's neutral special inhales opponents or projectiles. After inhaling, King Dedede can walk around with them and then spit them out. The damage of projectiles is increased by 1.5x when inhaled and then spat out.

Most of King Dedede's aerial attacks have significant ending lag, so mix in this move occasionally for an approach tool. Since it is a command grab, it will work on shielded opponents.

King Dedede's side special will launch Gordo with his hammer. This is one of Dedede's most essential tools in neutral, as he can use them to limit his opponent's movement and bait them into picking a punishable option. The Gordo's angle can be adjusted using up or down during the move's startup, and doing a smash input on the move will in crease the Gordo's launch distance. However, weak attacks (2% or higher) such as aerials or projectiles will send the Gordos right back at Dedede, so be ready to dodge or inhale them.

A Gordo angled upward covers a good vertical distance and hardly moves forward at all. It's most effectively used at the ledge or when used as a shield. It will also be easier to inhale and spit out much faster if angled upward.

A normally launched Gordo covers a greater distance, especially if you smash the control stick while inputting the move, and is used as a zoning tool or for knocking the opponents off the stage.

Lastly, a Gordo angled downward in the air has a high bounce angle, so it can be used to hit opponents that jump to try and avoid them.

King Dedede performs his signature high jump then crashes down with the weight of his body in his up special. You can cancel the dive portion of the move by grabbing the ledge, but if you are too late, he will SD. You can also cancel the dive portion by pressing the special button or up on the control stick. This will put him into helplessness, and he will not be able to jump, but since he can move left or right, you can still nudge your way over to the ledge.

King Dedede chargfes up and swings his hammer, boosted by jetpower, in his down special. The down special can be charged , leading to increased damage and knockback the longer it's charged. You'll know that you've reached maximum charge when King Dedede's facial animation looks like he is struggling, and he starts to take recoil damage.

Dedede gains super armo while swinging the hammer. The swing itself deals excellent damage and knockback. However, its high endlag and slow startup make it very risky to use, so it is mostly only used as a shield break punish resulting from a forward smash or side special.

King Dedede's forward throw smacks his opponent forward with his hammer. It's not good for combos, so it's mostly used to knock opponents off the stage. At very high percents, it can KO near the ledge.

King Dedede's back throw smacks his opponent backward with his hammer. It's likewise not good for combos, so it's also mostly used to knock opponents off the stage. At high percents, it can KO near the ledge.

King Dedede tosses his opponent upward with his up throw. It can lead into a juggle with up air, so it is the go to throw for racking up damage.

King Dedede tosses his opponent downward with his down throw. It sets up for a forward air, or lets you put an opponent offstage where you can try for an edgeguard.

How to Unlock King Dedede

There are three ways to unlock King Dedede. Completing any of these, then defeating King Dedede when they appear in the “a New Challenger Appears” screen will allow you to use them afterward.

Register as a member and get all the information you want. (It's free!)
Login
Opinions about an article or post go here.
Opinions about an article or post
We at Game8 thank you for your support.
In order for us to make the best articles possible, share your corrections, opinions, and thoughts about "King Dedede Guide: Matchup Chart and Combos" with us!
When reporting a problem, please be as specific as possible in providing details such as what conditions the problem occurred under and what kind of effects it had.