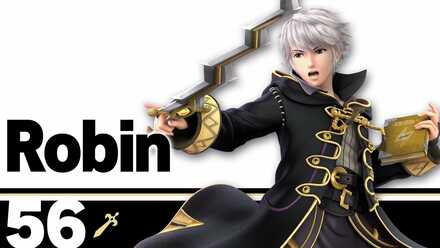 This is a guide to using Robin in Super Smash Bros. Ultimate. Robin's bread and butter combos, how to unlock, frame data, alt costumes and skins, as well as Robin's matchups, counters, and tier list placement can all be found here.

A fighter with powerful ranged magic

Smash Ultimate Robin excels in zoning out opponents through use of their neutral and side specials, which can keep opponents from getting in too close. Robin's Levin sword is also quite powerful, giving Robin access to combos and KO options. Their unique property lies in the fact that their weapons have durability and will be discarded after running out. When this happens, the weapons can be caught and used as items (meaning thrown at the opponent or comboed from).

Robin's main weakness is their poor mobility, with one of the slowest dash speeds in the game. They have poor out of shield options, meaning that they are unable to punish characters with decent frame data who attack their shield. Their recovery is also limitedーthey can be edgeguarded somewhat easily, and they will be in big trouble if it runs out. Robin players need to zone their opponents out for the most part, and only move in when a good opportunity presents itself.

1. -2 = Disadvantage. -1 = Slight Disadvantage or Even. 0 = Even. +1 = Slight Advantage or Even. +2 = Advantage.
2. The matchup chart was based around both the opinions of professional players of each character, as well as our own experience through playing Robin.
3. Characters within each tier are unordered
4. Pokemon Trainer's individual Pokemon (Squirtle, Ivysaur, and Charizard) as well as Echo fighters with no significant difference than their regular counterpart are not shown.
5. For other characters who are not shown here, we are still investigating the matchup.

Robin's lack of good out of shield options could be considered one of their main weaknesses. Their up special is a somewhat quick out of shield tool, but it needs to be angled behind Robin in order to hit an opponent in front of them, and it will also leave them in helplessness and put them in disadvantage, making it a big committment. With an item (such as a tome or sword) in hand, they can throw forward in just 10 frames. Generally neutral air is the go-to out of shield option, although at 10 frames, it's not exactly the quickest OOS option out there.

About the Levin Sword and Tomes

Robin's dash attack has a quick startup and great range. It's mainly used as an approach tool or for catching your opponent's landings.

Robin's forward tilt has a quick startup. You can use it to turn around from a dash as a quick punish.

Robin's up tilt also has a quick startup. It work great as a quick anti-air attack.

Robin's down tilt has pretty quick startup and little endlag, but poor range, so in most cases, jab will be a better option.

Robin's forward smash has a powerful knockback. While the Levin Sword variant is extremely powerful, aerials using the Levin Sword are also very strong attacks that are easier to land, so this move typically doesn't see much use.

Robin's up smash similarly has a powerful knockback. Both the Levin and Bronze swords have a strong knockback in the upward direction, so use it to catch an opponent's landing, or punish their jump.

Robin's down smash has good knockback. Using the Levin sword will increase the knockback and range of the attack. When using the Levin Sword, the attack sends a low blast outward on both sides of Robin, which can be used to prevent opponents from grabbing the ledge.

Robin's Nair has pretty quick startup. It's mainly used as a poking tool due to its short landing lag. While it doesn't have a ton of knockback, it can KO at higher percents (especially when using the Levin Sword).

Robin's Bair has a quick startup, as well as great damage and knockback. While the hitbox is quite narrow, it's one of Robin's primary KO moves due to the strong knockback provided by the Levin sword.

Robin's down air with the Levin sword can meteor smash opponents While the range is somewhat narrow, it is a powerful hitbox, and great for spiking opponents who recover from under the stage with predictable recovery routes.

Robin uses his Thunder tome to cast Thunder magic. Robin's neutral special can be charged to increase damage, speed, and range. The charge can be cancelled by rolling left or right, shielding, jumping, or pressing the special button again to release it.

The uncharged neutral special is Thunder, which is its weakest but fastest attack, which makes it useful as a poking tool.

Charging to the first stage releases Elthunder. It's slower but stronger than Thunder, and allows you to build up damage from a decent range. Additionally, Elthunder can be used as a KO move if the opponent's at a high percentage, so try and hit offstage opponents with it.

Charging to the second stage releases Arcthunder. While slower than previous stages, it does powerful damage on shield. You can condition opponents to shield by using a smash attack with the Levin Sword, and then unleash a charged Arcthunder to break their shield and turn the tides of battle.

Fully charging the special releases Thoron. It has excellent speed, power, and range, and can also be used as a KO move. However, note that it has a very slow startup, so it is much easier for opponents to shield it than previous stages.

Robin's side special will shoot a fall of fire in front of them. When the fireball hits the opponent, it creates a fire pillar that momentarily burns the opponent. While the opponent is caught in the flame, Robin is free to follow up with another powerful attack, such as a Levin Sword aerial, or another arcfire. It functions somewhat similar to Ness's PK Fire.

Robin uses the Elwind tome to launch themself high into the air. Elwind has a hitbox on it, and the first hit can Meteor smash. Each shot consumes durability, so if you don't keep an eye on the tome's durability, you may only get one boost, or a very small boost if the tome is broken.

Robin uses dark magic to steal the opponent's health. This special functions as a command grab, so it can't be shielded, but the opponent can get out quickly by mashing. The amount of recovery increases when Robin's damage is higher than their opponent's. If there is no difference in damage, it recovers 9.6% when used from the front and 12% when used from behind an opponent.

Additionally, the down special can be used mid-air, so it can be utilized as an aerial mixup option.

Robin's forward throw shoves their opponent in front of them. It can't be used for combos, so use it when you want to get your opponent off the stage.

Robin's back throw puts their opponent behind them. It similarly can't be used for combos, but at high percents it can be used as a KO move when standing by the ledge.

Robin jabs their opponent upward with the hilt of their sword. It also can't be used for combos, so it is best used on opponents with poor disadvantage stage.

Robin jabs their opponent downward with the hilt of their sword. It can be comboed into a neutral air or up air to rack up damage.

How to Unlock Robin

There are three ways to unlock Robin. Completing any of these, then defeating Robin when they appear in the “a New Challenger Appears” screen will allow you to use them afterward. 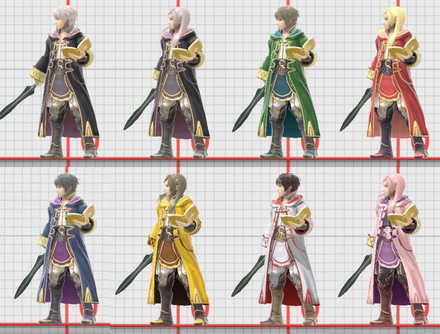 In order for us to make the best articles possible, share your corrections, opinions, and thoughts about 「Robin Guide: Matchup Chart and Combos | Super Smash Bros Ultimate」 with us!