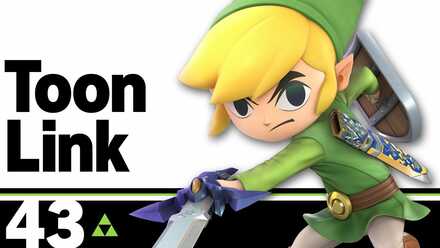 This is a guide to using Toon Link in Super Smash Bros. Ultimate. Toon Link's bread and butter combos, how to unlock, frame data, alt costumes and skins, as well as Toon Link's matchups, counters, and tier list placement can all be found here.

Smash Ultimate Toon Link is very fast, and like the other Links, has a wide variety of projectiles in his kit. Even moreso than the other Links perhaps, he is best played defensively, using his many projectiles to keep enemies away and force them to approach. Toon Link can combo into Fair or Bair from his projectiles for consistent kill setups, and he also has powerful smashes and a kill throw (back throw) to help him clean house.

He is very floaty compared to the other Links, and this low air speed means he has a rather poor disadvantage state, and gets juggled rather easily. Also, similar to Young Link, he is rather light, so he is prone to dying a bit earlier (though he is heavier than Young Link).

1. -2 = Disadvantage. -1 = Slight Disadvantage or Even. 0 = Even. +1 = Slight Advantage or Even. +2 = Advantage.
2. The matchup chart was based around both the opinions of professional players of each character, as well as our own experience through playing Toon Link.
3. Characters within each tier are unordered
4. Pokemon Trainer's individual Pokemon (Squirtle, Ivysaur, and Charizard) as well as Echo fighters with no significant difference than their regular counterpart are not shown.
5. For other characters who are not shown here, we are still investigating the matchup.

Toon Link's go-to out of shield option is up special, since it comes out in just 6 frames, attacks on both sides of Toon Link, and has good KO potential (especially if done while facing ledge). It is somewhat committal though, and will likely get you punish if whiffed, so be careful not to get baited into using it. If you have a bomb in hand when shielding, you can throw it out out shield in just 8 frames (10 if throw backward), which is another good option that can lead to a follow up. Lastly, if you are attacked from above, you should instead use up smash, which takes 11 frames.

Toon Link's jab has decent startup and moderate range, so it's a good move to use for covering your landing. It doesn't have a rapid jab, but landing the third hit can set up a jab lock. If you hit an opponent's shield with it, only hit once or twice before running away and then coming back in for a mixup, such as a grab, etc.

Toon Link's dash attack is very quick and has little endlag. It is mostly used for catching landings, or as a quick burst option for whiff punishes. It is -13 on shield, so depending on the opponent, it is somewhat safe, but it lacks KO power.

Toon Link's forward tilt is pretty quick, and has good range which actually covers the area slightly above and behind Toon Link to his front side. It can also be used to 2-frame opponents trying to recover.

Up tilt is a quick attack with very little endlag, and is a great combo starter. At low percents, it can combo into itself, as well as neutral air, and sometimes, up air.

Toon Link's down tilt comes out quickly, and can trip opponents, or allow for a jab lock. It doesn't combo into aerials like the other Links' down tilt does, but it is still very safe on shield when spaced properly (-6).

Toon Link's forward smash has been changed from the other Links, and only delivers a single powerful strike. Using it causes Toon Link to move slightly forward, making it have a slightly bigger hitbox than it appears to. It is a good mixup to use out of a dash when turned around on an opponent.

Toon Link's forward smash is pretty quick, and strikes the 180 degree area behind and in front of him. It is a good anti aerial or out of shield punish for opponents who attack your shield from above, and can sometimes be comboed into from bombs.

Down smash is Toon Link's quickest smash attack, but the weakest of all three. It is mostly used when reading an opponent's roll from ledge, or behind your shield.

Neutral air is tied with back air for Toon Link's quickest aerial. It is a good move for quickly striking an opponent in the air, can be comboed into from a variety of moves, and can nullify weak projectiles. It also works as a combo starter. It is -3/-4 on shield, making it very safe if spaced correctly.

Forward air is Toon Link's go-to KO tool, thanks to its excellent horizontal knockback and power. It is a combo finisher, and can be comboed into from both bombs or boomerangs. Rack up an opponents damage with Toon Link's specials and put them in the air to finish them off with a forward air. If spaced properly, it is -6 on shield.

Toon Link's back air is quick, with little endlag, making it great for comboing into another back air, or an up air, which is also a KO confirm. It is not strong enough to KO, but it is safe on shield (-4), making it a great tool for pressuring shield and comboing.

Toon Link's up air is another good tool for both racking up damage and KOing opponents. Its long lasting hitbox is very good for juggling opponents, but note that the initial 3 frames it is active are much more powerful than the late hitbox. It can sometimes be comboed into from an up tilt, up throw, etc.

Toon Link's down air will come straight down to the ground, and is very powerful if it connects. During the startup, it has a meteor hitbox and can spike opponents, but using it offstage is unsafe unless done with a bomb in hand (via Z-dropping and regrapping with down air), since Toon Link cannot cancel. If used right at the ledge of the stage, it is possible to spike an opponent, but be careful not to jump too far forward and SD.

The move is good as an occasional mixup, but since it is predictable and easily punished, you should not use it very often.

Toon Link's neutral B lets him fire arrows, and holding the special button longer before releasing it will cause the arrow to go further and deal more damage. The arrows are much slower than the other Links', and unlike Young Link, they do not combo, but the move has little endlag, and combined with Toon Link's speed, they help him to zone more effectively. They can be combined with a B-reverse in the air or after leaving a platform as an approach tool.

Toon Link's side special throws out a boomerang which will go forward and come back to Toon Link. You can use up or down on the control stick to angle the weapon, which is great for hitting opponents in different positions. Doing a smash input with the move will cause it to travel further and deal more damage, so being able to throw at different angles and ranges is essential to the character.

Since arrows only go straight forward, the boomerang is good for covering the areas diagonal from Toon Link, and is mostly used to keep opponents from getting in, since Toon Link can struggle up close. When you hit an opponent up close with the move, it will send an opponent upward, which can then combo into a short hopped or full hopped forward air, which is one of Toon Link's main kill confirms.

When Toon Link catches the boomerang, he will briefly pause, but this animation can be cancelled if you are doing another move when it reaches him, or if you jump over it.

Toon Link's up special comes out very fast, making it a great out of shield option. It will hit on both sides of Toon Link, and send the opponent in the direction Toon Link was facing. It can KO from about 120~ if used on the ground and near the ledge. It can also be charged on the ground before releasing to deal more damage, although there are not usually any good situations to do so.

It is also very powerful when used in the air, and can be comboed into from boomerang, back air, etc. Lastly, it is one of Toon Link's recovery options, along with hs tether recovery (Z-Air).

Toon Link's down special pulls out a bomb which will detonate when it hits something, or after enough time passes. It is very good for comboing, and can be followed up with forward air as a KO confirm. The detonator is much longer than the one on Young Link's bombs, making it harder to do a bomb recovery, unless the bomb was pulled before getting hit off stage. Bombs can be thrown out of shield, so hold onto one and use it along with Toon Link's other projectiles to zone out opponents.

Toon Link's grab uses the hookshot, making it a tether grab with slow startup but good range, so it is normally used on the ground as a hard read as opposed to an out of shield option.

When used in the air, Toon Link's hookshot functions as an attack and recovery option. If close enough to the ledge, it will lock on to the ledge and pull Toon Link in after pressing A, so if you play the character, it's a good idea to go into training mode and test the range.

On the stage, zair can be used as a poking tool, as it has good range and is very safe on shield (-3). If it hits the opponent, it can be comboed into a grab, as well as a few other moves depending on percent. At later percents it can be used to set up a jab lock.

Toon Link's forward throw is used for stage control, or putting an opponent off stage. It does not KO or combo into anything.

Toon Link's back throw doesn't combo, but it is powerful enough to KO when used near the ledge on opponents at around 140%.

At most percents, up throw is the go-to throw for Toon Link, since it can be chained into an up air (not a true combo, but very often works, depending on DI). It doesn't KO until very high percents, so once an opponent has reached ~130%, go for back throw instread.

Toon Link's down throw sends an opponent behind him. Due to it sending opponents slightly too far, it doesn't combo reliably in most cases, but depending on the character, it may combo into back air at very low percents. In most cases, it is better to use up throw instead.

How to Unlock Toon Link

There are three ways to unlock Toon Link. Completing any of these, then defeating Toon Link when they appear in the “a New Challenger Appears” screen will allow you to use them afterward. 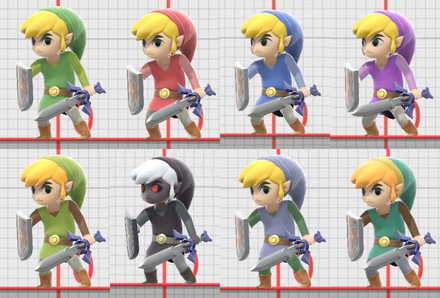 In order for us to make the best articles possible, share your corrections, opinions, and thoughts about 「Toon Link Guide: Matchup Chart and Combos | Super Smash Bros Ultimate」 with us!