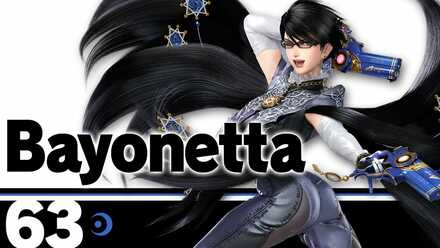 This is a guide to using Bayonetta in Super Smash Bros. Ultimate. Bayonetta's bread and butter combos, how to unlock, frame data, alt costumes and skins, as well as Bayonetta's matchups, counters, and tier list placement can all be found here.

A fighter with powerful aerial combos

Smash Ultimate Bayonetta is a character that can use her very powerful combos to lift opponents up in the air and rack up damage. Her entire gameplan revolves around them, since they are the only way for her to reliably damage and KO her opponents. She excels in edgeguarding and offstage play as well, with neutral B killing opponents close to the blast zones.

Bayonetta has been nerfed considerably from her Smash 4 counterpart, with her KO power and hitbox sizes severely reduced. In Smash Ultimate, Bayonetta can only fair well if she is able to land her confirms, so Bayonetta mains will need to devote time to learning them in training. Bayonetta is severely held back by her lack of good approach tools, as most of her grounded moves are unsafe on shield and punishable. She struggles to kill, so opponents with good OOS options and endurance that can play patiently and defensive may give her a hard time.

1. -2 = Disadvantage. -1 = Slight Disadvantage or Even. 0 = Even. +1 = Slight Advantage or Even. +2 = Advantage.
2. The matchup chart was based around both the opinions of professional players of each character, as well as our own experience through playing Bayonetta.
3. Characters within each tier are unordered
4. Pokemon Trainer's individual Pokemon (Squirtle, Ivysaur, and Charizard) as well as Echo fighters with no significant difference than their regular counterpart are not shown.
5. For other characters who are not shown here, we are still investigating the matchup.

After catching your opponent in Bayonetta's up special, you have a wide range of options. Out of those options, here is our list of the combos that kill and also deal the most damage.

Bullet Arts is a unique ability that Bayonetta has on her attacks where bullets will be fired when holding the button throughout the attack. This works with her grounded attacks, aerials, as well as most specials (meaning you'll hold either A or B depending on the type of attack). The bullets fired from these attacks also are not counted as projectiles, meaning that they cannot be reflected.

Bayonetta has average out of shield game, with a pretty fast option in her up special, which can also be used to start a combo and rack up damage. The only down side to this move is its short range, which won't hit opponents unless they are above or right in front of Bayonetta, making it hard to use against spaced attacks. Bayonetta can also jump out of shield and immediately use her aerial side special, which is also capable of stringing together combos for great damage, though 10 frames is not particularly quick, so most opponents will be able to shield in time to avoid it if their initial attack was safely spaced.

Bayonetta's jab is a quick series of hits. Its slow startup makes it not the best get-off-me tool, so avoid going for it as Bayonetta is better at fighting from a mid-range.

Bayonetta's dash attack is a lunging attack that can be held to make Bayo fire her guns. It can't be used for combos, but it doesn't pose too much of a risk, as the dash can go through enemy shields to avoid out of shield punishes. It can also kill at high percents, so try to catch enemies off guard with it.

Bayonetta's forward tilt is a three-hit combo that can launch enemies in the air. It's quite slow, and it has too much end lag to combo into anything, so side special is a much better approach tool.

Bayonetta's up air is a quick attack that sends enemies directly above her. It can easily be followed up by an Up Air or an Up Special for further combos, so use this move to lift up opponents at close range.

Bayonetta's down tilt is a good poking tool that can send enemies upwards. It can be connected with a powerful combo to rack up damage or get a KO. Use up tilt to hit opponents approaching with a jump, and down tilt to hit grounded opponents to start combos.

Forward smash is Bayonetta's strongest smash attack. It can be angled upwards or downwards to slightly adjust the hit zone, but its slow startup and endlag make it easy to punish if just thrown out on its own, but it can be comboed into from the first hit of forward air at high percents.

Bayonetta's up smash is another strong smash attack that can kill enemies at around 110%. It is mostly used to punish an opponent while they are frozen in witch time, Bayonetta's down special.

Bayonetta's down smash attack has high damage and can meteor smash. It can be used to spike enemies that are hanging on the ledge after their invulnerability has run out, or to spike an opponent trying to recover low. On the stage it doesn't KO until much higher percents than her other smash attacks, so it should mostly be used for edgeguards.

Bayonetta's neutral air is a quick move that can be held to make use of Bayonetta's bullet arts. It can be used to damage enemies from afar or edgeguard, and it can also be used as a safe landing option.

Bayonetta's forward air has three different hits when inputted successively, and is one of Bayonetta's essential tools to her aerial combos Its knockback isn't that great, but the first two hits can also be chained without the 3rd hit to try and carry enemies offstage and finish them off with her side special and other moves.

Bayonetta's back air has somewhat slow startup, but it is powerful enough to KO opponents at higher percents. Just make sure to land the attack's sweet spot (Bayonetta's foot) to maximize its effects! Its range and low endlag make it a safe move to use on shield, and is one of her less risky options for closing out a stock.

Bayonetta's up air is one of her main combo moves, being useful as both a combo extender and a combo finisher. It's a quick circular aerial attack that can be held to fire in all directions while spinning. Holding the attack button after using the attack to trigger her bullet arts is a great way to edgeguard offstage opponents, since Bayonetta will easily be able to recover.

Down air is a dive attack with a meteor hitbox at the tip. It's dangerous to use offstage since it can lead to an SD, so only go for offstage spikes with this move if you are confident in using Bayo's recovery.

Bayonetta's Neutral special allows her to fire bullets from the guns on her hands and feet. You can charge the move by holding the special button down, and you can also repeatedly tap the button to unleash more bullets. The bullet's range, damage, and knockback increase if it's fully charged so you can use it to net off-stage kills after knocking an opponent off the stage with dash attack or forward smash.

In the air, it's a move that can be used once, and then again when it hits the enemy. Both hits count towards the normal aerial side special and the downward side special (executed using ↓↘→ + B). Chain this move together with her up special and aerials to rack up damage. At high percents, the double After Burner Kick and forward aerial can KO.

The downward side special (↓↘→ + B) lets her kick toward the ground, which can also combo, but it has a lot of end lag if whiffed.

Bayonetta's up special is a part of her bread and butter combos that she can use against opponents. It can be used once in the air and can be reset after jumping, which means you can use it a maximum of two times during an aerial combo.

It's also a good out of shield option because it's also one of her main combo starters and can thus, rack up damage. In addition to this, you can even cancel your 2nd jump by inputting the second up special by quickly using it before Bayonetta's double jump wings come out. Just beware that each time you use up special or side special, her landing lag is increased, leaving her very vulnerable when coming back to the ground.

Down Special is Bayonetta's counter move. Upon getting hit during the move's active hitbox, it will slow down the enemy greatly, which makes them vulnerable to combos and/or smash attacks. The duration of time slow gets longer the more damage your opponent has taken, and it gets shorter the more you use the move. It can be used to counter projectiles, though you will get much more use out of it when using it at close range.

Bayonetta's forward throw knocks the enemy forward. It cannot be used for combos so only use it to throw enemies offstage. At very high percents, it can KO when used near the ledge.

Similar to her forward throw, Bayonetta's back throw can't be used for combos so only use it to knock enemies offstage.

Bayonetta's up throw deals low damage and it can't be used for combos, but it can be used to put opponents with poor disadvantage states into the air to try and juggle them.

Bayonetta's down throw can be comboed into her forward air. This is the most ideal throw to use at lower percents for racking up damage.

How to Unlock Bayonetta

There are three ways to unlock Bayonetta. Completing any of these, then defeating Bayonetta when they appear in the “a New Challenger Appears” screen will allow you to use them afterward. 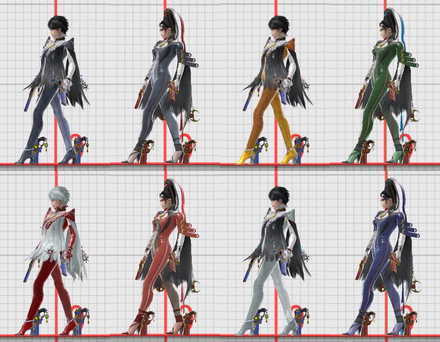 In order for us to make the best articles possible, share your corrections, opinions, and thoughts about 「Bayonetta Guide: Matchup Chart and Combos | Super Smash Bros Ultimate」 with us!