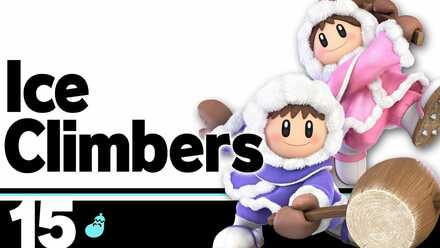 This is a guide to Ice Climbers in Super Smash Bros. Ultimate. Everything about Ice Climbers, including bread and butter combos, how to unlock, how to descync, alt costumes and skins, as well as Ice Climbers matchups and counters can be found here.

Ice Climbers in Smash Ultimate have the unique property of being two characters that function as one. When they are together, they will do whatever moves you input, and when separated, Nana will be controlled by the CPU until the pair reunites. While they no longer can wobble or chain grab opponents like in previous games, they still have deadly combo potential, and can deal massive damage when attacking simultaneously.

Ice Climbers are a high execution character, with lots of potential if enough practice is put in, including learning how to desync them (shown below). While together, they are a rather powerful duo, but if Nana (the AI controlled partner) is KO'ed, then Popo will be alone and severly limited in his gameplan. When alone, Ice Climbers' recovery, damage output, and KO power are all significantly reduced, so it's vital to make sure your opponent does not take out your partner.

How to Make Ice Climbers Desync

Ice Climbers can be desynced with down throw. The second the opponent is thrown to the ground, if you perform another move, you will desync.

Ice Climbers can be desynced with an up air. If up air is quickly performed 2 times in a row, you will desync.

Ice Climbers can be desynced by dash canceling. While dashing, flick the stick backwards in the opposite direction and perform a tilt attack to desync.

Ice Climbers can be desynced via the ledge. When Ice Climbers fall from the ledge, dodging towards the stage will cause them to desync.

1. -2 = Disadvantage. -1 = Slight Disadvantage or Even. 0 = Even. +1 = Slight Advantage or Even. +2 = Advantage.
2. The matchup chart was based around both the opinions of professional players of each character, as well as our own experience through playing Ice Climbers.
3. Characters within each tier are unordered
4. Pokemon Trainer's individual Pokemon (Squirtle, Ivysaur, and Charizard) as well as Echo fighters with no significant difference than their regular counterpart are not shown.
5. For other characters who are not shown here, we are still investigating the matchup.

This combo works at various percents. This is an easy combo that can do around 30% in damage.

This combo works on opponents at low percents. This is an easy combo that can do around 30% in damage.

This combo works on opponents at low percents. Immediately after the down throw, input the down smash.

A combo for opponents at low percents. It involves desyncing by using a forward roll right after down throw. This is a rather tough one to pull off, so be sure and practice in training mode.

Another low percent combo. This one involves desyncing by using down special right after a down throw. If your opponent is unable to SDI out of it, this combo can deal a ton of damage.

Ice Climbers don't have any extremely quick out of shield options, with their fastest one (nair) coming out in 9 frames. It won't be able to punish everything, so exert caution when using it on safely spaced moves. For opponents attacking from above, up smash is a decent option. When possible, shield grabbing is the best punish for unsafe moves, as Ice Climbers can convert a lot off of a single grab.

A two part attack where both climbers swing their hammer forward. At 4 frames of startup, it's a decent get-off-me tool.

Forward tilt sends an opponent away, and can be used to keep opponents from getting in too close. At higher percents, it has good knockback, and can even KO.

Ice Climbers' up tilt sends opponents upward, which can combo into up air, etc.

Ice Climbers' down tilt has similar range to forward tilt, but deals less damage. It is good for poking an opponent from a distance since it comes out so quick, and can even edgeguard an offstage opponent in some scenarios.

Ice Climbers' forward smash deals great damage and knockback, and if both climbers' attacks connect, it can KO very early.

Ice Climbers' up smash is another powerful move, which will send opponents upward. After freezing an opponent with blizzard (down B), you can follow up with an up smash, which will KO in some cases.

If both Ice Climbers are alive, they will both attack in different directions. Like most down smashes, it comes out fairly quick, and can be used to cover rolls.

Neutral Air is the Ice Climbers' fastest aerial. The entire area around their body becomes a hitbox, so it is a good get-off-me tool up close, and can also be used to edgeguard. While it doesn't have the best range, it is -4 on shield, making it a good poking tool.

Ice Climbers' forward air has a meteor hitbox on it, so it can be used offstage for spikes. It has somewhat slow startup, but pretty low endlag for a spike, so it is a good move to aim for an early offstage KO with. The move is -5 on shield, making it relatively safe when spaced.

Ice Climbers' back air is very safe on shield (-3), and has decent range, making it a good tool for pressuring shields. It can also be used to desync.

Ice Climbers' up air comes out quick and has very little endlag. An excellent juggling tool, use this move to rack up damage on opponents in disadvantage.

Ice Climbers' down air has a lingering and powerful hitbox which can be used to strike opponents from above. It is very unsafe on shield (-16), so be careful not to whiff it, or you may be punished.

Ice Climbers' neutral special is a move that shoots ice straight forward (one for each Ice Climber). It is mainly used for poking from a distance and racking up damage. It can be used to edgeguard opponents offstage. Hitting an opponent up close with it at high percents will freeze them, allowing for a follow up.

Ice Climbers' side special causes them to spin around while attacking, and can be moved left or right, and also lifted by mashing the special button. The distance that they move is decreased when only one Ice Climber is present, and it will have noticeable endlag, so be careful not to whiff it. In general, its fast startup makes it a good approach tool for the Ice Climbers.

Up special is primarily used for recovering. It allows them to recover a great distance when both climbers are present, but it becomes very poor when only one uses it. If the partner hits an opponent during the jump, it deals heavy knockback, and can even KO.

Down Special will freeze opponents, which can lead to a follow-up. If you are able to make use of desyncing, this move can rack up a ton of damage on an opponent.

Ice Climbers' forward throw is used for stage control, and putting opponents offstage. It does not KO or combo into anything.

Ice Climbers' back throw is also used for stage control, and putting opponents offstage. Like forward throw, it does not KO or combo into anything.

Up throw will put opponents into the air. Against characters with poor disadvantage, ths can allow you to go after them and juggle with an up air.

Down throw is the Ice Climbers' primary throw, as it is useful as a combo starter. When used together with desyncing, it can allow you to rack up lots of percent on an opponent.

How to Unlock Ice Climbers

There are three ways to unlock Ice Climbers. Completing any of these, then defeating Ice Climbers when they appear in the “a New Challenger Appears” screen will allow you to use them afterward.

Register as a member and get all the information you want. (It's free!)
Login
Opinions about an article or post go here.
Opinions about an article or post
We at Game8 thank you for your support.
In order for us to make the best articles possible, share your corrections, opinions, and thoughts about "Ice Climbers Guide: Matchup Chart and Combos | How to Make Ice Climbers Desync" with us!
When reporting a problem, please be as specific as possible in providing details such as what conditions the problem occurred under and what kind of effects it had.