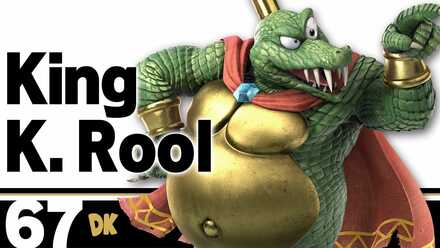 This is a guide to using King K. Rool in Super Smash Bros. Ultimate. King K. Rool's bread and butter combos, how to unlock, frame data, alt costumes and skins, as well as King K. Rool's matchups, counters, and tier list placement can all be found here.

King K. Rool in Smash Ultimate is a heayweight character with access to several projectiles and a good recovery, in addition to powerful smash attacks. His belly has super armor, meaning that he will receive no knockback when moves hit it, allowing him to tank opponents' attacks and beat them out with a move of his own. His endurance is some of the best in the game, and he also has pretty good grab game, which allows him to bury opponents for a powerful follow-up.

As a big body heavyweight, K. Rool shares many of the typical heavyweight weaknesses. His moves have lots of endlag, leaving him punishable if he whiffs them. Additionally, his huge body frame makes him a target for projectiles, and he is combo fodder. He also has slow movement overall, and thus will struggle with characters who can break his zoning and fight up close.

1. -2 = Disadvantage. -1 = Slight Disadvantage or Even. 0 = Even. +1 = Slight Advantage or Even. +2 = Advantage.
2. The matchup chart was based around both the opinions of professional players of each character, as well as our own experience through playing King K. Rool.
3. Characters within each tier are unordered
4. Pokemon Trainer's individual Pokemon (Squirtle, Ivysaur, and Charizard) as well as Echo fighters with no significant difference than their regular counterpart are not shown.
5. For other characters who are not shown here, we are still investigating the matchup.

King K. Rool's out of shield game is somewhat poor, since he has few quick moves that can punish opponents' shield pressure. His up smash comes out very fast (frame 6), although it will only hit opponents above him in its initial hitbox, and the hitbox that hits in front of him doesn't come out until frame 19, giving opponents plenty of time to dodge and punish it. Neutral air is probably his best option, since it comes out on frame 10, and will give him armor on his belly from frame 9. His grab doesn't come out until frame 12, but it does have great range, and can lead into many follow-ups, making it the best option given the opponent attacks up close with an unsafe move.

Jab is K.Rool's fastest move. Use it for quick damage or as a get-off-me tool when an opponent breaks through K Rool's zoning. 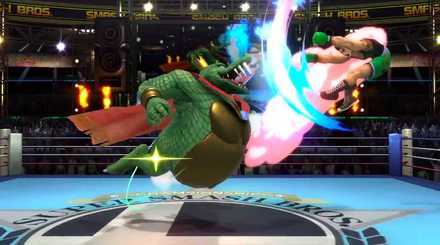 King K.Rool's dash attack has quick startup, and is a great tool for knocking enemies away. It's easy to hit as the hitbox is incredibly large, and it grants K Rool's belly armor. Beware the move's long endlag, which makes it very punishable if whiffed.

King K. Rool's forward tilt is an attack with high damage and knockback power. It has slow startup, but K.Rool's stomach gains armor, which allows him to win trades with other opponents' attacks. Additionally, the attack's tip has stronger damage and launch power, so by spacing it properly, you can get easy kills without relying on smash attacks.

King K. Rool's up tilt is a fast attack, but its forward hitbox is quite short. It has good vertical range, so it can hit opponents in the air, or on opponents standing on platforms. K Rool's arm also gains invulnerability during the move, so it's a great anti-air tool for opponents jumping forward or trying to approach with an aerial. 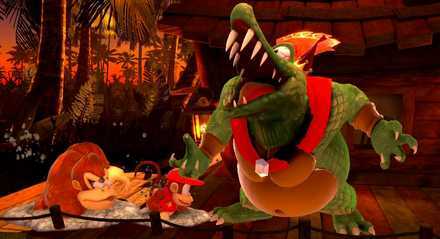 King K. Rool's down tilt is an attack that can deal high damage to aerial units or bury grounded units that are hit. Its wide range can make it hit easily, but it has rather slow startup and endlag, so avoid spamming it. At high percents, it's a great kill option as the bury effect can be followed up with a quick smash attack or even a sweet spot FTilt. It can hit underneath the ledge, allowing it to work as an edgeguarding tool. 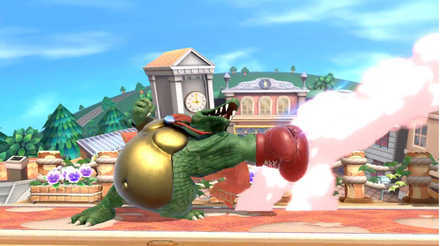 King K.Rool's forward smash is a powerful horizontal attack and has good damage and strong knockback power. Be aware that the damage is lessened if the glove part of the move doesn't hit. Its angle can also be adjusted to hit enemies above or beneath its regular hitbox so aim it accordingly.

King K.Rool's Up Smash is an attack that has a long duration and multiple hitboxes. The initial hit will only hit enemies above him and it launches them vertically, while the downward swing and slam attack will send enemies forward. It is a decent out of shield option, but only for opponents that are above K Rool, as the forard hitbox comes out much later.

King K.Rool's down smash makes him leap a short distance then slam the ground, which sends enemies flying as its knockback power is quite strong. Use it as a counter move when enemies roll, spotdodge, or try to hit up close with a down tilt. K Rool's belly has armor during the move, allowing him to tank attacks and win the trade. Like his other smashes, it has long end lag, so beware of getting punished for whiffing it. 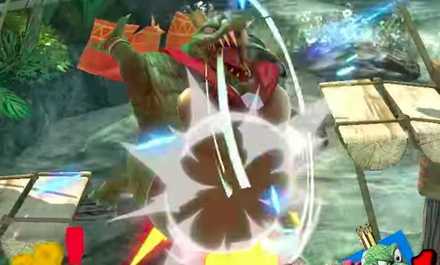 King K.Rool's neutral air is a fast move with a wide hitbox, which also gives him armo on his belly. Use it to approach and opponent or fight at close range. It is a good move to throw out when landing, since it is safe on shield (-4/-5), and can also be used as an out of shield option. 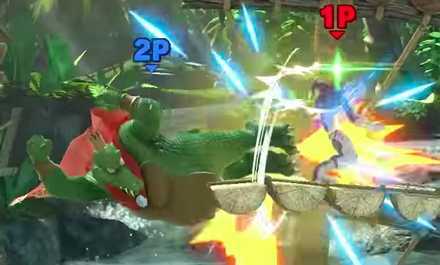 King K.Rool's Fair's range is quite large and its damage isn't anything to scoff at either. Its long range can be used to pressure shielded opponents, since it is very safe when spaced correctly, and is a good approach tool as well. If spaced correctly, it can also be used to KO reliably around 100%. 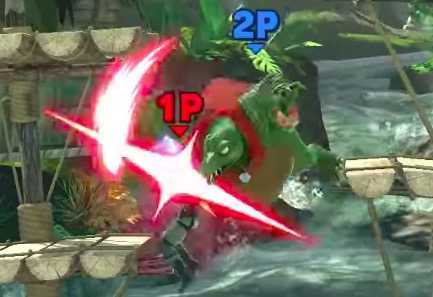 King K.Rool's back air is a slow downward punch that can meteor smash when timed properly. Use it against enemies offstage to aim for an early KO.

King K.Rool's Up Air is a quick move that can deal decent damage. Use it to juggle enemies above you, as it can KO, but be wary as its hitbox is quite small, and only hits directly above K Rool.

Similar to his back air, King K.Rool's down air has a meteor hitbox as well. Its attack aims downwards so use back air to spike enemies that recovery horizontally, down air to spike opponents who recover low. 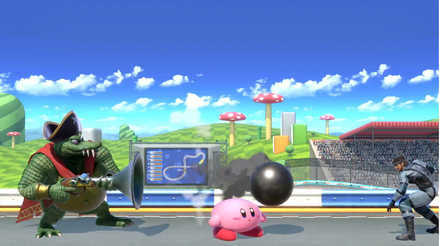 King K.Rool's cannon Blunderbuss can launch a cannon ball. After launching it, the special button can be held to suck opponents in (it functions as a command grab, so it will work on shielded opponents) and the cannon itself, which will be re-fired diagonally. You can launch the enemies that were caught in front, backward, or vertically.

When used on a platform, K Rool can hold down to drop through and use the vacuum effect from the ground. The vacuum is also a great ledge guarding tool, as it can cover several options at one time, allowing K Rool to prevent the opponent from getting back to the stage. 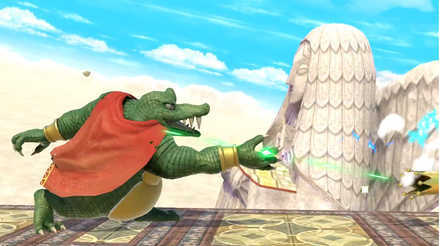 King K.Rool throws his crown horizontally. After a few seconds, it will return to him, dealing damage on its way back as well. During the move's throw, K Rool has super armor, so he will tank an opponent's attempt to approach with an attack (other than grab). This is one of K Rools most useful neutral tools, and should be used at any opportunity to zone out opponents and rack up damage.

Failing to catch the crown will make it drop on the ground, which can be picked up by enemies as an item. If it is picked up and thrown off the stage, it will respawn on K Rool's head after some time has passed. 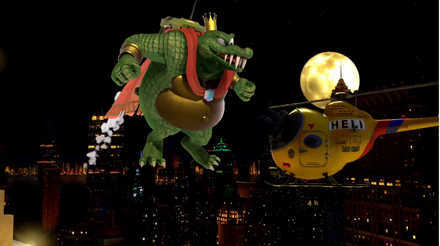 Propellerpack is King K.Rool's main recovery tool. While it moves slow, it can cover a lot of distance, which allows King K.Rool to go offstage and attack enemies and easily make it back. It has a hitbox above K Rool, but he is still vulnerable to side attacks so it should normally only be used to recover low. 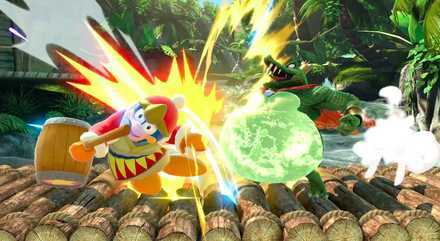 King K.Rool's down special is Gut Check. It's a counterattack that damages enemies when it gets triggered. Unlike other counters, he will only use his stomach to attack so its hitbox won't reach enemies above him or beneath him. However, it can be redirected backward, so if your enemy uses a dash attack that passes through, you can still hit them with it.

King K.Rools forward throw can be used to throw enemies offstage. Use it if no other moves can be comboed with his down throw, or if you want to keep the enemy offstage for an edgeguard. 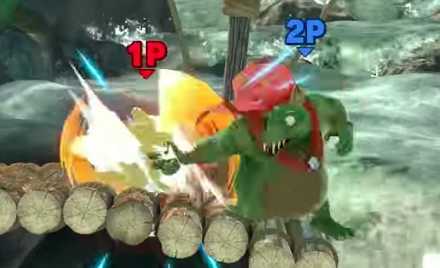 K.Rool's back throw is quite powerful. If the enemy's percent is around 130%, you can net KOs with it if you're near the ledge. 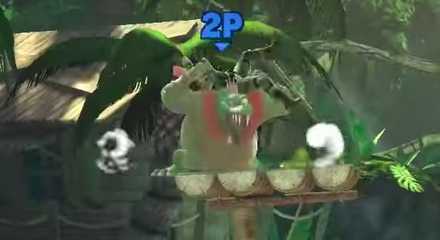 King K.Rool's upthrow deals the most damage out of all his throws. It also sends them straight upward. If you can't chain combos with his down throw, up throw is the most ideal one to use for racking damage.

King K.Rool's down throw will bury opponents. At low percents, enemies will be able to escape quickly, so it's best to use other throws at low percents. At high percents, however, landing a quick smash attack or forward tilt after using his down throw can ensure an easy KO, so go for this option after racking up enough damage. 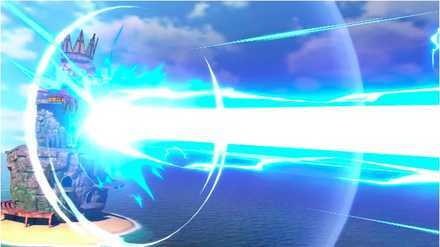 How to Unlock King K. Rool

There are three ways to unlock King K. Rool. Completing any of these, then defeating King K. Rool when they appear in the “a New Challenger Appears” screen will allow you to use them afterward. 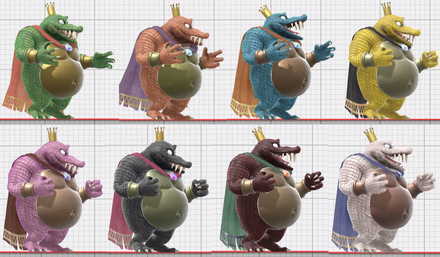 In order for us to make the best articles possible, share your corrections, opinions, and thoughts about 「King K. Rool Guide: Matchup Chart and Combos | Super Smash Bros Ultimate」 with us!