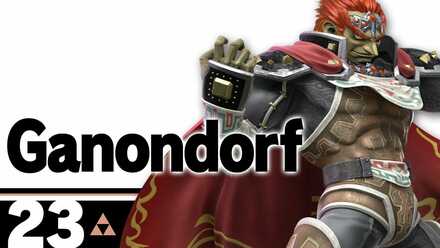 This is a guide to using Ganondorf in Super Smash Bros. Ultimate. Ganondorf's bread and butter combos, how to unlock, frame data, alt costumes and skins, as well as Ganondorf's matchups, counters, and tier list placement can all be found here.

As the wielder of the Triforce of Power, Smash Ultimate Ganondorf demonstrates extremely high power and knockback in each of his attacks. Ganondorf can use his neutral aerial (with its low end lag), down tilt (which has decent range), and grabs / side special to damage opponents, ultimately finishing off stocks with powerful moves like forward aerial and any of his smash attacks.

While Ganondorf has access to some very powerful moves in his kit, his recovery is very poor, and being a heavyweight makes him extremely susceptible to getting comboed, so he struggles a lot against fast characters with good frame data and access to projectiles.

1. -2 = Disadvantage. -1 = Slight Disadvantage or Even. 0 = Even. +1 = Slight Advantage or Even. +2 = Advantage.
2. The matchup chart was based around both the opinions of professional players of each character, as well as our own experience through playing Ganondorf.
3. Characters within each tier are unordered
4. Pokemon Trainer's individual Pokemon (Squirtle, Ivysaur, and Charizard) as well as Echo fighters with no significant difference than their regular counterpart are not shown.
5. For other characters who are not shown here, we are still investigating the matchup.

Poor out of shield options is one of Ganondorf's big weaknesses, being unable to have a good punish for safe attacks on his shield. His quickest option is 10 frames, but it is not going to be quick enough to counter properly spaced moves. For moves that were unsafe on shield, neutral air, shield grab, or if it was very unsafe, up special will be your go-to options, although in most cases, you'll simply have to attempt to reset neutral.

Ganondorf's jab is a single hit move that deals good damage and knockback. It has quick startup for one of Ganondorf's moves, so it can be used catch opponent landings, or as a somewhat decent get-off-me tool.

Ganondorf's dash attack has a very long lasting hitbox, which makes it one of Ganonforf's main approach tools. It can cross up shields if timed correctly, but when it does not, it is easily punished.

It can combo into aerials like neutral air, and can be used react to an opponent's tech after flame choke. At higher percents, it is also a KO tool.

Ganondorf's up tilt has a very long startup, but will pull in nearby opponents and deal massive damage if it lands. It can also break a full shield, which will allow for a powerful punish. Generally speaking, the moves massive startup and endlag make it not worth using at all, unless you feel extremely confident in your read.

Ganondorf's down tilt has good range, even better than forward tilt. The move is mainly used as a follow up to side B, for opponents who miss the tech.

Ganondorf's forward smash has an enormous hitbox and deals insane knockback. It has slow startup, and long endlag which can leave Ganondorf open to a punish. Try to get a read on your opponent's landing or movement and use this move to score an early KO.

Ganondorf's up smash is also very powerful, and hits above him in a 180 degree angle. It can be used to cover a ledge jump, an opponent jumping to a platform, as well as a roll. While slightly faster than forward smash, it still leaves Ganondorf open to a punish.

Down Smash is Ganondorf's quickest smash attack, and will hit on both sides of him, with the first hit comboing into the second one. It is an effective follow up to side special for opponents who tech behind Ganondorf.

Ganondorf's neutral air is pretty quick and has good range, making it a very important part of his kit. It is even pretty safe on shield, so in can be used for shield pressure, as a combo tool, and for edgeguarding.

Ganondorf's forward air is very powerful at sending opponents horizontally. Its hitbox gets slightly extended with a fast fall. Using it to hit an opponent offstage will generally lead to a KO.

Ganondorf's back air is quick, and has very little lag. It is -4/-4 on shield, making it a great tool for pressuring shields. At higher percents, it can also be used to KO opponents.

Ganondorf's up air is a quick attack that covers the area above his head, making it useful for juggling, and some moves will combo into it.

Ganondorf's down air has a meteor hitbox on his feet, as well as a normal hitbox up to his chest, making it a great edgeguarding tool for spiking an opponent and getting an early KO.

Ganondorf's neutral B is perhaps the most powerful move in the game, and becomes even more powerful when used in the air and reversed during its startup. It provides super armor so that Ganondorf will not flinch no matter what move hits him, and if landed, will usually KO an opponent or break a shield. It has extremely long startup and endlag, so it is not super useful, except for as a hard read, where Ganondorf can tank a laggy move and punish with this extremely high damaging move.

In most cases though, you will want to avoid using it.

Ganondorf's side special is a command grab that will dash forward and grab an opponent, before slamming them to the ground. It can be followed up with down tilt, down smash, or dash attack, depending on whether the opponent misses the tech, techs in, or techs away.

If used in the air, Ganondorf will also lift the opponent before slamming them down. If used from the ledge or offstage, Ganondorf will drag the opponent with him to the blast zone, resulting in a suicidal KO. If this is done, Ganondorf always loses his stock first, so it should only be used when you have a stock lead on your opponent, or when it is a good trade (ie: Ganondorf is at KO percent and the opponent has very low %).

Another command grab, Ganondorf jumps upward and grabs onto an opponent, before blasting off, which will allow him to use it again. It is primarily used for recovery, but can also be used as a KO option.

Ganondorf's down special allows him to kick forward quickly and deal heavy damage to an opponent. If used in the air, he will come down quickly to the ground, so it is one way of getting out of disadvantage. While it is somewhat quick in startup, it has noticeably long endlag, so it is easy to punish.

Forward throw is mainly used for stage control or to put opponents offstage for an edgeguard. It can also KO at higher percents.

Back throw is also used for stage control or to put opponents offstage for an edgeguard. Like forward throw, it can KO at higher percents.

Especially at lower percents, down throw is a combo starter for many of Ganondorf's moves, so it is usually the best throw to go for, unless you are near the ledge and an opponent is at a high percent.

Ganondorf's up throw puts an opponent directly above him, but doesn't provide any follow-ups, and doesn't KO, so it is usually better to choose another throw.

How to Unlock Ganondorf

There are three ways to unlock Ganondorf. Completing any of these, then defeating Ganondorf when they appear in the “a New Challenger Appears” screen will allow you to use them afterward. 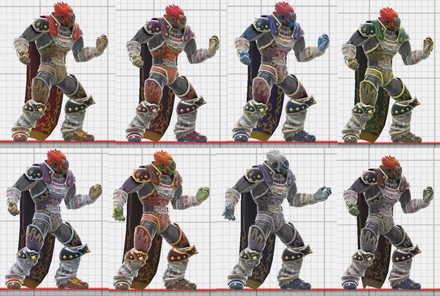 Register as a member and get all the information you want. (It's free!)
Login
Opinions about an article or post go here.
Opinions about an article or post
We at Game8 thank you for your support.
In order for us to make the best articles possible, share your corrections, opinions, and thoughts about "Ganondorf Guide: Matchup Chart and Combos" with us!
When reporting a problem, please be as specific as possible in providing details such as what conditions the problem occurred under and what kind of effects it had.