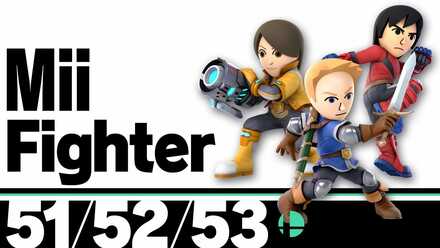 A swordie with a wide range of specials

Smash Ultimate Mii Swordfighter is a swordie who, like the other Mii Fighters, has several different special moves that can be chosen from when being created. Their Gale Strike and Chakram specials gives them projectiles and reliable combo tool, while they also have options such as a counter and reflector in their specials moveset. Mii Swordfighter also has a few powerful aerials, such as Up Air, which can be comboed into from their specials or a down throw. Lastly, since they use a sword for all non-specials, it gives them decent range overall.

Mii Swordfighter's weakness is their poor mobility and the fact that they are easily comboed, giving them a rather weak disadvantage state. If they use Hero's Spin for their Up B, it leave's them with a rather poor recovery, making them easy to edgeguard. Also, despite having a sword, their hitboxes are nowhere near as large as some of the other swordies in the game, meaning that they too can be outranged somewhat easily.

1. -2 = Disadvantage. -1 = Slight Disadvantage or Even. 0 = Even. +1 = Slight Advantage or Even. +2 = Advantage.
2. The matchup chart was based around both the opinions of professional players of each character, as well as our own experience through playing Mii Swordfighter.
3. Characters within each tier are unordered
4. Pokemon Trainer's individual Pokemon (Squirtle, Ivysaur, and Charizard) as well as Echo fighters with no significant difference than their regular counterpart are not shown.
5. For other characters who are not shown here, we are still investigating the matchup.

If you land the neutral air with forward inertia (while jumping forward), it will be easier to land the down tilt.

A combo that connects with a partial forward air. At 40% to 60% only, you can add an additional up air after up tilt.

Mii Swordfighter's killing combo. If both hits of forward air land, you will be unable to reliably connect the forward smash, so be careful.

A combo that begins with either down throw or down tilt. You can send your opponent flying diagonally forward with this combo.

This combo can connect at various percents. It has decent power and is easy to connect, making it a recommended combo of Swordfighter.

Down Throw→Skyward Slash Dash (Up Special)

A combo that makes use of Mii Swordfighter's second up special. The percent range for this combo is small, but it is powerful.

Down Throw→Hero's Spin (Up Special)

A combo that makes use of Mii Swordfighter's third up special. Hero's Spin has more range than Skyward Slash Dash, so use this combo to kill opponents.

A combo that makes use of Mii Swordfighter's first neutral special, Gale Strike, and third side special, Chakram. It can be quite difficult to connect these attacks, but you can dish out around 40% in damage if you can.

Mii Swordfighter has somewhat limited out of shield options, although Hero's Spin is a great OOS punish if you have it equipped, as it functions similar to Link's up special. If you don't have it set, you'll generally want to go for a shield grab, which is 10 frames, and can lead to a confirm with down throw. Up smash is also a decent punish for more unsafe options, but the initial hitbox will only hit opponents directly in front of Mii Swordfighter, and whiffing it will lead you very open for a punish.

Mii Swordfighter's is slow for a jab in general, but it's one of Mii Swordfigher's quickest attacks, so it's useful as a get-off-me tool at close range.

Mii Swordfighter's dash attack has a quick startup. Since the attack starts from above Swordfighter's head and comes down, it can be used to try and catch opponents who are landing.

Mii Swordfighter's forward tilt does high damage. You can turn around to face an opponent with it, so can be used as a spacing tool out of a dash away from an opponent. At very high percents, it can even KO.

Mii Swordfigher's up tilt is a sword swing with a wide range in the upward direction, which makes it useful as an anti-aerial, or against opponents about to land. It can combo into itself at lower percents, as well as aerials at higher percents, making it a decent combo starter.

Mii Swordfighter's down tilt has quick startup. It also has extremely little ending lag, and is -6 on shield, making it a great poking tool. It works as a combo starter.

Mii Swordfighter's up smash also deals great damage and knockback. It's similar to an Up Tilt, but it's better as a KO move and an out of shield option.

Mii Swordfighter's down smash has the quick startup of all of their smashes. It has somewhat low knockback and sends opponents at a low angle, so it can set up for edgeguards.

Mii Swordfighter's neutral air has a wide attack range. Its startup is much too slow to use as a get-off-me tool, but it works as a combo starter and spacing tool.

Mii Swordfighter's forward also has a wide attack range. The attack has three forward stabs, which makes it good for walling out an opponent and denying their approach. It's mainly used as a spacing tool, though it is not very safe on shield.

Mii Swordfighter's up air has extremely good damage and knockback. It's mainly good for juggling, but you can also aim for a KO by connecting it with Neutral Special #1 (Gale Strike), as well as down throw.

Mii Swordfighter's down air has a very long lasting hitbox. Take advantage of this long duration and strong downwards hitbox by using it on a recovering opponent to get an edgeguard.

Mii Swordfighter fires a tornado that launches the opponent into the air. It's great as a long-range poking tool, because of the attack's distance and large hitbox. It's also great for combos, because the knockback is set, regardless of what the opponent's damage percentage is. It will combo into an up air, which can KO at higher percents.

Mii Swordfighter throws a shuriken towards his opponent. The further away the opponent, the higher the damage dealt upon impact. If the opponent is very close, there won't be any hitstun, so make sure to space it properly.

Mii Swordfigher thrusts multiple times forward with his flaming sword. This special can be charged by pressing and holding the special button. The higher the charge, the stronger the damage and knockback dealt. However, we recommend using a different special, due to its lengthy startup and end lag.

Mii Swordfighter performs a spin move attack against his opponent. It has a slow start-up, but it's quick for closing the distance between you and the opponent. It also has a strong knockback when it connects.

Mii Swordfigher makes one great lunge forward, stabbing the opponent. This special can be charged by pressing and holding the special button. The longer the charge, the further Mii Swordfighter lunges and the greater the damage dealt. If used in the air, Mii Swordfighter will go into helplessness afterward.

Mii Swordfighter throws a chakram at his opponent. You can angle the chakram throw using the control stick. You can also increase the chakram's speed by inputting it like a smash attack. The chakram returns like a boomerang, so you could possibly hit the opponent twice if timed correctly. This move is useful for chaining several combos with Mii Swordfighter's aerials.

Mii Swordfighter jumps and slashes with his sword, then stabs their sword forward as they're falling. The jump distance is high and you can also move laterally while midair, so it's the best recovery move that Swordfighter has in their kit.

Mii Swordfighter slashes his sword forward multiple times in the air. You can control the direction of the attack, but the distance travelled is somewhat short.

Mii Swordfighter does a spin attack, similar to the Links. In the air, the spin move does multiple hits. On the ground, however, it knockbacks opponents with one strong hit. The ground attack can be charged to deal greater damage and knockback. While it is somewhat poor as a recovery option, it is a very good out of shield option.

Mii Swordfighter's counter doesn't have a lengthy end lag after a successful counter, which makes it good for edgeguarding. Also, since it has the property of slowing you down when used in the air, it can also be used help time your recovery.

Mii Swordfighter performs a slash that reverses projectiles and sends opponents facing the opposite direction. Similar to Mario's cape, it can be used offstage before an opponent recovers to send them away from the stage.

Mii Swordfighter lunges forward with their sword. Performed on the ground, the hitbox will extend sideways, while performed in the air, Mii Swordfighter will lunge diagonally downward. It's great for closing the distance between you and the opponent, but keep in mind that the further the opponent, the lesser the damage dealt.

Mii Swordfighter kicks his opponent forward. It can't be used for combos, so use it primarily for sending your opponent off the stage.

Mii Swordfighter tosses and kicks his opponent backwards. It similarly can't be used for combos, so it is also mainly used for stage control.

Mii Swordfighter throws their opponent upward. It won't lead into any combos, so down throw is the better option.

Mii Swordfighter slams their opponent downward and sends them upward. You can connect it to an aerial attack such as up air to rack up damage, making it the go-to throw when you land a grab.

How to Unlock Mii Swordfighter

In order for us to make the best articles possible, share your corrections, opinions, and thoughts about 「Mii Swordfighter Guide: Matchup Chart and Combos | Super Smash Bros Ultimate」 with us!