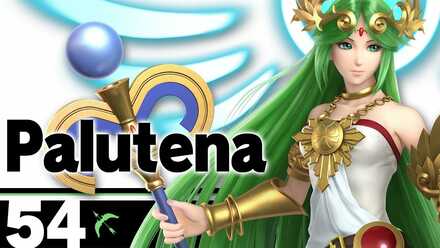 This is a guide to Palutena in the game Super Smash Bros. Ultimate. Everything about Palutena, including how to unlock them, bread and butter combos, frame data, alt costumes and skins, as well as Palutena matchups and counters, can be found here.

A strong and mobile fighter with a very versatile toolkit

Palutena in SSBU has great mobility, as well as access to strong projectiles (Neutral B and Side B), as well as powerful aerials. She has considerable lag on some of her grounded options, but she can make use of her wonderful aerials such as Nair and Bair to combo her opponents for tons of damage.

1. -2 = Disadvantage. -1 = Slight Disadvantage or Even. 0 = Even. +1 = Slight Advantage or Even. +2 = Advantage.
2. The matchup chart was based around both the opinions of professional players of each character, as well as our own experience through playing Palutena.
3. Characters within each tier are unordered
4. Pokemon Trainer's individual Pokemon (Squirtle, Ivysaur, and Charizard) as well as Echo fighters with no significant difference than their regular counterpart are not shown.
5. For other characters who are not shown here, we are still investigating the matchup.

Palutena enjoys a wonderful matchup spread, so there are really only a handful of counters that are not good for Palutena. Palutena does wonderfully against big bodied characters, as her attacks have large hitboxes that are very easy to land. Additionally, her neutral aerial is disjointed and takes priority over most other aerials, so characters who rely a lot on their aerials will struggle to fight against her superior aerial game.

There are only a few characters who can truly be said to counter Palutena, given her amazing matchup spread. Of those, rats (Pikachu/Pichu) do very well against her for their ability to get in up close and combo her. Characters with good ground game also can be used to counter Palutena, as her grounded options are limited relative to her aerial ones. Thus speedy characters like Roy and Inkling are some of her notable losing matchups.

How to Beat Palutena

Bait out Dash Attack and Bair

Palutena's Back Air and Dash Attack have invincibility frames on the shield, and she will win most trades with them. By throwing out some type of attack and then baiting her to try and trade with one of these moves, you should be able to draw back, dodge the move, then follow with a grab or some type of counterattack. Neither of these are particularly safe on shield, so if you can trick your opponent into using on one of them, shielding or dodging the move, you should have plenty of time to retaliate.

SDI from Down Throw

It is possible get out of Palutena's down throw to Bair combo, by SDI'ing out of it. Do this by wiggling your left stick in the drection that Palutena is facing (therefore, you should SDI out). Since Palutena cannot kill with a foward throw or down throw alone, SDI is very important in this matchup.

Avoid being too campy

With the huge hitboxes on her Ftilt, Nair, and Up Smash, Palutena is good at beating out campy playstyles. However, while ther grounded options do have long lasting and large hit boxes, they all have significant lag, so she can be punished with an attack or out of shield option. You will need a very fast OOS option if you plan to counter her Nair on your shield, but that does not mean it is impossible.

Try to counter her jumping

As stated earlier, her grounded options are strong and have long-lasting hit boxes, but the slow startup and end lag make them a bit risky. Therefore, Palutena mains tend to rely mostly on their aerial options to fight. Palutena's Up B and Up Smash are terrible OOS options, so Palutena will tend to rely on Nair as her main OOS option. If you can read her Nair out of shield, you should be able to punish it.

Palutena's Best Out of Shield Options

One of Palutena's weaknesses is her lack of good out of shield options. For the most part, all she has is Nair, which does come out on frame 8, but it can also be blocked and countered, and it becomes pretty predictable. Her grab is frame 11, which is not too slow, but not particularly quick either. However, it makes up for it with its massive range. Depending on the size of your opponent, and the move they hit your shield with, Nair is generally your go-to option, but sometimes it is better to not try and punish quick attacks on her shield.

This move is a multi-hit when you hold A or press it repeated after the second Jab input. This is good for catching an opponent up close when they are trying to run away.

Palutena's Dash Attack is pretty strong, and has a quick startup. On top of that, the shield that she uses on it has invincibility, so it is great for catching landings, but it is very unsafe on shield

Palu's Ftilt has a big and long lasting hitbox, making it a great move when it hits. This attack is best used on enemies who are dashing in or short hopping, thanks to its range.

This move also has a big and long lasting hitbox. While using this attack, Palutena crouches down, making it rather tough to hit opponents who are using an aerial. It can send opponents into the air, and even KO.

This move has wonderful range. It may feel similar to Ftilt, but it has a smaller hit box in exchange for faster cooldown. In neutral, Ftilt is usually the better option, but this move does on excellent job of two-framing opponents, which is its most useful application.

Palu's Fsmash has a big hitbox, and can send opponents pretty far. The first hitbox is a regular attack, while the later hitbox is just a windbox, which pushes enemies away without dealing damage. This may allow you to escape a counterattack when the strong hitbox misses.

Palutena's up smash has a long-lasting and enormous hitbox, probably the largest one in the game. It is a strong attack, and has many useful applications, such as catching an opponent jumping onto the stage, hitting the before they grab ledge, or even countering an aerial.

This move sends an attack on both sides of Palutena simultaneously. Hitting with the tipper of the wings reduces the damage output, as well as the distance the opponent goes. On the other hand, hitting close will deal more damage and push them much further. Just like her Fsmash, it has a windbox, which can push opponents away.

Palutena has one of the best Nairs in the game, due to its long-lasting and large hitbox, and low startup. Up against big bodies like DK or Bowser, this move can combo into itself for massive damage.

Palutena's Fair has decent startup, good range, and very little landing lag. Fast falling one of these onto your opponent can lead to grabs or other follow-ups, and is a very quick option for Palu.

This move has quick startup and little landing lag. It doesn't have the range of Fair, but it sends opponents much further, and is a great KO tool. Much like her Dash Attack, the shield is invulnerable, and can beat out most other attacks.

Palu's Up Air is great for juggling with its wide hitbox. This move will send opponents very high upward, so it is a pretty easy way to get KOs off of the top.

Palutena's Dair also has pretty decent startup. It can also spike opponents trying to recover low, but on the flip side, it has pretty noticeable landing lag.

Palutena's neutral special fires three quick beams of light, which will automatically aim at an opponent. It is a good tool for attacking from a distance and making an opponent approach, but it can be easily dodged by moving/jumping over it.

This move has a long-lasting and large hitbox, and can send opponents pretty far away. This move has excellent range, allowing her to threaten her opponents from a safe distance. It has serious lag, but startup and cooldown, so in general you do not want to use it when your opponent is close. However, this move makes it extremely easy to edgeguard opponents, without even having to leave the stage. The position of the flame's hitbox can also be altered by adjusting your stick when using this move.

This move allows Palutena to warp forward in the direction held, immediately after inputting the move. By warping right to the edge of the stage or a platform, you can reduce the end lag of the warp (teleport cancelling). This move travels pretty far, and makes it considerably difficult to edgeguard this character.

Palu's down special is a counter. If she receives an attack right after inputting this move, she can strike back without taking damage. On top of that, it can reflect incoming projectiles. While this is not an opportunity that presents itself often, it is impossible for Palutena to use this move to counter and reflect at the same time.

This move throws the opponents foward, and is mostly used for stage control. If the opponent doesn't immediately airdodge, you can follow it up with a neutral B.

This move throws the opponent behind Palutena. It is mostly useful at higher percents, as it is a kill throw that can be used to KO an opponent near ledge.

Throws the opponents directly upward. It cannot combo into anything else, but it does open up opportunities for juggling.

Palutena's down throw is an excellent combo starter at low percents. This is your go-to throw in most cases, and can even lead to KO setups at higher percents.

How to Unlock Palutena

There are three ways to unlock Palutena. Completing any of these, then defeating Palutena when they appear in the “a New Challenger Appears” screen will allow you to use them afterward. 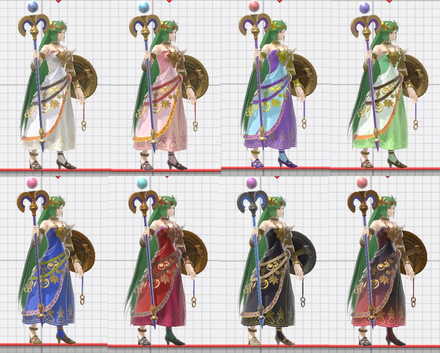 Register as a member and get all the information you want. (It's free!)
Login
Opinions about an article or post go here.
Opinions about an article or post
We at Game8 thank you for your support.
In order for us to make the best articles possible, share your corrections, opinions, and thoughts about "Palutena Guide: Matchup Chart and Combos | How to Beat Palutena" with us!
When reporting a problem, please be as specific as possible in providing details such as what conditions the problem occurred under and what kind of effects it had.