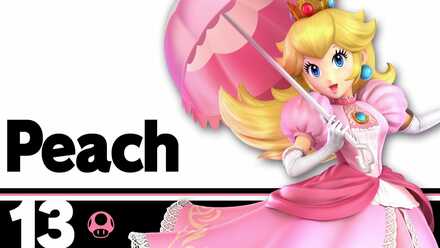 This is a guide to Peach in the game Super Smash Bros. Ultimate. Everything about Peach, including how to unlock her, bread and butter combos, frame data, alt costumes and skins, as well as Peach matchups and counters, can be found here.`

A character with powerful combos and edgeguarding capability

Peach, as well as her Echo Fighter counterpart Daisy, has a wide variety of poweful combos that can be used from aerials, and can also use floating and turnips to edgeguard her opponents. Floating low and landing with a Bair can also be repeated to poke opponents and apply heavy pressure. Her combos are high-execution, but if mastered, can be very rewarding.

Since Peach is so floaty, and her movement speed is a bit slow, she has a rather poor disadvantage state, as she is prone to juggling. She also struggles against projectiles and disjoints, but if she can get an advantage on her opponent, she is capable of dishing out deadly damage.

1. -2 = Disadvantage. -1 = Slight Disadvantage or Even. 0 = Even. +1 = Slight Advantage or Even. +2 = Advantage.
2. The matchup chart was based around both the opinions of professional players of each character, as well as our own experience through playing Peach.
3. Characters within each tier are unordered
4. Pokemon Trainer's individual Pokemon (Squirtle, Ivysaur, and Charizard) as well as Echo fighters with no significant difference than their regular counterpart are not shown.
5. For other characters who are not shown here, we are still investigating the matchup.

Down tilt has little end lag which makes this combo a must for Peach players. At 0-15% side special can also reliably be connected to add more damage. After 15%, connect aerial attacks. We recommend using up air to send your opponent into the air, allowing you to land safely. At around 100% up special will also connect with this combo.

Down throw will connect with short hop(or full hop)→back air from 0-100%. This combos works with a large number of percents, so be sure to remeber this combo. At lower percents, neutral air and side tilt will connect, and at higher percents, up air will connect.

The floating down air combo is basically the same as the down air combo, but you can rack up much more damage without having to continuously short hop.

How to Float as Peach

Hold Jump or Up to Continue Floating

Once you have activated a float, you can hold either Jump or ↑ on the control stick to continue floating.

Up B is only 7 frames, making it a fast out of shield option for opponents up close. Nair is another quick option, and since floating works out of shield, you can easily float toward or away from an opponent after using it.

Peach's jab comes out quite fast. The second hit will send opponents back, so be sure to follow through with both hits.

Dash attack has great range and comes out fast. Its hitbox also stays out for a while, making it a good attack for punishing landings. Like most dash attacks, it is unsafe on shield, so don't be too reckless with it.

Peach's forward tilt kicks up your opponent. The kicking animation is quite large, covering the entire front area she kicks from and above her. It is a good anti-air attack.

Peach's up tilt has great range, hitting well above the area over her head, so it can be used to catch landings.

Peach's down tilt lightly tosses your opponent into the air. It has little end lag and can will not knockback opponents very far even at high percents, making this a great combo starter. This attack is -8 on shield, making it just safe if timing and spacing are correct.

Peach's forward smash changes based on the angle you input. By changing the angle upward, downward, or straight forward (no shift), the weapon will change to either a golf club, tennis racket, or frying pan.

The KO % was calculated by using Mario as the opponent.

Peach's up smash has great upward range. The attack itself is similar to up tilt, but it comes out slower, so it is mainly only used when opponents have reached KO percent (or if you are certain it will connect, and you want a bigger punish).

Peach's down smash comes out quick and has a lingering hitbox. It is mainly used to prevent opponents from grabbing the ledge, or to catch an opponent's roll.

Peach's neutral air comes out fast and has very little endlag. It can be used as a get-off-me tool or as a out of shield option.

Peach's forward air has a wide hitbox and high knockback, making it commonly used as a combo finisher or KO move. This move is -2/-3 on shield, making it extremely safe for shield pressure when properly spaced, so it's a great poking tool.

Peach's back air comes out fast. It has rather short range, but you can take advantage of its low landing lag with crouch+jump+bair+landing repeated quickly. This barrage is strong, but bair can also be combined with float to edgegaurd opponents. This attack is -6/-8 on shield, making it a safe move to pressure shields in some cases.

Up air has long active frames and a wide hitbox, making it a powerful move for juggling opponents.

Peach's dair has a great hitbox. This lingering hitbox can be used for edgeguarding and preventing recoveries. The last hit of dair will also send your opponent upward, allowing you to start powerful combos. Dair is -6/-5 on shields, so when combined with float, it can be used to pressure shields.

Peach's neutral special is a counter. Typically counters are great for edgeguarding exploitable recoveries, but Peach already has a great edgeguarding option by attacking enemies in the air while floating. For enemies with predictable recoveries like Ike's side special or DK's up special, time it correctly and counter them.

Unlike other counters, it does not deal more damage depending on the move it counters.

Peach's side special comes out fast and can send your opponent flying to the side. Although it is unsafe on shield, it is sometimes tough to punish because of the way it bounces off. Note that if whiffed it is easy to punish, however.

Peach's up special will send your opponent into the air. This is not only a recovery move but a combo move as well. It can connect with down tilt at various percents. Peach has an excellent recovery when her float ability and up special are combined, however note that if she is facing away from the ledge when up special is used, she will not be able to grab the ledge.

Peach's down special can only be used while on the ground, and it pulls up an item that can be used. The items are 1 of 8 types of turnips, Mr. Saturn (rare), or a Bomb-omb (very rare). The variety of turnips can vary greatly, but they are split into 4 different types in terms of damage. You can still pull a Mr. Saturn or Bomb-omb even if items are turned off.

Mr. Saturn can break shields, and Bomb-omb will KO very early, so use them wisely if you happen to pull one.

Peach's forward throw is good for throwing your opponent off stage or gaining stage control.

Peach's back throw can KO opponents at high percent.

Peach's up throw can toss your opponent up into the air, so it is really only good against characters with very poor disadvantage.

Peach's down throw will make your opponent slightly float behind you. After down throw, bair, nair, or up air can be easily connected, making down throw is the most viable of all of Peach's throws, and the typical follow up for a grab.

How to Unlock Peach

There are three ways to unlock Peach. Completing any of these, then defeating Peach when they appear in the “a New Challenger Appears” screen will allow you to use them afterward. 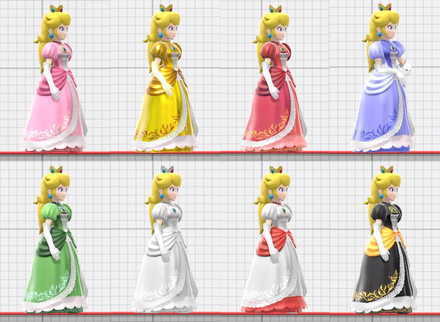 Register as a member and get all the information you want. (It's free!)
Login
Opinions about an article or post go here.
Opinions about an article or post
We at Game8 thank you for your support.
In order for us to make the best articles possible, share your corrections, opinions, and thoughts about "Peach Guide: Matchup Chart and Combos | How to Float as Peach" with us!
When reporting a problem, please be as specific as possible in providing details such as what conditions the problem occurred under and what kind of effects it had.