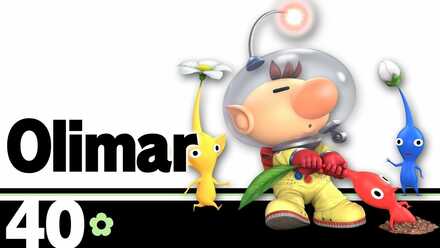 This is a guide to using Olimar in Super Smash Bros. Ultimate. Olimar's bread and butter combos, how to unlock, frame data, alt costumes and skins, as well as Olimar's matchups, counters, and tier list placement can all be found here.

A character with powerful zoning ability and smash attacks

In Smash Ultimate, Captain Olimar is able to throw Pikmin with Side B and make use of his very powerful and quick up smash. Using neutral B, Olimar can pluck Pikmin, with each type having slightly different attributes. Olimar's Pikmin and zoning allow him to play defensively by baiting and punishing his opponents.

Olimar's primary weaknesses are in his light weight and mediocre recovery. Both of these factors lead to olimar often getting KO'ed early, meaning that playing safely is extremely important.

1. -2 = Disadvantage. -1 = Slight Disadvantage or Even. 0 = Even. +1 = Slight Advantage or Even. +2 = Advantage.
2. The matchup chart was based around both the opinions of professional players of each character, as well as our own experience through playing Olimar.
3. Characters within each tier are unordered
4. Pokemon Trainer's individual Pokemon (Squirtle, Ivysaur, and Charizard) as well as Echo fighters with no significant difference than their regular counterpart are not shown.
5. For other characters who are not shown here, we are still investigating the matchup.

Olimar's small body and impressive zoning ability gives him a winning or even matchup on the majority of the roster. He can zone out characters like Zero Suit Samus, Diddy, or Wario, and his small body makes him hard to combo.

Olimar struggles most against characters with large disjointed projectiles that can beat out his own. Most swordies are difficult more him to approach, and characters like Cloud, Lucina, or Shulk have good frame data and range to beat out his hitboxes and win most exchanges

Olimar Combos and How to Use

The following video guide was made by DKBill, a Smash Bros. veteran with years of experience in the scene, and tons of tournaments under his belt. If you enjoy his video, be sure and check out the rest of his Youtube content and give him a like and subscribe!

This combo can be used on opponents with lower percents. An easy combo that can deal around 20% in damage. However, when the Blue Pikmin is used that makes throws stronger, this combo won't connect.

Nair (do not land the last hit)→Up Tilt

This combo can be used on opponents with various percents. After landing this combo, look to land an up smash or up air.

This combo can be used on opponents with various percents. An easy combo that can deal around 20% in damage.

This combo can be used on opponents with lower percents. An easy combo that can deal around 32% in damage.

This combo can be used on opponents with lower percents. An easy combo that can deal around 37% in damage. However, opponents can avoid the second up smash by dodging, so the up smash, jump, and forward air combo is recommended.

Olimar's quickest out of shield options are 10 frames, so he will not be able to punish safely spaced moves that come into contact with his shield. While nair and fair are his quickest options, up smash is typically his best out of shield punish. It comes out in 12 frames, and will hit opponents on either side of him, as well as above him, but don't try to use it against a character that is too far away.

Olimar has a 2-hit jab that comes out fast. If you only throw out the first jab, your opponent can counterattack, so be sure to throw out both jabs when the first connects. It can combo into down tilt at low percents.

Dash attack can cross through shields and comes out fast. It can combo into an aerial from 0% to 10%.

Up tilt comes out slowly. It is just as fast as forward smash, making forward smash a better move to use in most cases. However, this attack can still be used when Olimar has no Pikmin.

Up tilt comes out fast and has a front and back hitbox, but short range. Use it as a get-off-me attack at close range.

Down tilt has good range, but comes out slow, making it unsafe on shields. It is a great combo starter and can lead into a numerous things including another down tilt (for fast fallers), up tilt, smash attacks, and aerials. It can also be used to edgeguard due to its hitbox going below the ledge.

Olimar's foward smash has great range. Because Olimar actually throws a Pikmin, this attack can be reflected.

Up smash has fast start up with very little end lag. This move is excellent for starting combos. Any aerial can be used out of up smash at lower percents. A chain of up airs can be particularly effective following an up smash. Its low end lag makes it suited for an out of shield option or for punishing landings.

Down smash has long range, but it can be relflected just like other smash attacks, so be careful if your opponent has one of these.

A quick move that can be used as a get-off-me attack in the air or when landing. It is one of the few moves where Olimar does not need a Pikmin to attack. Nair hits for -11 on shield, making it unsafe.

Fair is a triple threat of fast start up frames, good reach, and good damage. It has low end lag as well, making it a great attack to use. It can combo after down throw and is safe to use on shield if spaced correctly.

Bair is Olimar's strongest aerial and also has very little end lag. This makes it great for combos and also safe on shield if correctly spaced. It has higher start up frames compared to Olimar's other aerials, but it also works as a KO move at higher percents.

Up air is a powerful aerial attack with good range. Its long hitbox and using the Pikmin as the hitbox makes it difficult out-space, and it perfect for juggling opponents trying to land. This move can combo into other aerials, but has long landing lag.

Olimar's dair is a strong aerial attack with a long lasting hitbox. This allows it to be used for two frame punishes at the ledge. Its long disjointed hitbox allows it to snuff out other moves and is great for landing. However, this move has long landing lag and is punishable if used on shield.

This attack plucks Pikmin out of the ground to join Olimar's party. The order in which Pikmin are plucked is decided as Red, Yellow, Blue, White, and Purple.

Down special calls back your Pikmin with a whistle. This move not only calls back Pikmin, but can also rearrange their order and gives Olimar super armor while whistling. This move has very little end lag and can be canceled out of.

Olimar's up special has Winged Pikmin carry him upwards. Just pressing up on the control stick will give you the maximum height obtainable, but if you are carrying more Pikmin, the maximum height will decrease. You can cancel up special into an aerial attack, but afterwards you will fall to the ground.

This throw creates too much space from low percents to combo into anything.

Back throw will throw your opponent behind your back. From low percents this throw creates too much space to combo into anything. However, it is Olimar's most damaging throw. If paired with several Pikmin including a Blue Pikmin in the front, it is the most damaging throw in the game.

Olimar's up throw sends your opponent straight up. When performing up throw, Blue Pikmin will have the strongest damage and knockback, alllowing you to KO foes from 130%.

Olimar's down throw puts your opponent into the air. There is little lag after performing down throw, and it can be used as a combo starter.

How to Unlock Olimar

There are three ways to unlock Olimar. Completing any of these, then defeating Olimar when they appear in the “a New Challenger Appears” screen will allow you to use them afterward. 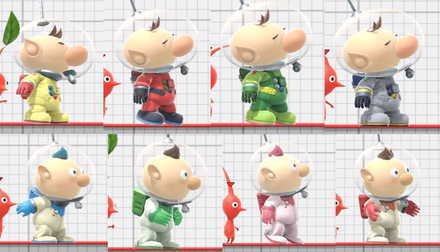 Register as a member and get all the information you want. (It's free!)
Login
Opinions about an article or post go here.
Opinions about an article or post
We at Game8 thank you for your support.
In order for us to make the best articles possible, share your corrections, opinions, and thoughts about "Olimar Guide: Matchup Chart and Combos" with us!
When reporting a problem, please be as specific as possible in providing details such as what conditions the problem occurred under and what kind of effects it had.