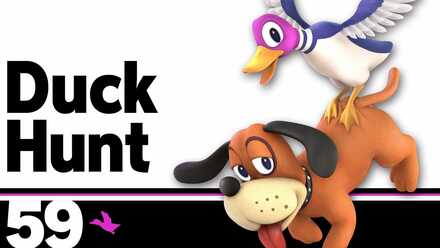 This is a guide to using Duck Hunt in Super Smash Bros. Ultimate. Duck Hunt bread and butter combos, how to unlock them, frame data, alt costumes and skins, as well as Duck Hunt matchups, counters, and tier list placement can all be found here.

A unique zoner with powerful projectiles

Smash Ultimate Duck Hunt has three projectiles via their specials, which allow them to control the stage and limit opponent movement. Their neutral B releases an exploding tin can, which can be moved at any time by hitting B again. This move can be combined with Duck Hunt's side special and normals to hit the opponent more easily. Duck hunt also has good aerial moves, allowing them to mix up both dfensive and aggressive play, using their projectiles to manipulate an opponent, before following up with aerials or smash attacks for KOs.

Duck Hunt's moveset is mainly focused on range, so they struggle a when fighting up close, if an opponent can break their zoning. They are also a bit tricky to KO with, primarily relying on Bair, or a smash attack. Otherwise, they will need to continue zoning until high percentages before most of their moves will KO. While their recovery provides decent distance, it has no hitbox, so they are susceptible to edgeguarding.

1. -2 = Disadvantage. -1 = Slight Disadvantage or Even. 0 = Even. +1 = Slight Advantage or Even. +2 = Advantage.
2. The matchup chart was based around both the opinions of professional players of each character, as well as our own experience through playing Duck Hunt.
3. Characters within each tier are unordered
4. Pokemon Trainer's individual Pokemon (Squirtle, Ivysaur, and Charizard) as well as Echo fighters with no significant difference than their regular counterpart are not shown.
5. For other characters who are not shown here, we are still investigating the matchup.

Duck Hunt has decent out of shield options, with neutral air and up air both coming out in 9 frames. This makes neutral air their go-to out of shield option for its lingering hitbox that covers Duck Hunt's whole body. Up Smash can also be used to hit opponents above or right in front of Duck Hunt, but since its back hitbox comes out later than the front one, an opponent attacking from behind will likely be able to dodge it before it connects.

Duck Hunt's dash attack has good range and can be used to catch opponents trying to land. It does not cross through shields, making it punshiable if shielded.

Duck Hunt's forward tilt is a useful tool for moving the position of Duck Hunt's can, or poking at an opponent on the ground. It can also be angled up or down to change the strength of its knockback.

Duck Hunt's up tilt is a fast attack that can be used as a combo starter, but it has a somewhat narrow hitbox and lacks intangibility, making it difficult to connect.

Duck Hunt's down tilt comes out fast and has similar uses as forward tilt, but it has less end lag than forward tilt, making it a bit safer to use.

Duck Hunt's forward smash has excellent range, damage, and knockback. In addition to its range, it has an long lasting hitbox which can catch opponents who rush in after the attack begins. If you charge the smash attack, its reach will be extended even further.

Duck Hunt's up smash has multiple hits and high damage and knockback. Its multiple hits (3 in total) make countering against this move difficult. Up smash's hitbox is also quite high, making small characters like Kirby or Jigglypuff unhittable if they duck.

Duck Hunt's down smash has excellent damage and knockback, but sends the opponent behind Duck Hunt. In order to use it effectively at the ledge, you will need to face away from the ledge.

Neutral Air is Duck Hunt's fastest aerial, coming out at 6 frames. It works well as an out of shield option or a mid-air get-off-me attack, but it does have significant landing lag, so it is not the best approach tool.

Duck Hunt's forward air comes out fast and can be used to keep your opponent at a distance or for combos. It is also useful for adjusting the position and direction of the can. Hitting the sweetspot of forward air will increase its damage and knockback.

Back air is a fast attack and the powerful sweetspot makes it one of Duck Hunt's reliable kill options. Use it by the ledge on opponents at a high percent to finish them off. Thanks to its range, it can be spaced to apply pressure from a distance.

Duck Hunt's up air has fast start-up and multiple hitboxes, making it easy to hit your opponent. Use it to juggle an aerial opponent and eventually KO them.

Duck Hunt's down air can spike opponents with its second hit. Connecting into a combo with this attack is difficult, although it is possible from side special.

Duck Hunt's neutral special is a can that will explode upon impact with your opponent. As you continue to press the special button, the can can be juggled up to a total of 8 times. It will start to smoke after 10 seconds and eventually explode by itself if left alone. The direction of the can is initially decided by the direction faced by Duck Hunt, but it can be changed by another attack. While it is mainly used for stage control by limiting the opponent's movement options, the can is also great for edgeguarding or helping to aid your own recovery. Placing the can is an essential part of Duck Hunt's zoning strategy, and an essential move to master for this character.

Duck Hunt's side special will throw a clay disc in front of him. If you are moving when you throw the disc, it will travel in a slower and overarching pattern. If you are still when you throw it, it will go further and more straight. If you push the button again while the disc is out, it will get shot with 5 quick shots. The clay disc can be used in a variety of ways. It is a great way to hinder a horizontal approach, and to edgeguard opponents off stage. It can also be left on the ground and then activated when your opponent gets close.

Duck Hunt's up special has duck carry you up into the air. While flying, Duckhunt is invulnerable, but after some time he can use an aerial or doge. However, doing so will leave Duck Hunt helpless.

Duck Hunt's down special will summon a one of 5 gunmen in front of him. Once one gunman is summoned, the remaining four must be recycled through before summoning him again. While each gunmen has different stats, all of them will be defeated if they take 5% damage or more.

You can use each gunman's unique stats for different starting times, ranges, and even use the gunman themselves as a shield. Basically, whenever there is some space between your opponent, throwing a gunman out is a good idea.

Forward throw primarily works to toss your opponent into the can or throw them off stage.

Use back throw to throw your opponent into can or off stage. This throw is good for adding on damage, but has very poor knockback.

Up throw cannot connect into any combos, so use it on opponents with poor landing options.

Down throw can connect into fair, making it a good throw to rack up damage and start a combo.

How to Unlock Duck Hunt

There are three ways to unlock Duck Hunt. Completing any of these, then defeating Duck Hunt when they appear in the “a New Challenger Appears” screen will allow you to use them afterward. 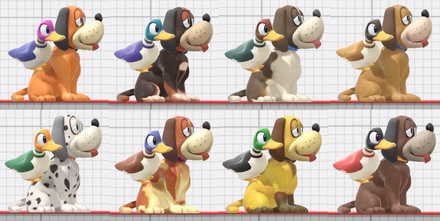 Register as a member and get all the information you want. (It's free!)
Login
Opinions about an article or post go here.
Opinions about an article or post
We at Game8 thank you for your support.
In order for us to make the best articles possible, share your corrections, opinions, and thoughts about "Duck Hunt Guide: Matchup Chart and Combos" with us!
When reporting a problem, please be as specific as possible in providing details such as what conditions the problem occurred under and what kind of effects it had.