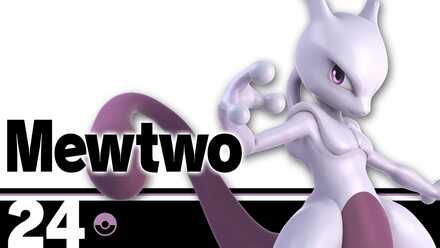 This is a guide to using Mewtwo in Super Smash Bros. Ultimate. Mewtwo's bread and butter combos, how to unlock, frame data, alt costumes and skins, as well as Mewtwo's matchups, counters, and tier list placement can all be found here.

A long to mid range zoner

Smash Ultimate Mewtwo can zone out opponents with its neutral special (B), and use its down tilt and forward aerial to fight at a mid distance. Use F-air and Dtilt to poke opponents and keep your opponents from getting too far in.

Mewtwo's main weakness comes from its large hurtbox size (which includes its tail), combined with light weight, which means Mewtwo will end up getting hit easily and dying rather early. It's very important for Mewtwo players to keep their opponents from approaching too closely by using tools such as side b and neutral aerial.

1. -2 = Disadvantage. -1 = Slight Disadvantage or Even. 0 = Even. +1 = Slight Advantage or Even. +2 = Advantage.
2. The matchup chart was based around both the opinions of professional players of each character, as well as our own experience through playing Mewtwo.
3. Characters within each tier are unordered
4. Pokemon Trainer's individual Pokemon (Squirtle, Ivysaur, and Charizard) as well as Echo fighters with no significant difference than their regular counterpart are not shown.
5. For other characters who are not shown here, we are still investigating the matchup.

Mewtwo has somewhat limited out of shield options. While up smash is the fastest out of shield punish it has, the attack only hits above Mewtwo, and won't be able to punish opponents in front of Mewtwo, especially if they are small. This makes neutral air its go-to out of shield option, since it is relatively fast, and covers Mewtwo's whole body. Additionally, shield grab can be used, though at 11 frames, it is not the fastest punish. As an occasional mixup, jump into side B can work as well, although it will take 13 frames.

Mewtwo's jab is relatively quick, and can go into a rapid jab by repeatedly pressing the attack button, so it is used as an up close get-off-me tool. If the full jab is followed through on an opponent, it can deal a lot of damage.

Mewtwo's dash attack has great range and knockback. It can be used to find an opening by whiff punishing an opponent's endlag, as well as to catch an opponent's landing.

Mewtwo's forward tilt has good range and knockback as well. While it is great for spacing out opponents, beware that Mewtwo's tail is not a disjoint, so it doesn't have intangibility.

Mewtwo's up tilt is quick, and hits the entire area above it, making it a good anti-aerial, but watch out for characters with disjoints who can beat it out.

Mewtwo's down tilt is very quick, and it is very useful as a poking tool, due to its low endlag. If the move hits at the base of the tail, it can lead into combos.

Mewtwo's forward smash deals high damage and knockback. The tip of the tail is the sweetspot of the hitbox, and hitting it will allow you to KO opponents before 100% in some cases.

Mewtwo's up smash comes out extremely fast (9 frames), and deals very high damage and knockback. It the opponent is very close to Mewtwo, it can be used as an out of shield punish, since there is a hitbox on Mewtwo's body in the startup frames, but be warned that it is somewhat inconsistent.

Mewtwo's down smash is slow, but extremely powerful. It only attacks directly in front of Mewtwo, but it can hit below a platform, making it very useful for edgeguarding an opponent grabbing the ledge.

Mewtwo's neutral air is tied with its forward air for its fastest aerial attacks. It has somewhat poor range, but a hitbox will cover Mewtwo's entire body, making it a good get-off-me tool.

Like neutral air, Mewtwo's forward air comes out in just 7 frames. It is a powerful move with great knockback, so it is useful for edgeguarding and KOing. It is also -3 on shield, making it very safe for poking, and one of Mewtwo's most essential tools.

Mewtwo's back air deals good damage and has great range. The hitbox is pretty big, and the move is safe on shield (-5/-6/-6), so it can be used to pressure shields and punish jumps.

Mewtwo's up air has a very large hitbox, making it a great tool to juggle opponents in the air, and can be comboed into.

Mewtwo's down air has a meteor hitbox on it. It reaches pretty far below Mewtwo, so it can be used to go offstage and spike opponents before they can grab the ledge.

Mewtwo's neutral special is a pivotal part of its kit. Pressing the special button allows Mewtwo to begin charging up a shadow ball, which can be fired at any time by pressing the button again. It can be cancelled mid-charge by jumping, rolling, spot-dodging, or shielding, as well as air dodging if done in the air. Once it is fully charged, it can be released at any time by pressing the special button once more, and releasing it at full charge makes it larger and more powerful. The move is good for both zoning opponents out, as well as edgeguarding.

Mewtwo's side special is a command grab, which will put an opponent into tumble. Additionally, it can reflect projectiles. It is useful when recovering to prevent an edgeguard, and can also combo into some of Mewtwo's other moves.

Mewtwo's up special allows it to warp across the stage in the direction the control stick is held. Since Mewtwo is invulnerable while warping, it is a powerful recovery, but be careful when using it on stage not to accidentally go off the stage with it, as Mewtwo will SD. When landing on the ground, it has somewhat long endlag and can be punished.

Mewtwo's down special temporarily disables the opponent. The higher their percent is, the longer they will be immobile, allowing it to confirm into smashes, but it doesn't affect opponents turned away from Mewtwo or those in the air. When using the move, Mewtwo is intangible from frame 10. This means Mewtwo can in effect use it to counter an opponent's grounded attack, giving him invulnerability and stunning the opponent in the process.

Mewtwo's forward is mostly used for stage control, although it also deals the most damage of all his throws, to is useful for racking up percent on an opponent. Near the ledge, it can KO at high percents.

Metwo's back throw is also used for stage control. It doesn't combo, but if used by the ledge, can KO opponents from about 100%.

Metwo's up throw sends an opponent into the air. It doesn't have any combos, but it can KO from the top at about 150%.

Mewtwo's down throw has a few combos, depending on the opponent's percent. At higher percents, it can be followed up with forward air to KO opponents.

How to Unlock Mewtwo

There are three ways to unlock Mewtwo. Completing any of these, then defeating Mewtwo when they appear in the “a New Challenger Appears” screen will allow you to use them afterward. 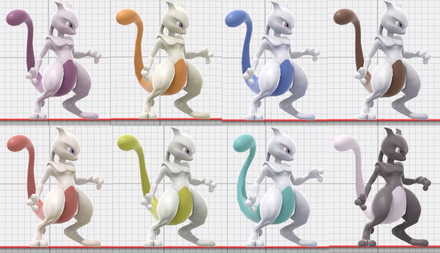 In order for us to make the best articles possible, share your corrections, opinions, and thoughts about 「Mewtwo Guide: Matchup Chart and Combos | Super Smash Bros Ultimate」 with us!