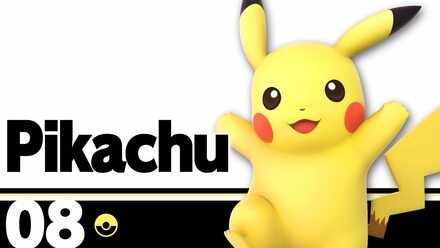 This is a guide to Pikachu in the game Super Smash Bros. Ultimate. Everything about Pikachu, including how to unlock them, bread and butter combos, frame data, alt costumes and skins, as well as Pikachu matchups and counters, can be found here.

A high-execution and speedy character

Smash Ultimate Pikachu boasts excellent speed and frame data, allowing it to utilize a wide variety of combos on its opponent. It also has a small body which can help it avoid getting comboed and dodge projectiles. Pikachu's specials are all useful as well, giving Pikachu a projectile, KO options, as well as a great recovery.

While Pikachu has several powerful attributes, its recovery is somewhat hard to use, and it is unsafe on shield. Pikachu is also very lightweight and prone to dying early, and can sometimes struggle to KO if the player misses their confirms. Therefore, Pikachu is a solid character, but best reserved for advanced players who are willing to put in the time to learn all of the character's combos and nuances.

1. -2 = Disadvantage. -1 = Slight Disadvantage or Even. 0 = Even. +1 = Slight Advantage or Even. +2 = Advantage.
2. The matchup chart was based around both the opinions of professional players of each character, as well as our own experience through playing Pikachu.
3. Characters within each tier are unordered
4. Pokemon Trainer's individual Pokemon (Squirtle, Ivysaur, and Charizard) as well as Echo fighters with no significant difference than their regular counterpart are not shown.
5. For other characters who are not shown here, we are still investigating the matchup.

Pikachu has good out of shield options, with three of his aerials coming out at frame 7 or faster. As neutral air is Pikachu's fastest option, it is the go to in most cases for punishing unsafe attacks.

Pikachu's jab is extremely fast, coming out in just 2 frames. Pikachu doesn't have a jab combo, but instead can cancel some of the endlag on his jab to use it repeatedly, though this will not combo. The move itself will just make an opponent flinch briefly, so it isn't the best combo breaker either. However, it can be used for ledge trapping, and for jab locks, making it a decent tool in Pikachu's kit.

Pikachu's dash attack has a quick startup, and deals good damage and knockback. It is mostly used as a way to catch opponents' landings, or for a KO at later percents. While the move is -12 on shield, it is very hard for opponents to punish in most cases, especially if the late hitbox hits.

Pikachu's forward tilt is a fast attack that can be angled up or down, with the upward angled version dealing the most damage. It can KO opponents at higher percents (150%+).

Pikachu's up tilt is quick, and is mostly used as a combo starter. It will send opponents upward, and combos into itself as well as aerials, depending on percent.

With decent range, and the fact that it is -5 on shield, Pikachu's down tilt is a decent poking option. It can also trip opponents, allowing Pikachu to set up a jab lock.

Pikachu's forward smash has good range as well as knockback. With it's long lasting hitbox, this move can be used for ledgetrapping as well.

Pikachu's up smash is pretty quick, coming out in 10 frames. Pikachu's tail doesn't gain invulnerability during the attack, so it won't beat out certain attacks, but it is good for catching a jump or a landing.

Down Smash is Pikachu's fastest smash attack. Its long lasting hitbox makes it good for punishing a roll. It does have noticeable endlag, so if an opponent reads it, they might be able to punish it.

Neutral Air is Pikachu's fastest aerial, coming out in only 3 frames, or 6 when combined with jumpsquat as an out of shield option. It has very short range, but the hitbox covers Pikachu's whole body, making it a good move to use for breaking out of combos, or when landing. Other than the final hitbox, it only barely knocks back opponents, which makes it a great combo starter. It is -7 on shield.

Pikachu's forward air has good range and deals good damage. It barely has any endlag, making it a good poking tool if spaced properly (-10/-9 on shield), and its startup is not too slow, so it is good for edgeguarding.

Pikachu's back air also has a quick startup, coming out in 4 frames. Like nair, it has multiple hits, but longer endlag than nair in favor of better range. Bair is good to use together with a jump, while Nair is better to use together with a fast fall to the ground. The move is great for comboing, and can be used for edgeguarding.

Back air comes up quickly as well, in just 4 frames. It doesn't deal a ton of damage, but the upward angle it sends opponents is ideal for comboing.

Pikachu's slowest aerial, although it does have a meteor hitbox in the startup, making it great for getting KOs offstage, and supplementing Pikachu's already potent edgeguarding ability.

Sends out an electric attack down and away from Pikachu, which will travel forward when it connects with the ground. It will follow the ground or wall , so it can be used to prevent an opponent from grabbing the ledge. It moves very quickly and can be used repeatedly, as well as shot out after a jump, making it a very useful projectile for applying pressure and racking up damage.

Pikachu launches its body straight ahead. By holding the special button before releasing, the distance and damage dealt will be increased. It can also be input like a smash attack to begin a bit charged. While useful for recovering horizontally, it is not as fast as up special, so in most cases up special is the better recovery option.

Up special will move twice in the directions of your choosing. After the first move, changing the angle will allow Pikachu to move a second time. Effectively using it makes Pikachu's recovery very hard to edgeguard, and it can be used to approach on stage, though it is punishable.

Pikachu's down special sends thunder from a cloud all the way to its head. If the opponent is hit by the hitbox on Pikachu's body, it will deal great damage, and considerable knockback. It can be comboed into from up throw for a KO at higher percents, though if their % is too high they will be able to DI out of it easily.

Pikachu's forward throw doesn't KO or combo, so it is mainly used for gainng stage control or putting an opponent offstage to setup for an edgeguard.

Pikachu's back throw is essentially used for the same purposes as forward throw, though it can KO at very high percents if next to a ledge.

Launches an opponent lightly into the air. It deals less damage than up throw, but it is much better as a combo tool than up air at low percents, and will combo into any aerial except down air.

How to Unlock Pikachu in World of Light

In World of Light, Pikachu can be found in the Cliffside Rapids, located in the west area of the map. Find and defeat Pikachu to add it to your party!

In order for us to make the best articles possible, share your corrections, opinions, and thoughts about 「Pikachu Guide: Matchup Chart and Combos | Super Smash Bros Ultimate」 with us!