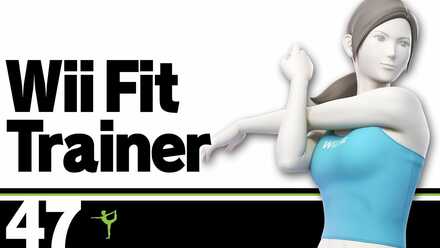 A unique character with projectiles and buffs

Smash Ultimate Wii Fit Trainer is a unique character, due to their ability to buff themself with Deep Breathing (Down Special), and use two projectiles, one of which will allow them to slightly recover HP. Their thin body frame makes them somewhat hard to hit, and they have rather good mobility, although they are somewhat floaty in the air, making them somewhat easy to juggle. Wii Fit Trainer is good at zoning thanks to side B, although they have pretty good aerials and normals as well, so they can fight decently up close.

Wii Fit Trainer's main weaknesses are in their disadvantage stage. They can be rather easily edgeguarded, and they are juggled easily, as mentioned above. They also struggle to kill without Deep Breathing, which lasts about 10 seconds, and has a significant cooldown time. This means that if they do not KO when it is active, they may have a hard time getting rid of their opponent's stock.

1. -2 = Disadvantage. -1 = Slight Disadvantage or Even. 0 = Even. +1 = Slight Advantage or Even. +2 = Advantage.
2. The matchup chart was based around both the opinions of professional players of each character, as well as our own experience through playing Wii Fit Trainer.
3. Characters within each tier are unordered
4. Pokemon Trainer's individual Pokemon (Squirtle, Ivysaur, and Charizard) as well as Echo fighters with no significant difference than their regular counterpart are not shown.
5. For other characters who are not shown here, we are still investigating the matchup.

This is a combo that uses Ftilt's backside of the attack to launch the enemy vertically. By doing so, it becomes easy to follow it up with an aerial attack.

This combo can be used using the two full hits of NAir. It deals less damage than the next combo but is easier to execute.

This combo again, relies on two full hits of both NAir to fully execute it. If either misses, the combo will fail.

The easiest to execute combo from NAir. It doesn't need both hits of Nair to chain Up Air and can work against enemies below 100%.

This combo requires you to hit Fair's sour spot to connect Ftilt into the combo.

This combo again, requires you to hit Fair's sourspot to connect Fsmash for a decent amount of damage.

An easy down Throw combo that can easily be followed up by BAir or Up Air for easy damage. Both doesn't have kill potential but using Up Air instead of Bair can deal more damage.

A throw combo using Up Throw. It can work at mid percentages and can easily be followed up by FAir or Up Air for more damage.

Wii Fit Trainer has somewhat poor out of shield options, making it hard for them to deal with shield pressure. While up special is a very quick option to use, it deals very little knockback, even at high percents, has very little range, and opponents will often be able to get out of it and punish its landing. Back air is situational, but a good tool for opponents behind your shield. Generally, a shield grab is the most practical out of shield option, since it comes out reasonably fast, and has decent range, although it won't be quick or long enough to punish safely spaced moves.

Wii Fit Trainer's Jab combo happens in three hits in a very quick start up. The third hit buries opponents, opening them up for a follow up attack. Additionally, the first hit has a hitbox behind it that lightly knocks opponents away, making it a good get-off-me tool.

Wii Fit Trainer's Forward Tilt is a versatile move with a quick start-up. Its forward hitbox has strong horizontal knockback while its back hitbox knocks opponents directly upwards, so it can be used for combos.

Wii Fit Trainer's Up Tilt has quick start up, and the arm part gains intangibility, but it is hard to use as an anti-air due to its narrow hitbox.

Wii FIt Trainer's Down Tilt is quick and deals good damage, but its short range and a sizable end lag make it difficult to make use of. Its main application is for hitting opponents on the ledge.

Wii Fit Trainer's Forward Smash is a powerful move that has good range, knockback, and deals a good deal of damage. Since Wii Fit Trainer can use Deep Breathing to power up the KO power of their other moves, you don't need to try and force a Forward Smash in order to take stocks, so it's most used for hard reads.

Up Smash on Wii Fit Trainer deals a decent damage and knockback. The hitbox is narrow, but you become intangible momentarily, so you can use this move to try and snuff out an opponent's approach.

Wii Fit Trainer' down smash deals good damage and knockback, but it is also their slowest smash attack. Using it near the ledge can sometimes grant an early KO.

Wii Fit Trainer's Neutral Air has a decently fast startup. Its range is somewhat small, so it is best used right up on an opponents, where it can lead into other combos.

Wii Fit Trainer's forward air has a quick startup but short range, and hits at an awkward angle, so it isn't the best poking tool. However, the back hitbox has a meteor hitbox which could spike opponents when hit correctly.

Wii Fit Trainer's Up Air also has a fast startup, and it allows you to quickly hit above you, making it ideal for aerial combos or juggling an opponent.

While down air has a much slower startup than Wii Fit Trainer's other aerials, it can be used to get early offstage KOs thanks to its meteor hitbox.

Wii Fit Trainer's Neutral Special, the Sun Salutation, fires a projectile that can be charged by holding the special button. The charging can be cancelled in five different ways: moving the movement stick left or right resulting in a dodge, inputting a spot dodge, jumping, cancelling via shield, or pressing special again to fire it. When fired, it can launch opponents fairly far, and allows Wii Fit Trainer to recover 2% at a full charged, so try to charge it as much as possible.

Wii Fit Trainer's side special allows them to hit a ball with their head, and the trajectory of the ball changes depending on when you press the special button again. If you don't press it again, or press it late, the trajectory has it going more downward, whereas in pressing it early the trajectory goes a farther distance. Use this to read your opponent's movement and pick the appropriate direction.

Additionally, the headbutt part of the moe can meteor smash. It's hard to aim, but if you manage to land it, you could get an early KO.

This move is one of Wii Fit Trainer's main neutral tools, since it covers such great distance, Wii Fit Trainer can use it by the ledge to zone out their opponents.

Wii Fit Trainer flies up using a handful of hula hoops in their Up Special, and repeatedly pressing the special button takes Wii Fit Trainer even higher. It's mostly used for recovery, though it can damage close to Wii Fit Trainer when it is used.

Deep Breathing is a buff that allows Wii Fit Trainer to have increased strength with abdominal breathing. If you press the Special button when the shrinking circle overlaps with the red circle, Wii Fit Trainer gains a buff to damage dealt, knockback and movement speed for 10 seconds, and they recover 2%. Proper use of this move will allow Wii Fit Trainer to land KOs with much greater ease, so be sure to remember the timing, and use the move when your opponent reaches higher percents so is is not wasted.

Take note that if you try to perform this special more than once in a row, the breathing drastically slows down, leaving you much more open to an opponent's attack.

Wii Fit Trainer's forward throw will launch your opponent forward. It can't be used for combos, so use it when you want to take your opponent off stage.

Wii Fit Trainer's back throw will launch your opponent behind you. Like forward throw, it can't be used for combos, so use it when you want to put your opponent off stage for an edgeguard.

Wii Fit Trainer's up throw launches your opponent straight up, and can be followed up with aerial attacks like up air or forward air.

Wii Fit Trainer's down throw launches an opponent up and behind Wii Fit Trainer, allowing for a follow up with back air, up air, etc.

How to Unlock Wii Fit Trainer

There are three ways to unlock Wii Fit Trainer. Completing any of these, then defeating Wii Fit Trainer when they appear in the “a New Challenger Appears” screen will allow you to use them afterward. 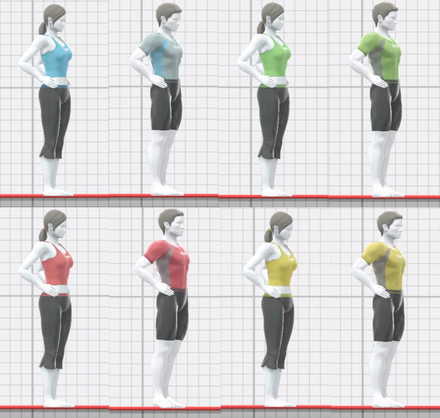 In order for us to make the best articles possible, share your corrections, opinions, and thoughts about 「Wii Fit Trainer Guide: Matchup Chart and Combos | Super Smash Bros Ultimate」 with us!