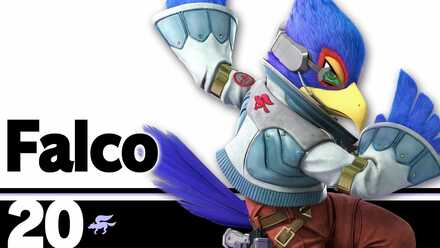 This is a guide to using Falco in Super Smash Bros. Ultimate. Falco's bread and butter combos, how to unlock, frame data, alt costumes and skins, as well as Falco's matchups, counters, and tier list placement can all be found here.

A combo heavy fighter who excels in aerial combat

Smash Ultimate Falco has several aerial attacks with long lasting hitboxes that can be strung into combos. After dealing enough damage with his combos, Falco can use his Forward Smash or Meteor Smash, along with his edgeguarding abilities, to finish off an opponent.

1. -2 = Disadvantage. -1 = Slight Disadvantage or Even. 0 = Even. +1 = Slight Advantage or Even. +2 = Advantage.
2. The matchup chart was based around both the opinions of professional players of each character, as well as our own experience through playing Falco.
3. Characters within each tier are unordered
4. Pokemon Trainer's individual Pokemon (Squirtle, Ivysaur, and Charizard) as well as Echo fighters with no significant difference than their regular counterpart are not shown.
5. For other characters who are not shown here, we are still investigating the matchup.

Falco has access to quick out of shield options, with neutral air coming out on frame 6 for a fast punish, as well as up smash at frame 7, which is great for hitting opponents above Falco. Falco's good grab game also makes shield grabbing a decent option as well, albeit a bit slower than the aforementioned moves.

Falco's jab has extremely quick startup, allowing it to function as a quick get-off-me tool, and as a combo finisher,

Falco's dash attack has quick startup and a long lasting hitbox, making it good for whiff punishing or catching landings. It has noticeable endlag, and cannot cross up shields, but it can be comboed into from some of his other moves.

Falco's forward tilt has quick startup, good range, ad can be angled up or down. Use it to control spacing and keep your opponent from moving in too close.

Falco's up tilt has extremely quick startup, and can be comboed into several of his other moves, making it a vital part to his kit. It can combo into itself or an aerial attack, so utilizing this move in neutral is one way to take advantage of Falco's spectacular air game.

Hitting an opponent with Falco's down tilt sends them up and slightly away, allowing him to folluw up with forward air, which can KO at higher percents. When spaced properly, it is relatively safe on shield, making it a good poking tool.

Falco's forward smash deals great knockback, but has noticeably slow startup, so it is mostly used for a hard read as a big punish.

Conversely, Falco's up smash is extremely fast, coming out on frame 7. At lower percents, it can be comboed into from up tilt or dash attack. Additionally, it is a great out of shield punish.

Falco's down smash is also very fast, coming out on frame 8, and hitting on both sides of Falco. It can be used for catching an opponent's roll, or as a get-off-me tool, since Falco's feet are intangible from frame 4.

Falco's neutral air is an attack where the upper half of his body will have a hitbox, and deal multi-hits to an opponent. It has very quick startup, but somewhat small range, so it can be used to try and snuff out an opponent's approach. If fast falled onto an opponent and landed before the final hit connects, it can be comboed into Falco's jab.

Falco's forward air has great range, and a deceptively long active hitbox. It is very good for edgeguarding opponents offstage. The move has a hitbox when landing, which many opponents tend to forget about, causing them to drop shield early and take damage. However, it is -10 on shield, so if an opponent holds shield until the landing hitbox ends, it can be punished.

Falco's back air is a powerful move, good for KOing opponents at higher percents. It has good range, so it can be used to pressure opponents and catch their jump.

Falco's up air has quick startup, and is excellent as a combo extender, or for juggling opponents in disadvantage. It can be comboed into from an up tilt.

Falco's down air has a meteor hitbox on the first kick. It comes out pretty quick for a spike, so it is a great tool for edgeguarding offstage. When used on stage, it can be comboed into other aerials.

Falcos neutral special is a blaster that fires much slower than Fox's, but will cause flinching, making it a good move to snuff out approaches. When fired from the air, the blaster will travel farther than it does from the ground, so it is good to combine with short hop. For characters with poor air mobility, it can be a good edgeguarding tool, as it will stun them midair and cause them to lose momentum.

Falco's side special lets him travel quickly in a horizontal direction. If it hits an opponent in the air, it has a meteor effect, which can in some cases lead to a reverse edgeguard. By inputting the move immediately after a jump, Falco can use it close to the ground, which lowers the amount of lag it has. However, if the move hits a shield, it will stop in place, leaving it open to a punish.

The move does not cause helplessness, so it is very useful for recovering horizontally.

Falco's up special is mainly used for recovering. It is very susceptible to edgeguards, especially if angled sideways, so it is best used from below the stage.

Falco's down special throws a reflector in front of him, which can send projectiles back at the user. It is a useful tool against zoners, and can begin reflecting projectiles from frame 1. Because of the fact that it cannot be held like Fox or Wolf's down special, moves like Link / Young Link's arrows which can be charged are able to hit Falco by timing the release right as the reflector's animation ends.

Falco's forward throw is mainly used for gaining stage control or putting an opponent offstage. It does not combo or KO, but it can sometimes be used to set up a jab lock.

Falco's back throw is mostly used for stage control or putting opponents off stage as well, but it can also KO opponents at very high percents when used near a ledge.

Falco's up throw is an excellent combo starter, allowing him to combo into up air, or his other aerials at about any percent, so it is often the go-to throw.

Down Throw will throw an opponent low to the ground, and at lower percents, can combo into dash attack or neutral air.

How to Unlock Falco

There are three ways to unlock Falco. Completing any of these, then defeating Falco when they appear in the “a New Challenger Appears” screen will allow you to use them afterward. 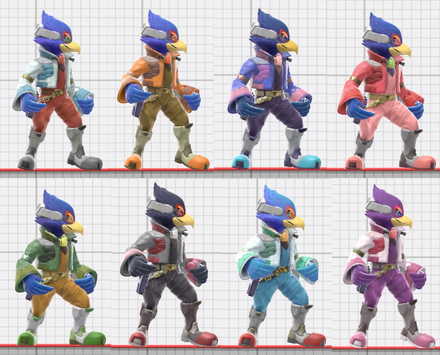 Post (0 Comments)
Opinions about an article or post go here.
Opinions about an article or post
We at Game8 thank you for your support.
In order for us to make the best articles possible, share your corrections, opinions, and thoughts about "Falco Guide: Matchup Chart and Combos" with us!
When reporting a problem, please be as specific as possible in providing details such as what conditions the problem occurred under and what kind of effects it had.