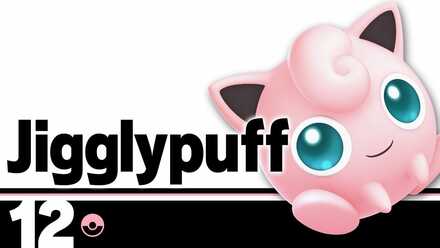 This is a guide to Jigglypuff in the game Super Smash Bros. Ultimate. Everything about Jigglypuff, including how to unlock them, bread and butter combos, frame data, alt costumes and skins, as well as Jigglypuff matchups and counters, can be found here.

Jigglypuff in Smash Ultimate is a fighter that primarily relies on its aerials to smother opponents, and knock them offstage for an edgeguard. Its long hitboxes on aerial attacks allows it to jump near opponents and apply pressure consistently. Jigglypuff also has Rest, which can be comboed into, and can lead to rather early kills.

Jigglypuff has several weaknesses, primarily in the fact that it is extremely light and easy to KO. It also has rather poor overall mobility, and may struggle to approach. Since it has no projectile, Jigglypuff often struggles against characters with good range or multiple projectiles, as it is prone to being zoned.

1. -2 = Disadvantage. -1 = Slight Disadvantage or Even. 0 = Even. +1 = Slight Advantage or Even. +2 = Advantage.
2. The matchup chart was based around both the opinions of professional players of each character, as well as our own experience through playing Jigglypuff.
3. Characters within each tier are unordered
4. Pokemon Trainer's individual Pokemon (Squirtle, Ivysaur, and Charizard) as well as Echo fighters with no significant difference than their regular counterpart are not shown.
5. For other characters who are not shown here, we are still investigating the matchup.

Jigglypuff's jab has similar start up frames to nair and fair, so it is better to use them over jab in almost any scenario, especially for poking or pressuring shields.

Dash attack can be used as a kill option at high percentages. It also has a long active hitbox, making it difficult to counter.

Forward tilt can send your opponent slightly back. Use this move to create some space between you and an opponent. You can also tilt this move up or down depending on the size of your opponent.

Up tilt can combo into itself, and can also KO opponents from about 130%.

Down tilt can send opponents flying to the side. When at high percents and near the ledge, use this attack on your opponent.

Jigglypuff's forward smash takes a large step forward, making its attack range quite long. If you mix it in with a dash, it becomes easy to connect.

Jigglypuff's up smash has a ull 180 degree range. However, it has slow start up frames which makes it risky to use.

Jigglypuff's feet for down smash are invulnerable. It also has high side knockback, making it one of the best smash attacks for Jigglypuff.

Nair has fast start up frames and its hitbox stays out a long time, making it a great move for pressuring opponents. If used against an opponent offstage, and can lead to a KO. It is one of her main approach tools, and is -5/-6 on shield, making it hard to punish from shield.

Forward has a long lasting hitbox and good range. It has low endlag, and is also -5/-6 on shield, so it's another good approach tool. Use this move to carry opponents off stage and edgeguard them.

Has a much shorter hitbox than Jigglypuff's other aerials, and is slower than nair/fair, but it is one of her strongest aerials, and can be used to KO. It has good range, and is good for spacing out opponents.

Up air has a lingering hitbox and can throw opponents into the air slightly, making it good for connecting combos. When your opponent is around middle percents, connect up air with down special to finish them off.

Dair has a lingering hitbox and can be used to snuff out an opponent's attempt for a follow up attack. It can also combo into down special by landing before the final ht and then using rest.

Jigglypuff's neutral special will charge up power then perform a quick rolling attack. This attack does massive shield damage, and it can be used to break shields by reversing and hitting it multiple times. Be careful when using it not to SD.

This attack has a large long lasting hitbox and is powerful, making it a superb move in Jigglypuff's kit. It will throw your opponent up slighlty, which will allow you to combo them.

It also does heavy shield damage and can be used to break shields if an opponent uses them repeatedly.

Up special's hitbox is quite small, but can put opponents who are nearby you to sleep, which can set up for a combo into rest. The higher percentage your opponent is, the longer they will sleep, and it is not affected by mashing.

Jigglypuff is invulnerable for just one frame when down special begins, but if you are touching your opponent, you will deal an extremely powerful move with high knockback. After that, Jigglypuff is left very vulnerable, so it should be used as a combo finish to KO opponents. Learning how to KO with this move is an essential part of Jigglypuff's playstyle.

Jigglypuff's forward throw will send your opponent flying diagonally forward. Use it to throw your opponent off stage or gain stage control.

Down throw will also send your opponent flying diagonally forward. This is the highest damaging throw, although it doesn not combo, so use it when you are unsure which throw to toss out.

How to Unlock Jigglypuff

There are three ways to unlock Jigglypuff. Completing any of these, then defeating Jigglypuff when they appear in the “a New Challenger Appears” screen will allow you to use them afterward. 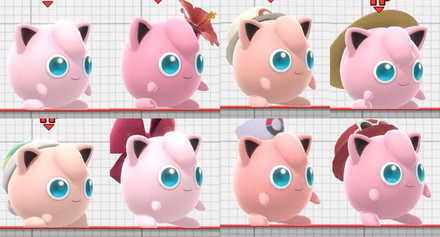 In order for us to make the best articles possible, share your corrections, opinions, and thoughts about 「Jigglypuff Guide: Matchup Chart and Combos | Super Smash Bros Ultimate」 with us!