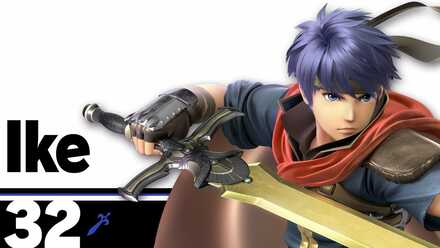 This is a guide to using Ike in Super Smash Bros. Ultimate. Ike's bread and butter combos, how to unlock, frame data, alt costumes and skins, as well as Ike's matchups, counters, and tier list placement can all be found here.

Smash Ultimate Ike is much stronger than his Smash 4 counterpart, with buffs to his mobility and frame data making him much better against a lot of the roster. His neutral air is a very powerful move with exceptional range, allowing him to combo into other moves to deal damage or take out his opponents. Additionally, several of his moves (up aerial, up special, smash attacks, etc) are great for taking out opponent stocks.

He has great horizontal recovery with his side special, but overall his recovery is still rather exploitable, meaning that he can struggle with getting back to the stage. All in all, Ike is a heavy hitting swordie that can deal tons of damage and take out opponents at rather low percents, but still has rather poor speed and frame data, which can make it difficult for him to battle with quicker characters.

1. -2 = Disadvantage. -1 = Slight Disadvantage or Even. 0 = Even. +1 = Slight Advantage or Even. +2 = Advantage.
2. The matchup chart was based around both the opinions of professional players of each character, as well as our own experience through playing Ike.
3. Characters within each tier are unordered
4. Pokemon Trainer's individual Pokemon (Squirtle, Ivysaur, and Charizard) as well as Echo fighters with no significant difference than their regular counterpart are not shown.
5. For other characters who are not shown here, we are still investigating the matchup.

Ike has considerable startup on his moves, so there isn't a lot he can do about safe shield pressure. In most cases, he will either want to go for a shield grab or up special. Grab is not very quick, and doesn't have the best range, so it is only good for very close opponents who didn't space their attack properly. While up special is rather slow, Ike will gain intangibility from frame 5, allowing him to tank through attacks and beat out the opponent's next attack, but since the move is so long, it can be punish if missed.

Most of Ike's moves have slower start up, but jab comes out quite fast, making it a great tool for close range combat.

Ike's dash attack is a very powerful attack that can KO opponents at the ledge. It comes out slow, but has great range and knockback, and can also be used to catch landings.

Ike's forward tilt has good damage, knockback, and range. It has very little hitboxes above and below it, so primarily use it for an opponent that is approaching from the ground.

Ike's up tilt has good range and is quite powerful. It cannot hit behind Ike at all, but it can cover approaching jumps, KO into neutral air, and it can KO at high percents.

Ike's down tilt comes out fast and can lead into combos. However, it has a limited range and will only hit a grounded opponent. It is Ike's fastest tilt attack, and is good for a quick whiff punish.

Ike's forward smash has a very wide range and stronge knockback. It comes out very slow and has a lot of end lag, but its knockback and hitbox make it a very effective tool if you have a read on your opponent's movement.

Ike's up smash, like forward smash, has very long startup and ending lag. However, it covers a very wide range, almost 180 degrees, and can be a great tool to punish get ups or rolls if timed correctly. It is also useful for catching foes on the platform above you, or foes trying to land.

Ike's down smash is a quick swipe of Ike's sword front and then back. The second hit behind Ike has stronger knockback, making it a good punish for rolling opponent. Although it has the quickest startup of Ike's specials, it is still very susceptible to a whiff punish if missed.

Ike's neutral air has excellent range, almost reaching 360 degrees around him. This makes nair easy to catch enemies dashing in or jumping towards Ike. It also has little landing lag. Use this to approach your opponents or keep them spaced away. Neutral Air is very safe on shield (-5), making it one of his main pressuring tools, and most useful tools in general.

Ike's forward air has great range and deals decent damage. Its range of motion is similar to nair, but it moves slightly faster, making it a great approach option in the air. A correctly spaced fair can be hard to punish out of shield.

Back Air is one of Ike's main KO tools. It comes out much faster than his smash attacks and can KO from decent percents. It is also safe on shield if properly spaced.

Ike's up air has good range and deals decent damage. Due to its wide upward range, it is very good for juggling opponents above you. It can also KO near the top at high percents.

Ike's down air has a meteor hitbox that can spike your opponent. It also has a very long downward range that can be used to punish opponents trying to grab the ledge if timed correctly.

Ike charges up and stabs his sword into the ground, causing an explosion that has a small AOE effect. The longer it is charged, the greater damage and knockback it will do. It has slow start up, but a hitbox above and below Ike, making it a good option for covering the ledge. It can also hit slightly below the stage, allowing you to 2 frame your opponent's recovery with the right timing.

Quick Draw is a very fast dash forward that can be used for horizontal recovery. The more it is charged, the greater damage it will do and length it will travel. After Quick Draw, Ike will go into helplessness, and be unable to use his up special, so be sure to charge enough to reach the ledge if off stage. This attack has a lot of end lag, making it very punishable when it hits an opponent's shield. However, its speed and distance can make it a good tool for traversing across the stage quickly.

Aether launches Ike's sword into the air and is followed by a spinning slam downward. It will move Ike slightly forward in the direction he is facing when the attack begins. When he first throws his sword up, he gains super armor. The slamming attack of his sword also has a meteor hitbox, and can result in a suicidal KO if opponents are careless when trying to edgeguard. If Ike's back is facing the ledge during Aether, he will not grab the ledge, so be very careful of which direction you are facing. At very low percents, Aether can connect from down throw for guarunteed damage.

A typical counter similar to other Fire Emblem characters. This can be used as a edgeguarding tool on characters with limited recoveries, as well as a way to black and counter a predictable attack.

Ike's forward throw will create distance from your opponent even at low percents, making it unable to combo into anything. It will mainly be used as a tool to throw your opponent offstage and gain stage control.

Ike's back throw should mainly be used to get your opponent off stage. While off stage, moves like Counter or Eruption can be used to block recoveries.

Ike's up throw can combo into fair, nair, or up air. However, due to greater end lag than down throw, it can be a bit harder to land them.

Ike's down throw lightly knocks your opponent into the air, making it great for comboing at low and mid percents. Down throw can lead into up special, up tilt, and up air. At very high percents, it can even KO an opponent.

How to Unlock Ike

There are three ways to unlock Ike. Completing any of these, then defeating Ike when they appear in the “a New Challenger Appears” screen will allow you to use them afterward. 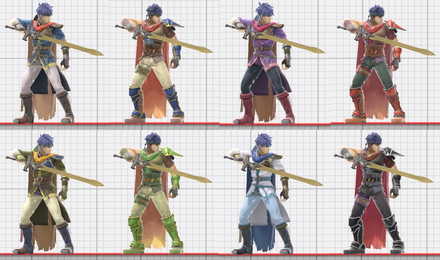 In order for us to make the best articles possible, share your corrections, opinions, and thoughts about 「Ike Guide: Matchup Chart and Combos | Super Smash Bros Ultimate」 with us!