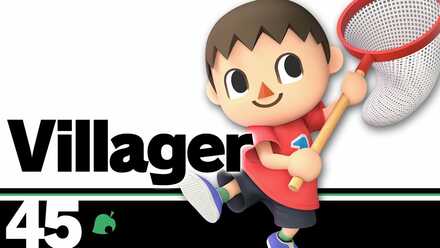 This is a guide to using Villager in Super Smash Bros. Ultimate. Villager's bread and butter combos, how to unlock, frame data, alt costumes and skins, as well as Villager's matchups, counters, and tier list placement can all be found here.

A unique character with many powerful projectiles

Smash Ultimate Villager has several projectiles, including his side special and forward aerial, which can be used to camp opponents and play a largely defensive game. His gameplan mainly revolves around using these projectiles to rack up damage, before finishing off opponents with a smash attack or spike. His edgeguarding ability is quite good, thanks to his forward smash, as well as his powerful recovery, which is one of the best in the game.

Villager's weaknesses mainly come in the form of a slow grab, somewhat light weight, and struggling to kill. While Villager's projectile game is quite potent, they sometimes struggle against opponents who can break their zoning and get in close. Villager's KOs can be a bit difficult to set up, so Villager players will need to be patient and wait for an opportunity to present itself.

1. -2 = Disadvantage. -1 = Slight Disadvantage or Even. 0 = Even. +1 = Slight Advantage or Even. +2 = Advantage.
2. The matchup chart was based around both the opinions of professional players of each character, as well as our own experience through playing Villager.
3. Characters within each tier are unordered
4. Pokemon Trainer's individual Pokemon (Squirtle, Ivysaur, and Charizard) as well as Echo fighters with no significant difference than their regular counterpart are not shown.
5. For other characters who are not shown here, we are still investigating the matchup.

Villager's best out of shield option is their neutral air, which comes out very quick, has a long lasting hitbox, and is very safe on shield itself. Other options are a bit more limited. If Villager has planted the tree already, they can jump and use down B in just 9 frames to hit forward with their axe. Up smash can be used to hit opponents above or directly in front of them, although it is not a super fast option. Lastly, if villager has pocketed a projectile, they can jump and throw it out in 12 frames, which is a pretty low committal option.

Villager's jab has a quck startup. It's mainly used as a close range get-off-me tool.

Villager's dash attack is great for its quick startup and long range. It's mainly used for catching landings or approach, but it is also a decent whiff punish out of a dash back. Since its hitbox can go below the ledge, it can also be used to two-frame opponents and prevent their recovery.

Villager's forward tilt has a fast startup. Thanks to its decent range, it is used as a spacing tool, and can be used to try and cover an opponent's ledge getup. It also works as a quick whiff punish.

Villager's up tilt similarly has a fast startup. The hitboxes are a little wider than they look, which can be utilized to your advantage as an anti-aerial.

Villager's down tilt deals good damage and knockback. The lower part of the hitbox allows you to hit an opponent through the ledge to prevent their recovery.

Villager's forward smash deals strong damage and knockback. When used where there is no ground in front of them (such as at the ledge) Villager's bowling ball will fall downward. This makes the move a very powerful edgeguarding tool against opponents with recoveries that have to go below the stage.

Villager's up smash is very powerful, dealing great knockback. There is no hitbox behind Villager, so be mindful that it will only hit above and in front of them.

Villager's down smash has fast startup. It has weak knockback, but you can bury the opponent, which can set up for another attacks, like forward smash at higher percentages.

Villager's neutral air has very quick startup. It's mainly used as a close range get-off-me-tool, and as an out of shield option.

Villager's forward air has a long range. It's unique in being a projectile aerial attack. The closer you are to the opponent, the greater the damage and knockback. It is mostly used as a poking tool due to its short end lag, but it can be used to combo an opponent to the blast zone as well. Zoning with the slingshot as well as Villager's special attacks gives them a fairly powerful zoning playstyle.

Villager's back air is very similar to his forward air in terms of range, but in the other direction. The damage and knockback are stronger than that of the Fair, at the price of a slower startup. It can't be used for combos, but it can be used as a KO option. Generally forward air is used for poking and comboing, while back air is used to finish off an opponent's stock.

Villager's Uair has a quick startup. It's mainly used to juggle opponents in the air, and as a combo extender.

Additionally, the number of turnips Villager wields is randomly decided between 1-3. The more turnips, the higher the attack power.

Villager's down air can be used to meteor smash. The meteor hitbox is only present at the beginning of the move, but the later attack has horizontal knockback that can still be used to prevent an opponent's recovery.

Similar to up air, the number of turnips Villager wields is randomly decided between 1-3. The more turnips, the higher the attack power.

Villager pockets a nearby item or projectile for his netural special. Pocketed items can be taken out and thrown by pressing the special button again. The pocketed projectile will be returned with 1.9x the damage.

This move is very powerful in certain matchups, such as against Link or Diddy Kong, since he can pocket their items (Remote Bomb / Banana) and prevent them from making use of them for an entire stock, severely limiting thei neutral options.

Villager's side special summons Lloid and launches him horizontally. You can ride Lloid after launching by pressing and holding the special button, which will also increase Lloid's power. You can get off Lloid by pressing the button again, but doing so results Villager going into helplessness until he touches the ground.

Summoning Lloid forces your opponent to jump out of the way or shield, allowing Villager to control neutral. The opponent's jump can then be reliably countered with a Forward or Back aerial to KO in some cases, so use this special to bait out the opponent's actions and punish them.

Villager rises up with a balloon hat in his up special. Pressing and holding the special button will cause Villager to rise up higher, while pressing the normal attack button results in Villager detaching from the balloons and going into helplessness. Villager will also detach from the balloons automatically after a few seconds. The balloons can also be popped by attacks from opponents. Note that if the special is immediately repeated and the helium hasn't been recharged, Villager will only have one balloon, and they won't be able to travel as far.

Villager plants and grows trees in his down special. The special is divided into three stages, and pressing down special will have a different effect at each point.

The first use of the special plants a seed in the ground. The move fails if its triggered in the air.

The second use allows you to water the seed. This makes the seeds rapidly grow into a tree. When the tree pops out of the ground, it delivers a attack with strong knockback. You could use this to try and catch an opponent getting up at the ledge.

The third use allows you to use an axe to cut the tree. Slashing twice from the same direction will cause the tree to fall, damaging your opponent when it falls. This can also be used on an opponent getting up at the ledge. You can also swing the axe anywhere, regardless of how far you are from the tree. Attacking with the axe has a large endlag, but it has quick startup, as well as good damage and knockback

Villager throws their opponent forward. It can't be used as a combo, so use it when you want to get your opponent off the stage.

Villager throws their opponent backward. It can't be used for combos, but it has a strong knockback, so you can throw the opponent from the edge for a reliable KO at higher percents.

Villager throws their opponent upward. It can't be used for combos, but it can be used to juggle, so use it against opponents with a poor disadvantage state.

Villager slams their opponent to the ground and knocks them upward. It can be comboed into a forward air, so it's good for racking up damage.

How to Unlock Villager

There are three ways to unlock Villager. Completing any of these, then defeating Villager when they appear in the “a New Challenger Appears” screen will allow you to use them afterward. 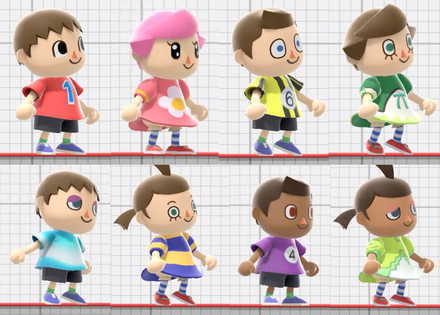 In order for us to make the best articles possible, share your corrections, opinions, and thoughts about 「Villager Guide: Matchup Chart and Combos | Super Smash Bros Ultimate」 with us!