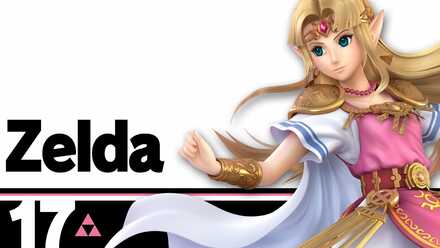 This is a guide to using Zelda in Super Smash Bros. Ultimate. Zelda's bread and butter combos, how to unlock, frame data, alt costumes and skins, as well as Zelda's matchups, counters, and tier list placement can all be found here.

A zoner with some hard hitting moves

Her weakness mainly lies in her relatively slow frame data, which makes it tough for her to punish quicker characters. She relies heavily on her Down B other specials to zone out opponents and play from a safe distance.

1. -2 = Disadvantage. -1 = Slight Disadvantage or Even. 0 = Even. +1 = Slight Advantage or Even. +2 = Advantage.
2. The matchup chart was based around both the opinions of professional players of each character, as well as our own experience through playing Zelda.
3. Characters within each tier are unordered
4. Pokemon Trainer's individual Pokemon (Squirtle, Ivysaur, and Charizard) as well as Echo fighters with no significant difference than their regular counterpart are not shown.
5. For other characters who are not shown here, we are still investigating the matchup.

Zelda has pretty good out of shield game, with most of her aerials coming out in 9 frames, as well as Up B, which comes out in 6 frames, and can KO. For opponents at higher percents, use Up B out of shield and continue holding up to carry them upward for a KO. Only use this on unsafe moves though, because it leaves Zelda extremely punishable if whiffed.

Both forward and back air can also KO if sweet spotted, making them good out of shield punishes as well. Jumping into neutral B is another option, as intangibility will actually come out on frame 7, allowing her to avoid taking damage from an opponent's followup attack.

Zelda's jab is very quick, making it good for a fast whiff punish, or as a get-off-me tool. It has a rapid jab, which loops until the finisher, and can even KO at higher percents.

Zelda's dash attack is extremely fast, making it good for whiff punishing or catching landings. In some cases, it can even KO.

Zelda's forward tilt has great range, and can be used to poke at opponent from a distance. Its startup is somewhat slow, but it has considerable knockback if the sweetspot hits.

Zelda's up tilt has quick startup, and hits an area above her head, going from her front to her back. It is mostly useful as an anti-air, but its low endlag also makes it useful as a combo starter.

Zelda's down tilt is her fastest tilt, and is great for poking at her opponents. From about 30%, it will send opponents upward enough to combo into a forward air.

Zelda's forward smash has great range, and deals good damage and knockback. It has a long lasting hitbox, making it good for catching jumpy opponents, and for ledgetrapping. When spaced properly, it is safe on shield, and can be difficult to punish.

Zelda's up smash comes out quick, and deals good damage and knockback. It is used as an anti-air for catching an opponent's aerial approach.

Zelda's down smash is extremely quick, with only 5 frames of startup. It hits on both sides of Zelds, making it good for catching rolls, or as a get-off-me tool. It has relatively low end lag, so it can be hard to punish.

Neutral air is quick, and hits on both sides of Zelda. If fast falled, it can be used as a combo starter. Beware that opponents may sometimes fall out of the multi-hits and counter with an attack. It is -10/-9 on shield, so it must be spaced properly to avoid a punish.

Zelda's forward air is one of her KO tools, as it comes out quick and has a sweetspot on the tip that can KO at pretty early percents. The sweetspot is only active for a single frame, and instead hitting with the sourspot will barely cause the opponent to flinch, allowing them to counterattack in most cases. It is a bit of a risky option, but very rewarding if spaced correctly, and can even be used out of shield.

Zelda's Back air is essentially the same as her forward air, although it hits in the opposite direction, and is slightly stronger.

Zelda's up air is a powerful move that sends opponents upward. From about 100%, it can be comboed from down throw for a KO confirm.

Zelda's down air hits below her, and has a meteor hitbox. The startup hitbox is very powerful, but the late hitboxes are quite weak. It can be used for an offstage KO, although Zelda has less risky options she can use for edgeguarding.

Zelda's neutral special envelops her in crystals, is intangible from frame 4, and has a hitbox from frame 11. It can reflect projectiles, and is a great tool for getting out of disadvantage thanks to its intangibility and long lasting hitbox. It does have rather short range and long endlag, so be careful not to overuse it.

Zelda's side special sends a ball of fire forward, which will detonate and deal damage and knock back and opponent. Holding the special button allows you to send it further, and it can be steered with up and down. Once the special button is released, the explosion will detonate. It is mostly used for edgeguarding, as it is a low risk option Zelda can use from almost anywhere.

Zelda's up special allows her to teleport in a gust of wind. By holding the stick in a direction, you can alter where Zelda reappears, and holding it diagonally down in either direction allows her to travel shorter distances horizontally. The teleporting and reappearing animations both have a hitbox on them, and can be used to KO opponents at higher percents. Thanks to its fast startup, it is a great out of shield punish, and by holding up after teleporting, it can lead to a KO. Beware that it is unsafe on shield, and has noticeable endlag, so it is punishable if you land too close to an opponent or whiff the move.

An essential part to Zelda's gameplay, her down special summons a phantom knight who will strike ahead of her. By pressing B at any point in summoning the phanom, it will lunge forward even if incomplete, and by waiting until the end, the phantom that spawns will become more powerful. If Zelda is attacked while summoning the phantom, it will break, so it is important to use it when you are safe from the opponent. The phantom also functions as a projectile, so it can be reflected, but Zelda can counter this with her neutral special.

Zelda's forward throw sends an opponent forward. It does not combo into anything and cannot be used to KO, so it is instead used to gain stage control or put an opponent off stage.

Zelda's back throw also does not combo, but when used near the ledge, it can KO opponents at around 100%.

Zelda's down throw sends an opponent upward, and can combo into her aerials such as back air or up air for a KO.

How to Unlock Zelda

There are three ways to unlock Zelda. Completing any of these, then defeating Zelda when they appear in the “a New Challenger Appears” screen will allow you to use them afterward. 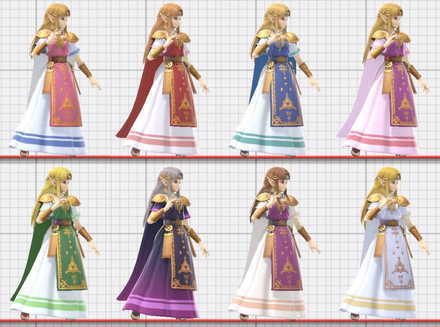 In order for us to make the best articles possible, share your corrections, opinions, and thoughts about 「Zelda Guide: Matchup Chart and Combos | Super Smash Bros Ultimate」 with us!