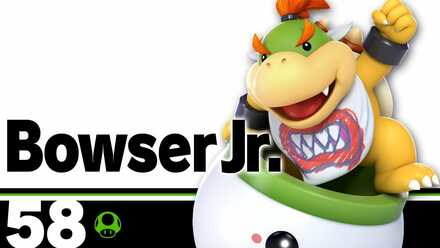 This is a guide to using Bowser Jr. in Super Smash Bros. Ultimate. Bowser Jr.'s bread and butter combos, how to unlock, frame data, alt costumes and skins, as well as Bowser Jr.'s matchups, counters, and tier list placement can all be found here.

Smash Ultimate Bowser Jr. (as well as his alts, Larry, Roy, Wendy, Iggy, Morton, Lemmy, and Ludwig) has the unique property of having two separate hurtboxesーone on his Clown Car, which will take less damage from incoming attacks, and one on his head/body, which takes more damage from incoming attacks. He has projectiles in B and Side B, as well as a few powerful and long lasting aerials (down aerial and forward aerial). His unique moveset allows him to use his projectiles to control the stage and then dash in with his down special for quick damage. Several of his movesーincluding all of his smashes and his rapid jabーare good for KOing.

Bowser Jr.'s largest weakness is the fact that he is easy to recover offstage. He also has a poor damage state, and gets comboed / juggled easily. Characters with superior range, such as swordies, will be trouble for him, as his attacks are somewhat lacking in that department. Lastly, he takes more damage when attacks hit his head / body instead of his car, so characters with good aerials will be a bit difficult to combat.

1. -2 = Disadvantage. -1 = Slight Disadvantage or Even. 0 = Even. +1 = Slight Advantage or Even. +2 = Advantage.
2. The matchup chart was based around both the opinions of professional players of each character, as well as our own experience through playing Bowser Jr..
3. Characters within each tier are unordered
4. Pokemon Trainer's individual Pokemon (Squirtle, Ivysaur, and Charizard) as well as Echo fighters with no significant difference than their regular counterpart are not shown.
5. For other characters who are not shown here, we are still investigating the matchup.

Do 2 up tilt attacks until your opponent gets launched, then jump after them and finish with two up air attacks. This combo works from 20% to 40%.

Start by descending onto your opponent with a down air attack, then dash towards them right away and finish with a Dash Attack. This combo works from 0% to 20%.

This combo starts with a side special charging into the enemy. Once you make contact, jump and do a down air. Once they bounce off the ground, jump to follow them and follow up with a forward or back air. This combo confirms from 0% to 30%.

This combo starts similar to the last one, with a side special charging into the enemy. Once you hit your opponent, jump and perform two up airs to juggle your opponent in the air.

Perform an up throw then jump up and follow them. and then follow up with two up airs. This combo works from 0% to 50%.

Start by jumping and doing a neutral air as you fall to the ground. Follow it up with two up tilt attacks. When the enemy is launched, connect an up air and finish them off with a back air. This combo confirms from 10%-40%.

Do this combo by jumping and performing a neutral air as you fall to the ground and then grabbing your opponent and performing an up throw. Jump back to pursue them and follow up with two or three up air attacks. This combo confirms from 0%-50%.

Bowser's grab is very slow, and not an ideal shield punish, so it only be used against very laggy moves.

Bowser Jr.'s Jab can typically be used as a get-off-me attack at close range, but the rapid jab also has decent knockback and can even be used at the ledge as a kill option at high percents.

Bowser Jr.'s dash attack has quick startup, but the attack's charge speed is slow, making it somewhat easy to read and avoid. It can also cross up shields, though, making it good as a mixup, and its lingering hitbox can be used to punish landings.

Bowser Jr.'s forward tilt has weak knockback, but it you can use this to set up a jab lock on your opponent. It has decent range, and can be shifted up or down.

Bowser Jr.'s up tilt has a short range and low knockback, but can combo into more up tilts or other moves, so it is mainly used as a combo tool.

Bowser Jr.'s down tilt's multiple hits can be used for a variety of things, including interrupting rushdowns, setting up fro a dash attack, and edgeguarding. It has a long-lasting hitbox, but can be punished on shield.

Bowser Jr.'s forward smash has high damage and knockback. The drills also stay out a long time, making it easy to catch enemies getting up from the ledge with its lingering hitbox. It has little lag for a smash attack, making it difficult to punish on shield.

Bowser Jr.'s up smash has great startup and knockback. However, it has poor horizontal range, so it is typically only useful as an anti-air. Its quick startup does make it a decent out of shield option, especially against an opponent attacking from the air.

Bowser Jr.'s down smash can cause heavy shield damage, breaking a shield with two fully charged hits. It is Bowser Jr.'s strongest smash attack, and will deal massive knockback if landed, but it has heavy endlag, so whiffing it will lead to a punish.

Bowser Jr.'s neutral air comes out quickly and has a hitbox on the front and back of Bowser Jr. which makes it a good get-off-me tool. Its long hitbox makes it a good move for edgeguarding opponents. This move is safe on shield with proper spacing.

Bowser Jr.'s forward air has a lingering hitbox, which can catch opponents who drop shield. If you use rising fair (pressing jump and A+Forward at the same time), it will have less endlag, and be better for poking at opponents. You can also make use of its long hitbox to edgeguard when your opponent is off the stage.

Back Air is Bowser Jr.'s safest kill move, thanks to its good damage and knockback. Rack up damage with Bowser Jr.'s specials, and use this move to finish them off.

Down Air has a useful lingering hitbox, but it has poor horizontal range, which makes it somewhat easy to dodge. If you manage to hit your opponent, this attack can combo into other moves.

Neutral special fires a cannonball. The longer you hold the special button, the stronger and faster the cannonball will become. When the cannonball falls from the air, it creates a seperate hitbox that can hit opponents under the ledge.

Side special turns Bowser Jr.'s clown car into a cart. If you push the control stick forward, speed will be increased, and if you push it back, the cart will perform a strong donut move. The donut attack has higher damage and knockback, but greater endlag as well.

You can also jump cancel this move, allowing you to get a jump in the air without wasting your double jump. This essentially gives Bowser Jr. a second double jump, which makes edgeguarding and recovering much easier.

Up special has Bowser Jr. eject from his car and shoot into the air. The car will fall below and cause a strong explosion, making it useful for edgeguarding

After he ejects, Bowser Jr. is able to air dodge or attack foes with a hammer which comes out fast, deals good damage, and can kill at high percents. However, this move does has long landing lag, so watch out for opponents trying to catch you as you land back on the stage.

Down special sends out Mechakoopa, a walking robot that explodes upon contact. It can also be thrown like an item if picked up. If a walking Mechakoopa is shielded, it will drop to the ground, allowing your opponent to pick it up and throw it as well. If it is allowed to walk around, it will explode after some time. This explosion will also harm Bowser Jr.

This attack's start up frames are slow, but it can be used to limit your opponent's movement, making it one of Bowser Jr.'s main neutral tools.

Forward throw cannot be used to combo, so use it to throw your opponent off stage. It is also Bowser Jr.'s most powerful throw and can KO around 150%.

Back throw cannot be used for combos, but it can kill by the ledge at high percents.

Up throw can combo into up air at low percents and is a good throw to rack up damage.

Down throw does not combo, but it does deal decent damage and can send your opponent offstage to set up for an edgeguard.

How to Unlock Bowser Jr.

There are three ways to unlock Bowser Jr.. Completing any of these, then defeating Bowser Jr. when they appear in the “a New Challenger Appears” screen will allow you to use them afterward. 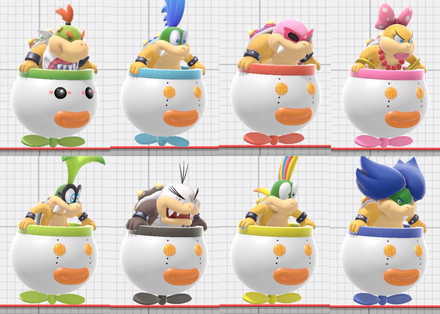 In order for us to make the best articles possible, share your corrections, opinions, and thoughts about 「Bowser Jr. Guide: Matchup Chart and Combos | Super Smash Bros Ultimate」 with us!