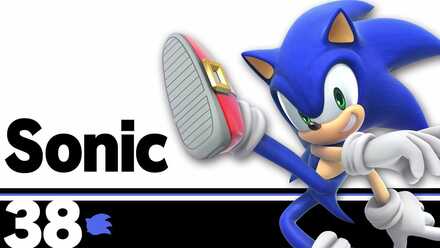 This is a guide to using Sonic in Super Smash Bros. Ultimate. Sonic's bread and butter combos, how to unlock, frame data, alt costumes and skins, as well as Sonic's matchups, counters, and tier list placement can all be found here.

Smash Ultimate Sonic is as fast as he's ever been, boasting the highest dash speed in the game, which allows him to weave in and out of opponents' range. This amazing mobility allows him to dodge enemy attacks before running in for a whiff punish. Sonic's specials also allow for a versatile style of play, as Sonic can play both defensively and aggressively.

Sonic's main weaknesses are his lack of kill power, meaning that he will often have to rely on edgeguarding. He also lacks any kind of projectile, so he struggles a bit with range, although his incredible speed does allow him to move out of harm's way.

1. -2 = Disadvantage. -1 = Slight Disadvantage or Even. 0 = Even. +1 = Slight Advantage or Even. +2 = Advantage.
2. The matchup chart was based around both the opinions of professional players of each character, as well as our own experience through playing Sonic.
3. Characters within each tier are unordered
4. Pokemon Trainer's individual Pokemon (Squirtle, Ivysaur, and Charizard) as well as Echo fighters with no significant difference than their regular counterpart are not shown.
5. For other characters who are not shown here, we are still investigating the matchup.

Sonic has decent out of shield game, with several options coming out in under 10 frames. He can use up B while grounded for a very quick escape, although this does not have a hitbox, so it can only be used to get away from an opponent. Jumping before using the move will actually drop the spring below him, which can hurt opponents. However, forward aerial is a much better offensive option, coming out in just 8 frames. Its range allows Sonic to hit opponents somewhat far away, and it is a great tool for spacing. Neutral air is almost just as fast, and also has a long lasting hitbox that covers Sonic's body, so it can allow for follow-ups if landed.

Jab is one of Sonic's fastest attacks, and it works well as a get-off-me attack for close range, and it can also be used to jab lock opponents.

Sonic's dash attack has fast startup and covers a lot of distance, and will cross up shields, making it a great approach tool. It can be comboed into from a down throw.

Sonic's forward tilt has good range and fast start up. The angle can also be shifted up or down to hit opponents in the air or close to the ground. Its quick startup and range make it a good move for a whiff punish from a dash.

Sonic's up tilt comes out fast and deals multiple hits. It has short range in the front, but it can be used to catch opponents jumping in at close range.

Sonic's down tilt also comes out fast, but it has less range than forward tilt. However, it also has less end lag which makes it harder to punish. It can lead into combos with Sonic's aerials.

Sonic's forward smash has great range and knockback. Most of Sonic's moves have weak knockback, so aside from edgeguarding, Sonic will rely on forward smash for KOs.

Up smash has a lingering hitbox that does up to 8 attacks, with the last attack having high knockback. While this attack has slow start up and punishable ending lag, its lingering hitbox can make it a good tool for covering an opponent's get up options from the ledge.

Down smash is the fastest of all of Sonic's smash attacks. It also covers both the front and back of Sonic, making it a good option for punishing your opponent's get up option or rolls.

Sonic's neutral air comes out fast and has a small range. However, Sonic's entire body will become a hitbox, making nair a great get-off-me attack in the air. Nair can follow up most of Sonic's specials and lead into combos of its own. When properly spaced, it is also safe on shield.

Sonic's forward air comes out fast and has multiple hitboxes which can catch opponents dropping shield. It has good knockback, and is very powerful offstage for edgeguarding opponents.

Sonic's back air has good knockbac,k and is a great tool to get your opponent off stage. While it has less knockback than forward smash, it makes up for it with better start up and lower end lag. It also has great range, making it not only a KO option but also a good poking tool.

Sonic's up air comes out fast and is used for juggling opponents. Its hitboxes on the sides make it great for catching opponents in the air. At high percents, combine it with Sonic's up special to reach opponents up high and finish them off.

Sonic's down air is a very fast falling kick to the ground at a diagonal angle. The clean hit of this move also has a meteor effect. It has less end lag compared to similar moves, making it possible to use off stage against opponents trying to recover. The attack has a lot of landing lag, but if thrown out from high up, you can reduce its landing lag by cancelling the animation.

Sonic's neutral special is his homing attack. It can be charged to deal more damage and will attack the nearest opponent. The button can also be pressed again to attack earlier and deal less damage. When your opponent is not in range, Sonic will slam into the ground at an angle. The early hit of this attack can combo into various attacks.

Sonic's side special will spin and charge at the opponent. If you hold down the button longer, damage and speed will increase. The beginning of the charge grants intangibility on the ground. While charging, you can press jump to jump into the air and cancel with any move besides side and down special.

Up special has great vertical recovery and can also be used to damage oppoenents. When used in the air, a spring will fall down and damage any opponents it hits. Using up special while above and off stage opponent can be a very effective tool to edgeguard. Sonic can also attack or dodge after jumping off of the spring, which allow him to connect aerial combos at higher percents. When used on the ground, the spring stays in place for a bit, allowing Sonic or any other character to use the spring as well.

Spin charge is a charging move that can be increased by mashing the button repeatedly. Unlike side special, down special does not have invulnerability frames at the start, cannot be canceled with a jump or another move, and does not jump into the air at the start.

Sonic's forward throw is used for putting an opponent off the stage or gaining stage control. Even at low percents, this throw will create distance from your opponent, making it impossible to combo into anything.

Back throw has Sonic flip backwards and toss the opponent behind him. It cannot be used for combos, but it can KO at the ledge when an opponent reaches high percents.

Up throw will throw your opponent straight up into the air. It is easy to connect up airs with this throw.

Down throw will throw opponents into the air slightly. This throw is a semi-spike, which makes it useful for setting up edgeguards if used by the ledge.

How to Unlock Sonic

There are three ways to unlock Sonic. Completing any of these, then defeating Sonic when they appear in the “a New Challenger Appears” screen will allow you to use them afterward. 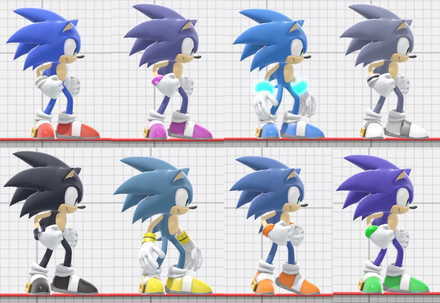 Register as a member and get all the information you want. (It's free!)
Login
Opinions about an article or post go here.
Opinions about an article or post
We at Game8 thank you for your support.
In order for us to make the best articles possible, share your corrections, opinions, and thoughts about "Sonic Guide: Matchup Chart and Combos" with us!
When reporting a problem, please be as specific as possible in providing details such as what conditions the problem occurred under and what kind of effects it had.