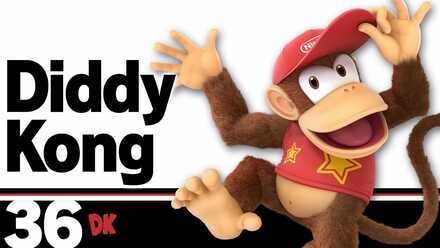 This is a guide to using Diddy Kong in Super Smash Bros. Ultimate. Diddy Kong's bread and butter combos, how to unlock, frame data, alt costumes and skins, as well as Diddy Kong's matchups, counters, and tier list placement can all be found here.

Limits opponent's options to rack up damage via combos

While not as prominent as in Smash 4, Smash Ultimate Diddy Kong has a variety of options, such as Banana (Down Special), Peanut Popgun (Neutral B), and Monkey Flip (Side B), which can be used to control neutral. These options can be used to limit opponents' options in order to bait them into a situation where Diddy can punish them. Good mobility and frame data also allow him to utilize a variety of combos.

Diddy's main kills moves are his smash attacks, which are easy to land when used after hitting the opponent with a banana. He can also use aerials such as the meteor hitbox of Down Aerial, or Bair, though they don't kill until high percents. Therefore, Diddy Kong does struggle to kill a bit. Additionally, his recovery is rather poor, so he has a hard time recovering from offstage, although his Side Special can help.

1. -2 = Disadvantage. -1 = Slight Disadvantage or Even. 0 = Even. +1 = Slight Advantage or Even. +2 = Advantage.
2. The matchup chart was based around both the opinions of professional players of each character, as well as our own experience through playing Diddy Kong.
3. Characters within each tier are unordered
4. Pokemon Trainer's individual Pokemon (Squirtle, Ivysaur, and Charizard) as well as Echo fighters with no significant difference than their regular counterpart are not shown.
5. For other characters who are not shown here, we are still investigating the matchup.

Diddy Kong's frame data, combined with the use of his held item (banana) gives him great out of shield options. His up smash is extremely quick, making it a very good option for an out of shield punish on opponents close to or above Diddy. When shields while holding banana, he has a number of quick and low commitment options he can use out of shield. Notably, jumping and using a z-dropped banana takes only 4 frames, and will lead into a down air or smash attack. He can also throw the banana forward or backward, which is great for hitting opponents from a distance. Lastly, his aerials also work pretty well out of shield, in the event that you do not have a banana in hand.

Diddy Kong's jab has a quick startup but short range, so it's primarily used as a get-off-me tool at short range, which is great as a landing tool. Unlike previous games, Diddy no longer has a rapid jab portion using hs tail.

Diddy Kong's dash attack has a quick startup, long duration, and short cooldown, which all make it a good attack to find an opening, and overall one of his best neutral tools. The move itself launches opponents into the air, which you can follow up with an aerial, such as up air, neutral air, or forward air.

Diddy Kong's forward tilt has a quick startup and the largest range of all of Diddy Kong's attacks. It's lengthy cooldown makes the difficult to use as a poking tool, but it is quite powerful, and can be used to hit opponents near the ledge.

Diddy Kong's up tilt has a quick startup. The wide attack range covers Diddy Kong's rear, so it's also primarily used as a short range get-off-me tool, and can also combo into Diddy's aerials.

Diddy Kong's down tilt has a quick startup. It doesn't have the best range, but it's low endlag makes it useful as a poking tool. By running at the opponent after using down tilt, it can easily combo into itself at most percents, as well as an up smash at higher percentages for a KO confirm.

Diddy Kong's forward smash is an attack great for its damage, range, and knockback. It's one of Diddy Kong's attacks with the strongest KO power, and is the go-to follow up to use after throwing tripping a standing opponent with a banana. However, it runs the risk of being punishable when whiffed or used on shield, so it isn't used much outside of banana throw → forward smash.

Diddy Kong's up smash has a extremely quick startup. However, its speed doesn't totally make up for its weakness, since it only starts to KO around 140%. It can be used to catch landings, as an out of shield option, or as a quick whiff punish. It can be comboed into from down tilt as well.

Diddy Kong's down smash has a quick startup. As with up smash, be mindful of its weakness in KO power. The attack can be used to catch rolls or knock opponents off stage to set up for an edgeguard.

Diddy Kong's neutral air has quick startup. The attack launches the opponent into the air, which can connect to a variety of aerial combos. Its long lasting hitbox makes it great as a combo starter, as fastfalling with it onto an opponent will put them in the air and allow for a follow up.

Diddy Kong's forward air is very fast attack. Pressing A+forward together with jump will allow you to use it while rising, which also decreases its ending lag. Its long range makes it a good poking tool.

Diddy Kong's back air has a quick startup. It also has a short duration, allowing it to combo into itself on mid-air opponents. It is also a decent KO move, and can also be used offstage for an edgeguard.

Diddy Kong's up air has a quick startup. The range isn't great, but its quick startup makes it a great combo extender and juggling tool.

Diddy Kong's down air has a meteor hitbox. You can use this move for offstage KOs, but it is somewhat high risk/high reward, as it's difficult to hit due to its slow speed and short range. One useful application of down air is comboing into it from a Z-Dropped banana.

Diddy Kong's fires a peanut from his popgun in his neutral special. The power and speed are increased when the special button is held longer before releasing. However, charging too much will result in an explosion, stunning him but also knocking back opponents within range. The fully charged explosion is perhaps Diddy Kong's best shield break punish.

Additionally, peanuts can be caught and thrown as an item. It is better to avoid having your opponents catch the peanuts, so mix up your charges to throw them off. Lastly, using it while in disadvantage allows Diddy to mix up his movement if a B-reverse is used, which can be used after a monkey flip.

In his side special, Diddy Kong does a backflip, then grabs or attacks his opponent. After grabbing your opponent, use the Jump button to stomp on your opponent or use the Attack button to knock them back. Since this move is a command grab, it will grab shielded opponents, so it is great to use with a banana in hand, since opponents will often shield out of fear of getting hit with it.

After initiating the flip, you can press the special button again to make Diddy let out a powerful kick. The flying kick does strong damage and has high KO potential, especially if the opponent is near the ledge. Be careful, however, for he will not be able to use up special until he touches the ground again, so when recovering, you should not press B a second time durning monkey flip.

Diddy Kong flies with his rocketbarrel in his up special. The direction of flight can be controlled, while the duration of flight can be increased by charging. Crashing into something or being hit will cause Diddy Kong to fall, unable to move, so be careful not to hit the under section of the stage with it, or Diddy will fall to his doom.

You can still, however, use the rocket barrel to your advantage after being shot down. You have some control over it and you can aim for it to crash and explode on to your opponent, by holding the control stick. While the barrel's movement is somewhat random, holding right on the control stick can steer it down to the ground, which can sometimes get a KO if it explodes on the opponent.

While somewhat hard to use, up special can be used as a combo tool from the grounf as well. Hitting an opponent with the startup of the move, and then steering it hard left or hard right toward the ground will lead to a strong two hit combo that results in an explosion that damages both Diddy and the opponent.

Diddy Kong throws a Banana Peel onto the stage for his down special. Only one banana peel can be in play at a time on the stage. A banana peel will disappear only when an opponent slips on it or if it's thrown twice.

After using the move to throw out the banana peel, it can be picked up mid air via an aerial, or from the ground via a tilt, jab, or dash attack, which will allow Diddy to use it as a throwing Item. Careful execution of the banana peel is crucial to Diddy's gameplan. It can be thrown directly at an opponent on the ground for a smash attack or combo, z-dropped from the air to lead into a down air or other aerial, or simply placed on the stage to limit the opponent's movement. However, if the opponent picks up the peel and throws it, it will be in their possession, and can be used against Diddy, so try and avoid letting them gain control.

Diddy Kong throws his opponent forward. While limited to low percentages, it can sometimes combo into Dash Attack.

Diddy Kong throws and knocks back his opponent behind him. It's not usually used for combos and is more for throwing your opponent off the stage or gaining stage control. At high percents, it can KO an opponent if used near the ledge.

Diddy Kong tosses his opponent upward, which you can then follow up with any aerial attack besides down air.

Diddy Kong throws his opponent down to the ground, knocking them up into the air and allowing for follow ups. You can build up damage by connecting this into back air or his other aerials, making it one of his main combo starters.

How to Unlock Diddy Kong

There are three ways to unlock Diddy Kong. Completing any of these, then defeating Diddy Kong when they appear in the “a New Challenger Appears” screen will allow you to use them afterward. 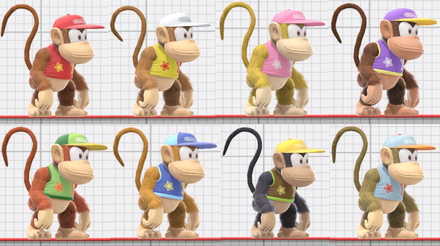 In order for us to make the best articles possible, share your corrections, opinions, and thoughts about 「Diddy Kong Guide: Matchup Chart and Combos | Super Smash Bros Ultimate」 with us!