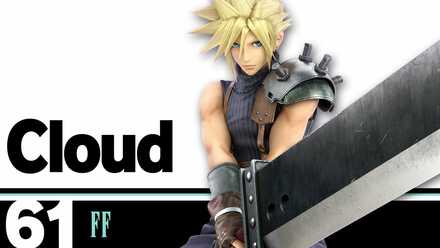 This is a guide to using Cloud in Super Smash Bros. Ultimate. Cloud's bread and butter combos, how to unlock, frame data, alt costumes and skins, as well as Cloud's matchups, counters, and tier list placement can all be found here.

A powerful swordie with amazing range

Smash Ultimate Cloud boasts excellent range, good mobility, and powerful moves. His aerials and limit specials are good for KOs, giving him a few options to finish off his opponents. His Buster Sword gives him some of the best range of all swordies, and he has a projectile, unlike most sword characters. He also has Climhazard (Up Special), which is a very good move out of shield, coming out in just 7 frames, and capable of KOing at higher percents.

In Smash Ultimate, Cloud's limit ability only lasts 15 seconds when charged, so it is important to use it before you lose it. However, Cloud relies on this mechanic for KOing, so opponents can exploit it by getting Cloud off stage and forcing him to use it for recovering. Without limit, his recovery is very poor, so he is susceptible to edgeguards. Additionally, Cloud has poor grab game and somewhat punishable moves, meaning that opponents need to take a very defensive approach when playing against him to exploit these weaknesses.

1. -2 = Disadvantage. -1 = Slight Disadvantage or Even. 0 = Even. +1 = Slight Advantage or Even. +2 = Advantage.
2. The matchup chart was based around both the opinions of professional players of each character, as well as our own experience through playing Cloud.
3. Characters within each tier are unordered
4. Pokemon Trainer's individual Pokemon (Squirtle, Ivysaur, and Charizard) as well as Echo fighters with no significant difference than their regular counterpart are not shown.
5. For other characters who are not shown here, we are still investigating the matchup.

Neutral air does less damage than up air, but can be connected at wider percents.

If you land down tilt as it is ending, the combo will not connect, so make sure to use this combo with the early hit of down tilt.

This combo works when your opponent has a bit of damage already (20% to 60%). Dash Attack will send your opponnent flying, so this can lead into a good opportunity to exploit their landing or recovery.

This combo can land with either the front or back hit of neutral air. This is the strongest neutral air combo.

This combo is one of the weakest neutral air combos, but it is a reliable combo that is easy to connect in early percents.

This combo will not connect with the back hit of neutral air. Also, if you miss this combo, there is a large opening so be careful.

Fair→Jab Combo (Down Smash, Side Special)

If you can land forward air while close to your opponent, the next attack will connect easier.

Cloud has great out of shield game, primarily thanks to his up special and neutral air. Up special will be his go-to out of shield option, as it comes out very fast, has great range, and can be hard to punish if using the second hit to land. Neutral air is another quick and less committal option that can be used to pressure an opponent, and its wide range makes it very easy to hit.

Cloud's jab has quick startup. Many of Cloud's attacks are prone to slow startup, so jab is useful as a get-off-me tool while grounded.

Cloud's dash attack deals two strong hits. It has a wide range, making it excellent for catching landings. It is also capable of KOing options with the sweetspot.

Cloud's forward tilt knocks the oppoent forward. It has a slow startup and short range, so it is mainly used out of an initial dash back from the opponent.

Cloud's up tilt has a wide upper range. The hitbox reaches behind Cloud, so you can use it as a get-off-me tool after landing. However, note that the back hitbox won't reach short characters such as Ness.

Cloud's down tilt is a slide attack, which keeps Cloud very close to the ground. You can dodge projectiles or aerial attacks by going under them with the attack. The attack primarily benefits Cloud for both approaching and repositioning.

Cloud's forward smash has great range and knockback. It has a slow startup, but since there are two lingering hitboxes, you can use it effectively out of a dash back or right up against the ledge to try and cover a getup option.

Cloud's up smash has a wide range. The move doesn’t have a hitbox behind Cloud, so it’s better for reading a jump or using as an anti-aerial than it is for punishing a move out of shield.

Cloud's down smash has a quick startup. It knocks back opponents in front of and behind Cloud, so by turning away from the ledge and using it, you can possibly KO an opponent trying to roll in. It's also great for catching an opponent’s roll.

Cloud's neutral air has a quick startup and great range. The hitbox this move generates behind Cloud is a convenient way to attack opponents behind him. Overall, it's great for pressuring an opponent and as a get-off-me tool, but keep in mind you will not hit short opponents standing on the ground if you use a rising aerial via Jump + Attack.

Cloud's forward air is great for range, damage, and knockback. It can act as both a combo starter and a KO option, since it can meteor smash opponents both on and off stage. Because of its slow startup, its important to keep its spacing in mind.

Cloud's back air has quick startup, as well as great damage and knockback. Its quick startup makes it great for spacing opponents who try to approach out. It is very safe on shield (-3), and it's also used as a KO move due to its strong knockback.

Cloud's up air thrusts his sword upwards parallel to the ground, covering a wide area on both sides of Cloud's head. While its knockback is a bit lacking, it is a quick move with great range and a disjointed hitbox, making it excellent for juggling opponents in disadvantage.

Cloud's down air covers a long downward range. It has can meteor smash, which makes it a powerful edgeguarding tool. Cloud has poor recovery though, so be careful not to SD and lose your own stock in the process.

Cloud fires a crescent-shaped energy beam in his neutral special. Due to its slow startup, it can be beaten out by a fast opponent or an opponent's projectiles. The special also forces opponents to jump or shield, which can open a window for you to hit them in air with a forward air.

When used after gaining Limit Break, the attack will have multi-staged hits and significantly increased knockback. It can KO even from a long distance, unless activated mid-air. An effective application is to throw out a forward air to force the opponent to dodge backward, and then use the Blade Beam to deal damage.

Cloud's Cross Slash has excellent range and damage output. If you press the special again after landing the first hit, it will be connected to the second and third hits. The side special will connect even if the opponent tries to use an out of shield option to break the combo, so mix up hitting twice the opponents shield and dashing away with hitting twice and delaying the third hit to bait and punish and out of shield option.

When used with Limit Break, all five hits are released at once, regardless of whether or not the first hit connects. Cloud gains brief intangibility before performing the attack. Damage and knockback are also increased for Limit Break, but be wary of the lag once the effect wears off.

Cloud's up special has very quick startup. Combined with its range, it can be used as a powerful out of shield punish. As a recovery, it is a rather poor move because of the weak vertical and non-existant lateral movement and inability to cancel it when coming down afterward.

When used with Limit Break, the knockback is increased. It's a powerful out of shield option that can easily lead to a KO. The recovery power is also greatly improved, as you can move laterally as well as keep Cloud's momentum as he falls. Having limit break offstage makes recovery much better, however it is much better to save it and use it as an attack on stage when possible.

Cloud's down special charges his Limit Gauge. When the Limit Gauge is charged, each special move is enhanced, and the down special changes from Limit Charge to Finishing Touch. You can cancel the charge anytime by pressing the Special button, the shield button, the jump button (which will lead to a jump), or rolling. There is a bit of lag between cancelling the charge and performing the next move.

Finishing Touch deals powerful knockback, despite dealing 1% damage and having a short range.

When fully charged, Cloud receives a buff to his mobility. Once fully charged, the limit meter goes back to 0 after 15 seconds pass, or one of his specials is used. Make use of this move each time an opponent is KO'ed or sent offstage to have Limit ready to go for quick damage or an early KO.

Cloud kickflips the opponent in front of him. It can't be used for combos, due to the lengthy end lag, so use it primarly for sending your opponents off the stage.

Cloud kicks his opponent behind him. It similarly can't be used for combos due to the lengthy end lag, so also use it for sending your opponents off the stage or gaining stage control.

Cloud kicks his opponent into the air. It also can't be used for combos due to the lengthy end lag, but you can juggle the launched opponent via an up air. Cloud's dash attack can also be used to catch the opponent's landing, so this is the go-to throw for racking up quick damage.

Cloud throws his opponent downward and sends them into the air. Like all of Cloud's throws, it doesn't have any true follow ups. 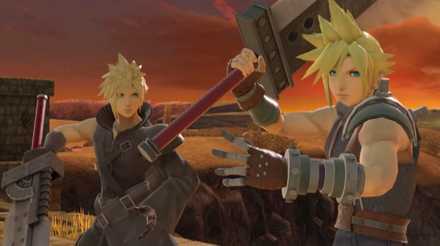 Cloud has an alt costume, in the form of his Advent Children outfit. Both outfits have several color variations. 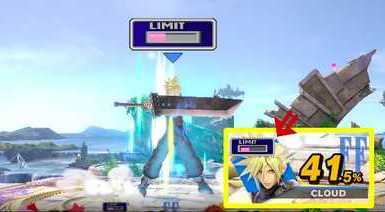 In Smash Ultimate, Cloud's Limit Gauge is always visible, allowing you to more reliably predict when it will come out. The limit ability was considerably nerfed, as it will now dissappear if not used within 15 seconds.

How to Unlock Cloud

There are three ways to unlock Cloud. Completing any of these, then defeating Cloud when they appear in the “a New Challenger Appears” screen will allow you to use them afterward.

In order for us to make the best articles possible, share your corrections, opinions, and thoughts about 「Cloud Guide: Matchup Chart and Combos | Super Smash Bros Ultimate」 with us!