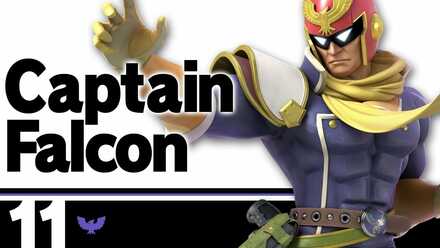 This is a guide to Captain Falcon in the game Super Smash Bros. Ultimate. Everything about Captain Falcon, including how to unlock them, bread and butter combos, frame data, alt costumes and skins, as well as Captain Falcon matchups and counters, can be found here.

A fast and flashy brawler

Much like in previous installments, Captain Falcon has very high mobility, with one of the fastest dash speeds in the game. Falcon can rush down his opponents and use one of his many combo starters (Dash Attack, Gran, Aerials, Side B, etc) to land combos and rack up damage fast. Captain Falcon can use his quick smash attacks or the sweet spot of his forward aerial to KO opponents after racking up enough damage.

His greatest weakness lies in his recovery, which is rather predictable. He is thus rather prone to getting edgeguarded. Additionally, he lacks a projectile and is easy to combo, so Falcon players will need to take advantage of his superior mobility to avoid trouble.

1. -2 = Disadvantage. -1 = Slight Disadvantage or Even. 0 = Even. +1 = Slight Advantage or Even. +2 = Advantage.
2. The matchup chart was based around both the opinions of professional players of each character, as well as our own experience through playing Captain Falcon.
3. Characters within each tier are unordered
4. Pokemon Trainer's individual Pokemon (Squirtle, Ivysaur, and Charizard) as well as Echo fighters with no significant difference than their regular counterpart are not shown.
5. For other characters who are not shown here, we are still investigating the matchup.

Captain Falcon's out of shield options are somewhat limited, as the fastest options he has are all 10 frames, which isn't quick enough to punish safe moves. If a move is punishable, usually grab is the best option, as it can provide the biggest reward. Up special can work too, if you predict your opponent will shield after their attack, but 14 frames is pretty slow for a punish, so in most cases, you'll just need to try and reset neutral instead.

Captain Falcon's jab has quick startup, and has two variations: a 3 hit combo by pressing holding the attack button, or a rapid jab by quickly inputting it three times. The full rapid jab combo does pretty good damage, so it is a good whiff punish option for moves with low endlag.

Dash Attack has a long hitbox, so it is good for apporaching, covering a ledge getup, or whiff punishing. It can catch landings and even lead into combos, but it is unsafe on shield, so don't overuse it. At high percents, it can KO.

Falcon's forward tilt is fast and has pretty good range. It will move Captain Falcon slightly forward after using, so it can be used to control spacing.

Captain Falcon's uptilt has a meteor hitbox on it, making it an effective edgeguarding tool. If you stand near the ledge when an opponent is offstage, and time the attack right, it will spike them as they try to recover.

Down Tilt has somewhat slow startup and decent range. Like ftilt, using it moves Falcon forward a bit, so you can use it for microspacing. It also has high knockback, and can be used for poking, as well as edgeguarding.

Although it has a pretty slow startup (19 frames), it can sometimes be hard for an opponent to make out, so it is somewhat easy to hit for a smash attack. It can be useful as a mixup by running away from an opponent, then quickly changing direction with it. It can be angled up or down to hit opponents of different sizes. Whiffing it will usually lead to a punish, however.

Captain Falcon's up smash is good for racking up damage, and can even combo into aerials at certain percents. However, it has very low endlag, making it hard for opponents to punish, especially if used from under a platform.

While it is probably the least useful of his smash attacks, down smash can still be used to catch a roll, and even KO at higher percents. The back hit is stronger than the first one, so try to hit opponents with the second hit. Like up smash, it has very little endlag, and can be hard to punish.

Neutral air comes out fast, and is a great combo starter if fast falled, as it can lead into another neutral air, or even a forward air. It is also a good follow up for a down throw.

Back air is quick, and -5/-7 on shield, making it good for applying pressure. It will send opponents horizontally, making it great for edgeguarding.

Captain Falcon's up air is used as a combo extender. If you get familiar with how it hits an opponent, it can be used to combo into forward air.

Captain Falcon's down air has a meteor hitbox, so it can be used to spike opponents offstage. On stage, it can also combo into forward air for a powerul kill confirm.

Falcon Punch is an extremely powerful move, but has very long startup and endlag, making it hard to make use of. If you press the stick in the opposite direction during its startup animation, you can reverse the direction to deal even more damage. Its main application is as a shield break punish, or as a hard read for a stylish punish.

Falcon's side special has armor before the move connects. It is great to use as a combo starter into up air, etc, but it has significant endlag, so whiffing will lead to a punish.

Falcon Dive is mostly just used for recovery. If it catches an opponent in the air, it can be used again, allowing him to counter an edgeguard attempt. It is also a command grab, so it will grab onto opponents who were shielding.

Falcon kick can be used for recovery when knocked to a high part of the screen. Its other applications are for getting out of disadvantage (although it should be a mix up, as it can be punish if overused), an approach option, or as a whiff punish.

Forward throw is mainly used for gaining stage control, or to throw an opponent offstage. At very high percents, it can KO if used near the ledge.

Like forward throw, back throw is used for gaining stage control, or to throw an opponent offstage. At high percents, it can KO if used near the ledge (sooner than forward throw).

Throws an opponent upwards. Doesn't lead to any true opponents, but can be used to try and juggle opponents with poor disadvantage.

Down Throw is Captain Falcon's best throw for combos, so it is typically the go to throw in most scenarios. It can be followed up with a Nair to rack up damage.

How to Unlock Captain Falcon

There are three ways to unlock Captain Falcon. Completing any of these, then defeating Captain Falcon when they appear in the “a New Challenger Appears” screen will allow you to use them afterward. 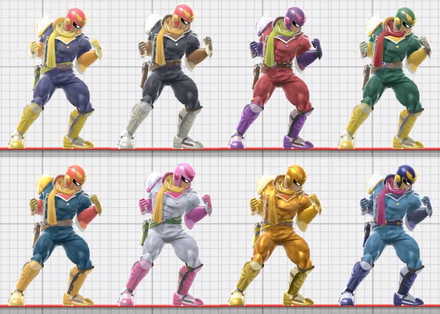 Register as a member and get all the information you want. (It's free!)
Login
Opinions about an article or post go here.
Opinions about an article or post
We at Game8 thank you for your support.
In order for us to make the best articles possible, share your corrections, opinions, and thoughts about "Captain Falcon Guide: Matchup Chart and Combos" with us!
When reporting a problem, please be as specific as possible in providing details such as what conditions the problem occurred under and what kind of effects it had.