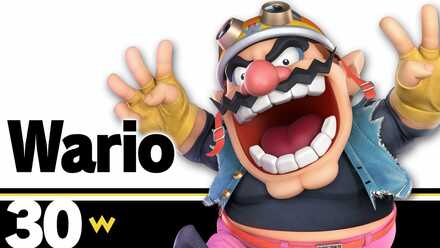 This is a guide to using Wario in Super Smash Bros. Ultimate. Wario's bread and butter combos, how to unlock, frame data, alt costumes and skins, as well as Wario's matchups, counters, and tier list placement can all be found here.

A character with powerful hitboxes and an OHKO special

Smash Ultimate Wario has several long lasting aerial attacks that allow him to apply pressure and damage to opponents. His primary gameplan revolves around use of his aerials to tack on damage, finally comboing into Waft (down special), which can KO at extremely early percents. Waft can generally be used twice per match (if playing 3 stocks / 7 minutes).

Wario's primary means of recovery is his Side Special, which summons his bike. Compared to Smash 4, the time it takes before his bike can respawn has become longer, meaning that he will struggle to recover if he cannot gain access to it.

1. -2 = Disadvantage. -1 = Slight Disadvantage or Even. 0 = Even. +1 = Slight Advantage or Even. +2 = Advantage.
2. The matchup chart was based around both the opinions of professional players of each character, as well as our own experience through playing Wario.
3. Characters within each tier are unordered
4. Pokemon Trainer's individual Pokemon (Squirtle, Ivysaur, and Charizard) as well as Echo fighters with no significant difference than their regular counterpart are not shown.
5. For other characters who are not shown here, we are still investigating the matchup.

Wario's frame data and moveset gives him access to several good out of shield options, depending on the situation. His quickest out of shield option is his up special (Crokscrew), which will come out in only 6 frames, and can even KO opponents at higher percents. However, since this move doesn't have any follow-ups, and will leave him very vulnerable if whiffed, generally neutral air will be his go-to out of shield option, thanks to its quick startup and long lasting hitbox, although forward air is another good option, since it has quick startup as well and does more damage during the first active hitbox.

Another niche out of shield option Wario has is using his down special (Wario Waft) out of a jump. Note that the move's startup changes depending on how much charge it has, so only a half charged waft will allow him to use the move after a jump for a total of 11 frames. Up Smash can be used to hit opponents attacking from above Wario, coming out in 11 frames (although up special can be used for this as well). Shield grab is a somewhat slower option, and since Wario has limited follow-ups from his throws, generally an aerial will be a better option.

Wario's jab pushes opponents in front of you away. However, it's not a great get-off-me tool due to having a startup that is slower than most tilts, so it's not a very useful move overall.

Wario's dash attack has a quick startup and is great for sending opponents away. The dash's speed and hitbox duration make it a decent approach tool as well, thanks to the fact that it can also cross-up shields. At higher percents, the move also has KO potential.

Wario's forward tilt is great for damage and knockback. However, it is not the best poking tool, due to the lengthy startup and cooldown. It can be angled up or down, and can KO at higher percents.

Wario's up tilt has excellent vertical range, which makes it great as an anti-air attack or as a combo starter. Several of Wario's aerials can be comboed into from this move, as well as Wario Waft, which is an essential kill confirm.

Wario's down tilt has a quicker startup than his Jab, so it's mainly used as an alternative over the Jab. It has good horizontal range, and is -7 on shield, making it a great poking tool. It also has follow-ups into dash attack or aerials, depending on the opponent's percent.

Wario's forward smash delivers a strong knockback, although, Wario has better KO moves, such as Forward Tilt, Dash Attack, and Down Special, so you won't need to resort to this particular move in most cases. It does have a large hitbox, but its endlag makes it punishable if whiffed.

Wario's up smash similarly delivers a strong vertical knockback. When attacking, Wario's head is intangible, which makes it good for anti-air attacks. His startup isn't as quick as Mario's Up Smash, and comes with a significant amount of endlag, so be careful about using it when you can easily be whiff punished.

Wario's down smash is a three-hit move with a quick startup. Because of the quick consecutive hits, it's good for covering a roll, but each hit successively decreases the knockback and damage dealt. It is Wario's fastest smash attack.

Wario's neutral air has a very quick startup, and its long lasting hitbox covers Wario's front and back. The two-hit attack can lead to some good aerial combos or serve as an effective get-off-me tool.

Wario's forward air similarly has a very quick startup. Since its attack range is greater than his neutral air's attack range, it's used when attacking from approaching from outside Nair's attack range. Additionally, its long lasting hitbox and knockback make it great for edgeguarding opponents offstage.

Wario's back air is great for dealing damage and knockback, as it's the aerial with the most KO potential. However, Wario is very vulnerable during the attack's lengthy cooldown, so be careful not to miss and eat a punish.

Wario's up air is excellent for vertical damage and knockback. It has a quick startup and is used for aerial combos or juggling an opponent. It can also combo into Waft, which is a very powerful KO confirm that will work at low to mid percents.

Wario's down air is used to deal quick consecutive hits. The seven-hit attack can also be used as as quick way to get behind the opponent's shield while attacking. Wario is most vulnerable from his top and sides during the move, so be wary of attacks from those directions. At higher percents, it can KO an opponent.

Wario bites the opponent in his Neutral Special. Since it is a command grab, Wario's Chomp will work on shielded opponents. Chomp can also heal Wario. Eating items and projectiles (including Wario's Bike) can heal Wario, while eating explosives deal damage to Wario. Explosives do have a blast range, so others within the range get damaged as well.

Additionally, the charge of Wario's Down Special is affected by what he consumes with the Chomp.

Wario drives around the stage on his motorcycle during his Side Special. Pressing up makes Wario do a wheelie, and pressing down lowers the front wheel. Bringing down the wheel results in a powerful ground slam, but changing the position of the wheel, in general, changes the hitbox and knockback potential of the move.

Additionally, the bike can also be ridden in the air or thrown at opponents, to launch them back a decent distant. This makes it one of Wario's main recovery tools, as it can be used before a double jump, and it provides much better horizontal recovery than corkscrew does.

The bike is on screen for a limited amount of time. The bike can be dismounted, destroyed, or even eaten before it disappears. After this, Wario must touch the stage at least once, and have 6 seconds pass before being able to reuse it.

Wario's Up Special launches straight up into the air while rotating his body. Since the special has hitboxes to its side, it could be used as a quick out of shield punish, in addition to a recovery. However, the vertical distance is fairly short, and he's vulnerable to attacks from above, so it's better to prioritize using the Wario Bike for recovery, and only use corkscrew when already near the ledge.

Wario's Down Special is an attack using Wario's flatulence. The charge of the attack increases as time passes, and if Wario eats items with his neutral special. A higher charge results in greater damage and knockout. The charge cannot be depleted unless the move is utilized, meaning that it will stay with Wario even if he is KO'ed.

At no charge, the attack deals no damage. At low or half charge, the move deals moderate damage and knockback. At maximum charge, Wario will glow and be sent flying upwards with a powerful headbutt hitbox when the special is used. In a 7 minute match, Wario can usually get out a full waft twice, as it takes about two minutes to get out. It can be comboed into from an up aerial, resulting in a very early kill confirm.

Wario's forward throw is used for launching the opponent forward. The throw's lengthy cooldown makes it unsuitable for combos.

Conversely, Wario's back throw is used for launching the opponent backward. It similarly has a lengthy cooldown that's not suitable for combos.

Wario's up throw throws the opponent upwards. It could connect to an Uair if at a lower percentages, so it is Wario's go-to throw.

Wario's down throw slams on the opponent thrown to the ground. The throw's lengthy cooldown also makes it unsuitable for combos.

How to Unlock Wario

There are three ways to unlock Wario. Completing any of these, then defeating Wario when they appear in the “a New Challenger Appears” screen will allow you to use them afterward. 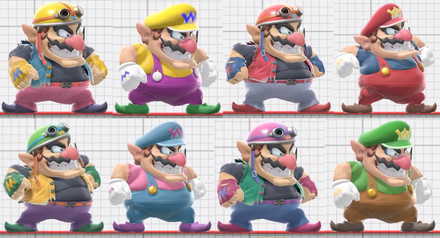 In order for us to make the best articles possible, share your corrections, opinions, and thoughts about 「Wario Guide: Matchup Chart and Combos | Super Smash Bros Ultimate」 with us!