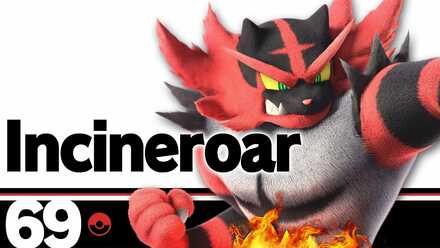 This is a guide to using Incineroar in Super Smash Bros. Ultimate. Incineroar's bread and butter combos, how to unlock, frame data, alt costumes and skins, as well as Incineroar's matchups, counters, and tier list placement can all be found here.

A powerful brawler with a unique Revenge mechanic

Incineroar is a character with good close range combat, thanks to good frame data, as well as a number of powerful moves. His signature Revenge zechanic is triggered by Down B, and if he is hit while the move is active, it will power him up significantly. When fully buffed, moves such as his command grab side special become immensely powerful, capable of KOing extremely early. Incineroar should fight using a mix of his long lasting moves such as Nair and neutral B to rack up damage, then try and go for a KO with a back throw or Side Special.

Although his frame data is rather good for a heavy, Incineroar has poor mobility, and will struggle to keep up with faster characters. His recovery is also terrible, perhaps one of the worst in the game. Incineroar will have a hard time getting back to the stage, so it is important to avoid getting thrown off. Lastly, Revenge can be cancelled if Incineroar is grab, meaning that other grapplers could give him a hard time.

1. -2 = Disadvantage. -1 = Slight Disadvantage or Even. 0 = Even. +1 = Slight Advantage or Even. +2 = Advantage.
2. The matchup chart was based around both the opinions of professional players of each character, as well as our own experience through playing Incineroar.
3. Characters within each tier are unordered
4. Pokemon Trainer's individual Pokemon (Squirtle, Ivysaur, and Charizard) as well as Echo fighters with no significant difference than their regular counterpart are not shown.
5. For other characters who are not shown here, we are still investigating the matchup.

Incineroar has pretty decent out of shield options, with neutral air as the go-to option, thanks to its quick startup, long lasting hitbox, and combo potential. Up B, while a bit slower, gains armor from frame 4, allowing Incineroar to tank the opponents next attack and win the interaction. While up smash is quite slow, it can also be used to punish very unsafe moves that end with the opponent close to Incineroar.

Incineroar's jab has a quick startup. It's mainly used as a get-off-me tool at close range, but since Incineroar has better get-off-me tools, such as Neutral Air and Darkest Lariat, there isn't much reason to use jab, other than to pressure shields.

Incineroar's dash attack has a quick startup, as well as great damage and range. It's a valuable for a slow fighter like Incineroar, because it gives him a quick burst option to approach opponents.

Incineroar's forward tilt is great in terms of damage, range, and knockback. Although it has a slow startup, its strong knockback allows it to be used as a KO move.

Incineroar's up tilt has quick startup. Since Incineroar's head is intangible during the attack, it's used most effectively as an anti-air attack for snuffing out aerial approaches from the opponent.

Incineroar's down tilt has somwhat quick startup. It's mostly used as a combo starter for Incineroar's aerials or other moves.

Incineroar's forward smash deals great damage and knockback. The sweetspot at the tip of the move has particularly strong knockback, being able to KO opponents at even less than 100%.

Incineroar's up smash likewise deals great damage and knockback, though it has somewhat slow startup. While it won't be effective against attacks that cross up Incineroar's sheild, it can also be utilized as an out of shield option to hit opponents in front of Incineroar, or to catch jumps.

Incineroar's down smash similarly deals great damage and knockback. Although it has a slow startup, Incineroar immediately performs a high jump at the beginning of the move, shifting its hurtbox, so you can use it to avoid an opponent's attack and follow up with one of your own.

Incineroar's neutral air has a very quick startup. Incineroar's entire body comprises the hitbox of the attack, so it's great as a get-off-me tool at close range.

Incineroar's forward air has quick startup and deals great damage. It's effective to use as a spacing tool due to its long range. It can be comboed into from a down throw or down tilt to rack up damage.

Incineroar's back air has quick startup, as well as great damage and knockback. It has some of the best startup of all of Incineroar's kill moves, making it a very useful KO option.

Incineroar's up air has quick startup. It doesn't deal too much damage, but its wide range makes it easy to connect hits, which makes it good for juggling opponents in disadvantage.

Incineroar's down air has the ability to meteor spike. Since Incineroar has a pretty weak recovery, it's best to avoid going for it too much as it presents a huge risk, but it can be used to edgeguard fighters like Donkey Kong who are vulnerable to attacks from above.

Incineroar's Darkest Lariat is a spin attack. This special has quick startup, as well as intangibility during startup, so it can be used instead of neutral air as a quick get-off-me tool.

Additionally, since you can move laterally during the attack by tilting the stick, you can still try to head towards and hit your opponent even if you initially miss.

Incineroar jumps then dives onto its opponent in its up special. While going up, you can laterally shift the landing position by moving left and right on the move stick.

It's mainly used for recovery, although it is somewhat poor as a recovery tool. However, since it deals strong damage and has damage-based armor during its climb, you could also make use of it as a KO move.

Incineroar spins and hurls its opponent forward. It can't be used for combos due to the endlag of the attack. However, it deals strong damage and knockback, which makes it a viable KO move at high percents near the ledge.

Incineroar performs a German suplex for its back throw. It also can't be used for combos, but it is also very powerful, and can KO opponents near the ledge. When combined with Revenge, it becomes even stronger.

Incineroar jumps and throws its opponent upward. If the opponent has about 150% damage, you can possibly KO them.

Incineroar slams its opponent to the ground for its down throw. It's the only throw of Incineroar that both does high damage and can be used as a combo starter, so it is the go-to throw at lower percents.

How to Unlock Incineroar

There are three ways to unlock Incineroar. Completing any of these, then defeating Incineroar when they appear in the “a New Challenger Appears” screen will allow you to use them afterward. 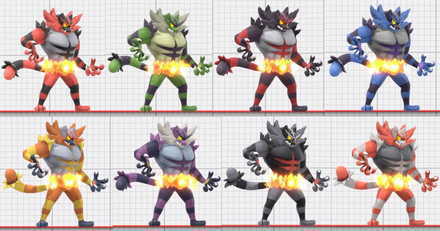 In order for us to make the best articles possible, share your corrections, opinions, and thoughts about 「Incineroar Guide: Matchup Chart and Combos | Super Smash Bros Ultimate」 with us!