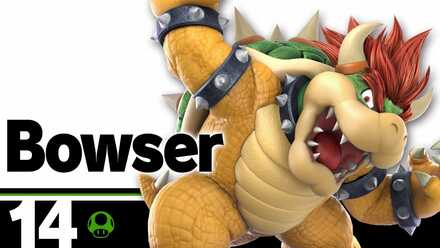 This is a guide to Bowser in the game Super Smash Bros. Ultimate. Everything about Bowser, including how to unlock them, bread and butter combos, frame data, alt costumes and skins, as well as Bowser matchups and counters, can be found here.

Smash Ultimate Bowser is perhaps the best the character has ever been. As always, he has access to a ton of KO moves, which can take opponents stocks extremely early. While his moves are all rather slow, he is immune to rapid jabs, and several of his attacks have super armor on them, allowing him to tank many opponent attacks and win interactions. He also boasts very high dash speed, and can edgeguard with B and use his command grab (side B) to clean up stocks.

Being a heavyweight, he is a target for projectiles, so he will have to make use of his speed to avoid getting camped. He also has a terrible disadvantage state, and mediocre recovery, which can make it tough for Bowser when he is getting comboed by an opponent. Although he has rather slow moves, each one of them hits like a truck, and Bowser is one of the easier character to pick up and play as.

1. -2 = Disadvantage. -1 = Slight Disadvantage or Even. 0 = Even. +1 = Slight Advantage or Even. +2 = Advantage.
2. The matchup chart was based around both the opinions of professional players of each character, as well as our own experience through playing Bowser.
3. Characters within each tier are unordered
4. Pokemon Trainer's individual Pokemon (Squirtle, Ivysaur, and Charizard) as well as Echo fighters with no significant difference than their regular counterpart are not shown.
5. For other characters who are not shown here, we are still investigating the matchup.

This combo can be used on low percentage opponents. It can cause up to 36% in damage and is an easy combo, so be sure to remember it.

This combo can be used on low percentage opponents. Perform a neutral air while fast falling to make this combo work.

This combo can be used on low percentage opponents.

Bowser's go to out of shield option is his up special, which comes out at 6 frames, has a long lasting hitbox, and can be moved around. If an opponent's attack was very safe, whiffing this move will lead to a punish, so be careful not to get baited into doing so. If the opponent has a habit of hitting your shield and then shielding, you can jump and use side b, which will grab a shielded opponent, and comes out in 9 frames, making it even faster than a shield grab.

Since Bowser doesn't have a ton of moves that come out super quick, his jab is a good get-off-me tool to use at close range to put some space between you and an opponent.

Bowser's dash attack has a long lasting hitbox and deals great damage. It is great for catching landings, or for whiff punishing a move while it is in endlag.

Bowser's ftilt has great range, as well as damage and knockback. It does have noticeable endlag though, so be careful not to whiff it.

Bowser's up tilt has great knockback on it, and has a wide hitbox that damages anything above Bowser. The part of him attacking is also invulnerable, making it great for catching jumps, or as an anti-aerial.

Bowser's down tilt deals good damage, and hits low, so it is great for edgeguarding an opponent, as it can two-frame recoveries.

Bowser's forward smash has great range, deals a ton of damage, and has extremely high knockback. It has considerably slow startup and long endlag, but it can KO opponents at very low percents, so it is excellent as a shield break punish. All of Bowser's smash attacks have armor on them, so this is great for tanking an attack while KOing an opponent.

Like Fsmash, Bowser's up smash deals good damage and has high knockback. It is somewhat slow in its startup, but since Bowser's shell becomes invulnerable, it is an excellent anti-aerial for opponents who try to attack from disadvantage.

Down Smash is Bowser's quickest smash attack, and it is mostly used to catch an opponent's rolls.

Bowser's neutral air has a long lasting hitbox. It does have pretty quick startup, but it is rather slow at hitting grounded opponents, so it is not the best get-off-me tool. It is also unsafe to use on shield.

Bowser's forward air deals good damage and has excellent knockback. It has noticeable landing lag, but the move covers the entire 180° in front of him, so it is a decent poking option (-9/-10 on shield). It is also very good for edgeguarding.

Back air is Bowser's strongest aerial. It doesn't have the range of forward air, but it is slightly faster, and deals more knockback. Note that it is very unsafe on shield.

Bowser's up air deals great damage. While it is not the fastest up air, and its range is not all that big, hitting an opponent with it in the air is a good kill option.

Bowser's down air has him slam down on the ground with his shell, dealing considerable damage and knockback. It is good for hitting an opponent recklessly trying to hit Bowser from above, but it has noticeable endlag, and is unsafe on shield, so it will be predictable if overused. The shockwaves just to the side of the attack will also make an opponent flinch even if the attack didn't directly hit them, which can prevent an opponent from punishing.

Bowser's neutral special unleashes flames at an opponent, and can be shifted up or down to change direction mid-attack. If used on an opponent's shield, they will likely be unable to break out of it and punish, so their only option is to jump over it and attack Bowser from behind. Holding B allows you to extend the move, but it will gradually lose range before running out. In order for it to replenish, it needs to cooldown for 12 seconds.

When angled downward, this move is very good for preventing opponents from grabbing the ledge from offstage, as most characters don't have an easy way to deal with it.

Bowser's side B is the fastest command grab in the game, and can grab an opponent from the ground (even when shielded), or in the air. It is a very good mixup against opponents who have been conditioned to shield a lot, and can KO in the early 100% range, especially if it can be landed on a platform.

The move can be shifted left or right by both Bowser and the opponent, but whoever has lower % will have more influence. Grabbing an opponent and diving offstage with the move will allow you to trade stocks with the opponent, making it a good option when you have a stock lead on an opponent (Bowser will always die first when doing this). The move is fast and great for KOing, but it has rather smasll range and long endlag, so be careful not to whiff it.

Bowser's up special makes him spin around in his shell and deal damage to whatever he hits. When grounded, the move can be moved around, and mashing the special button slightly increases damage output.

Its quick startup makes it an excellent out of shield option, allowing Bowser to get opponents who are pressuring his shield off of him quickly, so it is an essential part of his kit.

As a recovery, it is decent, and some characters may struggle to punish it, unless they have some kind of disjoint to hit it with.

Bowser's down special can be used from the ground, or midair. From the ground, he will jump up and do a dive bomb, and when used mid air, he will drop down from where he already was. While it has long startup and endlag if whiffed, it can completely destroy a full shield if an opponent tries to shield the attack, which can allow Bowser to end their stock with a charged forward smash. If used repeatedly, you will get punished for it, but it is a great mixup against an opponent who shields a lot, and can be used after recovering to the stage when an opponent is shielded.

Bowser's forward throw is used for gaining stage control or putting an opponent offstage. It can also KO an opponent near the ledge at higher percents.

Bowser's back throw is also used for gaining stage control or putting an opponent offstage. It KOs a bit earlier than Fthrow, if standing in front of the ledge.

Bowser's up throw puts an opponent directly above him. At low percents, it can combo into other moves like up special, forward air, or up air.

Bowser's down throw allows him to body slam an opponent and send them away. It doesn't lead to any combos, but it deals a ton of damage, so it is your best throw at mid percents for racking up damage.

How to Unlock Bowser

There are three ways to unlock Bowser. Completing any of these, then defeating Bowser when they appear in the “a New Challenger Appears” screen will allow you to use them afterward. 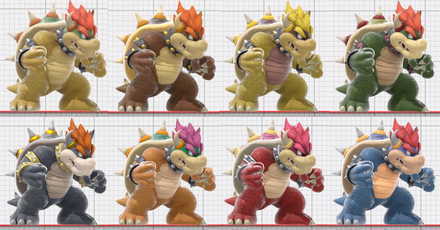 Register as a member and get all the information you want. (It's free!)
Login
Opinions about an article or post go here.
Opinions about an article or post
We at Game8 thank you for your support.
In order for us to make the best articles possible, share your corrections, opinions, and thoughts about "Bowser Guide: Matchup Chart and Combos" with us!
When reporting a problem, please be as specific as possible in providing details such as what conditions the problem occurred under and what kind of effects it had.