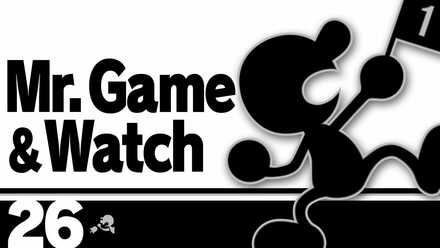 A character with great aerials and out of shield options

Smash Ultimate Mr. Game & Watch has extremely little landing lag on his aerial attacks, making him much stronger than previous games. Additionally, his Up Special (↑ + B) is tied with Little Mac's for the fastest Up B in the game at only 3 frames, allowing Game & Watch to punish nearly any move that hits his shield with an Up B Out of Shield.

Game & Watch does lack a lot of strong moves that will KO opponents, so he needs to make use of his aerials (such as Bair and Nair) to deal damage, and then use his down smash to bury opponents and follow with a forward smash, or edgeguard opponents to seal out the stock.

1. -2 = Disadvantage. -1 = Slight Disadvantage or Even. 0 = Even. +1 = Slight Advantage or Even. +2 = Advantage.
2. The matchup chart was based around both the opinions of professional players of each character, as well as our own experience through playing Mr. Game ＆ Watch.
3. Characters within each tier are unordered
4. Pokemon Trainer's individual Pokemon (Squirtle, Ivysaur, and Charizard) as well as Echo fighters with no significant difference than their regular counterpart are not shown.
5. For other characters who are not shown here, we are still investigating the matchup.

Mr. Game & Watch's jab is pretty quick, and pushes opponents away. Jab 1 can combo into a grab, or a couple of his other moves.

Mr. Game & Watch's dash attack has a long lasting hitbox, and quick startup. When the hitbox ends, you can use Up B to escape from trouble if an enemy attempts to punish its endlag.

Mr. Game & Watch's forward tilt has pretty quick startup, and sends opponents at a great angle. It is a disjoint, so it can snuff out many approaches from an opponent. It can be comboed into from Nair.

Mr. Game & Watch up tilt also sends opponents at an angle that is great for comboing. Once the move connects, it can be followed up with Judge (side special) or back air.

Mr. Game & Watch's down tilt is very fast, and launches opponents away, making it useful for taking stocks, and can be used from the ledge to try for an edgeguard.

Mr. Game & Watch's forward smash deals different damage depending on whether it hits with the tip or the base. The tip of the match (the flame) is more powerful and has better knockback, so try and space the move correctly when using it.

Mr. Game & Watch's has somewhat long startup, but it has a long hitbox and almost no endlag, making it useful for baiting an opponent. It gives Game & Watch intangibility during the attack, so it can be used to beat out other hitboxes.

Mr. Game & Watch's down smash has quick startup and very little endlag, so it can be spammed. Hitting with the tip of the move will bury the opponent, allowing Game & Watch to finish them off with a forward smash, while the base of the attack sends opponents horizontally, making it a powerful tool for taking stocks.

Mr. Game & Watch's neutral aerial is a powerful tool in his kit, with fast startup and a long lasting hitbox, which is great for both racking up damage and comboing into his other moves when fast falled. It is -5/-4 on shield, so it is good for pressuring an opponent.

Mr. Game & Watch's forward air drops a bomb straight down and deals damage after exploding. It can be dropped at the ledge to try and edgeguard opponents. If Game & Watch is damaged before the bomb detonates, they will not be able to go off. The move is -3 on shield, making it a great poking tool.

Mr. Game & Watch's back air has a long lasting hitbox. At low percents, it is useful as a combo extender.

Mr. Game & Watch's up air it a projectile that shoots upward, and is great for juggling opponents. It is very useful as a follow-up to up special.

Mr. Game & Watch's down air has a powerful long lasting hitbox, making it good for damaging opponents directly below you. It has a meteor hitbox on it as well, so it can be used to spike opponents offstage. Even when used on the stage, it has prettly low endlag, so it won't always lead to a punish unless used directly on a shield, where it is unsafe.

Mr. Game & Watch's neutral special is an attack where he throws food from a frying pan, and is good as a safe edgeguarding tool. For characters with poor recoveries, it will damage them and hinder them from making it back.

Tapping the special button more quickly will allow the food to come out quicker, and the control stick can be tilted to change the angle it comes out at.

Mr. Game & Watch's side special will hit an opponent with a hammer while displaying a random number from 1-9, with each number having a different effect. If a 9 appears when hitting an opponent, it is an instant KO. It can be comboed into from down throw.

Mr. Game & Watch's up special has extremely quick startup and grants momentary intangibility, making it a use part of his gameplan. It can be used to snuff out an opponent's approach via an out of shield punish, or to whiff punish a moves end lag. It comes out on frame 3, and after connecting, can be followed up with an up air.

Mr. Game & Watch's down special will absorb energy-based projectiles, while reflecting physical ones. Once three energy projectiles have been absorbed, Game & Watch can release them to deal two times the damage of the strongest move absorbed.

The absorbed bucket stays with Game & Watch even if he loses a stock, so you can surprise an opponent with it right after coming back. The move is very good in matchups against characters like Pikachu or Samus, or rely on energy based projectiles for approaching or dealing damage.

Mr. Game & Watch's forward throw is mostly used for stage control, or to put an opponent offstage for an edgeguard.

Mr. Game & Watch's back throw is mostly used for stage control, or to put an opponent offstage for an edgeguard.

Mr. Game & Watch's up throw puts an opponent in the air, and can be used to try and juggle with up air.

Mr. Game & Watch's down air is a combo starter, and will combo into neutral air or Judge (side special) at low percents.

How to Unlock Mr. Game & Watch

There are three ways to unlock Mr. Game & Watch. Completing any of these, then defeating Mr. Game & Watch when they appear in the “a New Challenger Appears” screen will allow you to use them afterward. 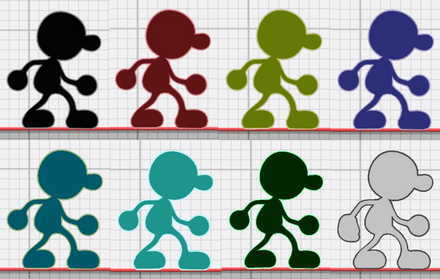 Register as a member and get all the information you want. (It's free!)
Login
Opinions about an article or post go here.
Opinions about an article or post
We at Game8 thank you for your support.
In order for us to make the best articles possible, share your corrections, opinions, and thoughts about "Mr. Game & Watch Guide: Matchup Chart and Combos" with us!
When reporting a problem, please be as specific as possible in providing details such as what conditions the problem occurred under and what kind of effects it had.