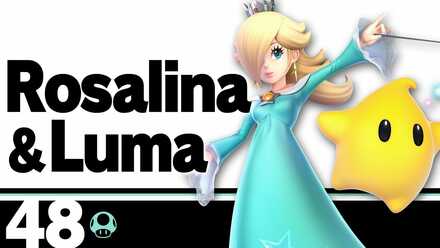 A unique character with excellent range, thanks to Luma

Smash Ultimate Rosalina is a duo character, much like Ice Climbers. However, unlike Ice Climbers, Luma can be placed anywhere, and will respawn after getting KO'ed. Luma gives Rosalina a powerful disjointed hitbox, which lets her attack from a safe distance without putting herself at risk. She also has good aerials and smash attacks, both of which can be used by Luma while Rosalina stays out of the opponent's reach.

Rosalina relies heavily on Luma, so she will struggle for the duration that Luma is gone, if an opponent knocks them out. Rosalina has rather poor disadvantage due to being so floaty, and is easily juggled by her opponents. Her large body is easy to hit, and what's more, her recovery move (up special) lacks a hitbox, so she is a bit prone to being edgeguarded. Rosalina players must take full advantage of Luma to safely attack and KO opponents without them breaking her zoning.

1. -2 = Disadvantage. -1 = Slight Disadvantage or Even. 0 = Even. +1 = Slight Advantage or Even. +2 = Advantage.
2. The matchup chart was based around both the opinions of professional players of each character, as well as our own experience through playing Rosalina ＆ Luma.
3. Characters within each tier are unordered
4. Pokemon Trainer's individual Pokemon (Squirtle, Ivysaur, and Charizard) as well as Echo fighters with no significant difference than their regular counterpart are not shown.
5. For other characters who are not shown here, we are still investigating the matchup.

Rosalina & Luma have decent out of shield options, though none of them are going to be quick enough to punish moves that are very safe. Rosalina's up smash comes out in 8 frames, but grants intangibility from frame 7 and hits directly in front of her, making it her go-to out of shield option. Although the move is much stronger when using the hitbox closer to Rosalina, it has decent range. Rosalina & Luma have different frame data, so when Luma is together with Rosalina, she will be able to use an oos up air or neutral air in 9/10 frames respectively. Rosalina's grab has average range, so it can be used out of shield as well.

Rosalina and Luma's jab comes out fast and can be used as a get-off-me attack. When Luma is away from Rosalina, Luma's rapid jab can be used to quickly catch opponents before they use a strong attack to try and get rid of Luma.

Rosalina's dash attack comes out fast and has good horizontal range. It will also knock your opponent into the air just enough for you to follow up with an aerial. Dash attack can be used to knock opponents into the air even if Luma isn't present, so use dash attack to buy time for Luma to return when it is away.

Rosalina's forward tilt has good range and comes out quick. It's a good tool for spacing, so it can be used out of a dash back away from the opponent.

Rosalina's up tilt also comes out quick, but it has a very narrow horizontal range. Use up tilt to juggle opponents directly above Rosalina and Luma.

Rosalina's down tilt has quick start up and decent range, and when combined with its short endlag, it is ideal for poking at grounded opponents.

Rosalina's forward Smash has high knockback. Rosalina alone has weak knockback, so be sure to attack when Luna is also with her, or attack an opponent with Luma's forward smash when Rosalina is far away from the opponent so she can avoid a punish.

Rosalina's up smash comes out fast and has strong knockback. Due to its fast start up, up smash works well as an out of shield option. Rosalina's head is also intangible during this attack, which makes it useful against opponents trying to land with an aerial attack.

Rosalina's down smash comes out fast. It has little knockback, so use it to knock opponents near the ledge off stage and go for an edgeguard.

Rosalina's neutral air has a lingering hitbox and knocks opponents into the air, allowing it to be used as a reliable follow-up attack or as a combo starter. It is safe on shield (-4/-5), making it a good tool for shield pressure.

Rosalina's forward air has good reach, and by using the rising variant (pressing jump and forward+A at the same time), it will have little landing lag, making it a good poking tool.

Rosalina's back air comes out fast and has decent knockback. Due to this, it can be used as an edgeguarding tool if you can land a hit on an opponent that is offstage.

Rosalina's up air comes out quickly and has good range. The speed and range of the ring that comes out above Rosalina makes it ideal for juggling opponents in disadvantage. It also has strong knockback and can start to KO from 100%.

Rosalina's down air has a meteor hitbox that can spike opponents. The meteor hitbox is only active at the beginning of Rosalina's attack, but even a late hit can knock your opponent downward. Luna's hitbox also has strong knockback, so the move is very good for edgeguards.

Neutral special shoots Luma in front of Rosalina. If the special button is held down, Luma will gain distance and damage. If this attack is used when Luma is away from Rosalina, it will return to Rosalina. Luma can also be called back when Rosalina is knocked back. While returning, Luma can still attack which could help Rosalina if she is trapped in a combo.

Use this attack to put Luma in between you and your opponent. Luma can punish their dodges or jumps while Rosalina stays back a safe distance. Luma will be harder to knock back after Luma Shot is used.

Luma will shoot three star projectiles forward at different angles. It has good range and a lingering hitbox, making it a good poking tool at mid-ranges. When Luma is seperated, this attack can safely rack up damage. Despite looking like a projectile, this move is actually a disjointed hitbox. This means that it cannot be reflected, absorbed, or pocketed.

A long jump that propels Rosalina and Luma forward. It can also be angled to be nearly horizontal or diagonal by changing the direction of the stick before the move starts, but the direction of the jump cannot be change once it has begun. Rosalina goes into free fall after the move ends, but Luma can still use aerials and normals.

Gravitational Pull pulls in any items in Rosalina's vacinity and makes them her own. This means that they will damage any opponent or will be automatically equipped or consumed depending on the type of item. This move can also be used to pull in recovery items and makes a great gimping tool against characters like Ness and Lucas who rely on a projectile to recover.

At low percents, Rosalina's forward throw can connect into dash attack. At around 160%, it can KO when used near the ledge, making it her strongest kill throw (though Rosalina has options to KO much earlier).

At low percents, Rosalina's back throw can connect into forward air.

Rosalina's up throw can lead into several combos such as up tilt or up air.

Rosalina's down throw will knock an opponent in the air slightly, and can be followed up with a forward air.

How to Unlock Rosalina & Luma

There are three ways to unlock Rosalina & Luma. Completing any of these, then defeating Rosalina & Luma when they appear in the “a New Challenger Appears” screen will allow you to use them afterward. 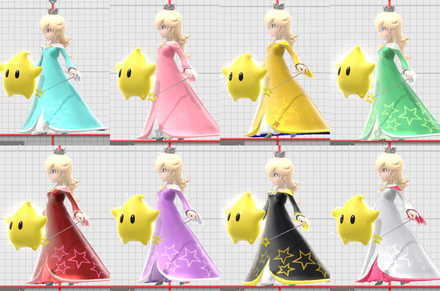 Register as a member and get all the information you want. (It's free!)
Login
Opinions about an article or post go here.
Opinions about an article or post
We at Game8 thank you for your support.
In order for us to make the best articles possible, share your corrections, opinions, and thoughts about "Rosalina & Luma Guide: Matchup Chart and Combos" with us!
When reporting a problem, please be as specific as possible in providing details such as what conditions the problem occurred under and what kind of effects it had.