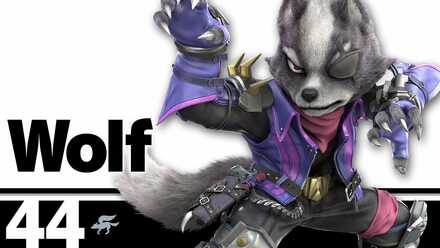 This is a guide to using Wolf in Super Smash Bros. Ultimate. Wolf's bread and butter combos, how to unlock, frame data, alt costumes and skins, as well as Wolf' matchups, counters, and tier list placement can all be found here.

A character with a powerful projectile and quick aerials

Smash Ultimate Wolf really excels in close range combat. His tilts and aerials are all mostly quick, with forward tilt and down tilt serving as poking tools, and forward aerials for comboing opponents in disadvantage. Since Wolf has rather low mobility, he can use Blaster (neutral B) in order to control neutral, then use one of his aerials or a grab to respond to how the opponent reacts. Along with his reflector, Wolf's kit allows him to play a versatile game, with several options for dealing with his opponents.

Wolf's biggest weakness is in his recovery. Both Up Special and Side Special can be used to recover, although they only carry Wolf a short distance. He is rather prone to getting edgeguard, and his body size and air mobility make him easy to combo as well. While Wolf has plenty of options for KO'ing opponents, many of them are punishable, so he can also struggle to KO a bit. However, if you can manage to work around Wolf's poor recovery, Wolf is a very powerful character who is a great counter for many characters in the game.

1. -2 = Disadvantage. -1 = Slight Disadvantage or Even. 0 = Even. +1 = Slight Advantage or Even. +2 = Advantage.
2. The matchup chart was based around both the opinions of professional players of each character, as well as our own experience through playing Wolf.
3. Characters within each tier are unordered
4. Pokemon Trainer's individual Pokemon (Squirtle, Ivysaur, and Charizard) as well as Echo fighters with no significant difference than their regular counterpart are not shown.
5. For other characters who are not shown here, we are still investigating the matchup.

Wolf has pretty decent out of shield options, with several moves that can be utilized in 10 frames or less. His quickest option is a jump followed by down B, although it is a somewhat niche option. In most cases, Wolf will want to go for either a neutral air or grab out of shield, though beware that he will not be able to punish safely spaced moves for the most part. Neutral air has a strong and lingering hitbox, making it good for beating out an opponent's follow up move, while a grab can lead into several combos. Up smash is a slower option, though it has great range, and can hit opponents above or to the side of Wolf to punish laggier moves.

Wolf's jab is a three-hit combo that has decent range, so its mostly used as a quick get-off-me tool or landing option.

Wolf's forward tilt has great knockback, start up, range and damage. Because of its low lag it can be spaced on an opponent to apply shield pressure, and it can also be tilted up or down to try and snuff out an aerial approach or hit an opponent hanging on the ledge. If timed properly, it can even be angled downward to 2-frame an opponent's recovery.

Wolf's up tilt may have a short startup, but since its hitbox is narrow and short, and it doesn't allow for any combos. However, it is powerful enough to KO opponents at higher precents, and can be used to pressure opponents standing on platforms.

Wolf's down tilt has great range, and quick startup, making it one of his main poking tools to use in neutral.

Wolf's Forward Smash is one of Wolf's most reliable KO moves. It has extremely low endlag (only 18 frames), and is -10 on shield, making it a very difficult move to punish, especially if followed with a spotdodge or other defensive option.

Wolf's up smash has great range and knockback, and it has the shortest startup of all of Wolf's smashes. Because its first few frames attack on the left and right sides of Wolf, it can be used as an out of shield option.

Wolf's down smash is also a great move for KOing, and because it also hits on both sides of Wold, it can used to easily hit an opponent when they try to cross up your shield with a roll, etc.

Wolf's neutral air has great range and quick startup, making it one of his most important neutral tools. Its long lasting hitbox, along with the fact that it is -4/-5 on shield make it great for pressuring an opponent, and it can be used as a get off me tool. Due to its short knockback, especially on the late hit, it can be used as a combo starter. It is also one of Wolf's many tools for ledgetrapping.

Wolf's forward air has good range and startup, and depending on the character you're against, you can string this move together multiple times to rack up damage. Like neutral air, it can be used as a poking tool and combo starter, and at low percents, can lead into a grab or tilt.

Among all of Wolf's aerials, Wolf's back air has the most knockback, making it the best KO move. It has decently quick startup for a KO option, and it can be used to pressure a shielded opponent. At high percents, this is a go-to move for clearing a stock.

Wolf's Up Air is excellent for juggling opponents in the air, and can also be used as a combo finisher. At higher percents, it is capable of KOing.

This move has a meteor hitbox that allows you to spike opponents at the cost of having a high start up and long end lag. Since Wolf's recovery is quite poor, using it offstage is a very risky option, although landing it can be very rewarding.

Wolf's Blaster fires a large wave of energy in front of Wolf, dealing great damage at a decent range and speed. It is transcendent, meaning that it will pass through other projectiles. When used at close range, the blaster itself can damage an opponent too.

Use it to control neutral and force opponents to take evasive actions. Smart usage of this will dictate the pace of the game, and getting a read on your opponent's movement will allow you to punish them for picking a certain option.

Wolf's Wolf Flash is used for recovery or to KO. The tip of the hitbox is intangible and deals high damage and massive knockback. Even at higher percents, it can be comboed into from a forward air. The sweetspot is hard to hit outside of using a combo, so it's primarily used as a recovery tool outside of this. It can sometimes allow for a reverse edgeguard if you hit a careless opponent standing too close to the ledge.

Fire Wolf is Wolf's 8 direction recovery that can go any of the cardinal or diagonal directions. Be aware that its start up is long, and it offers poor vertical distance, so you will need to mix up your recovery by sometimes using up special, and sometimes using side special. It is a pretty damaging move if landed on an opponent too, and can be used as an occasional mixup for a KO at high percents.

Wolf's Down Special is a Reflector, which reflects projectiles back at the user at a higher speed, which makes them cause higher damage. It comes out very quick, and can be used in combos as well.

Forward Throw launches Wolf's opponent, albeit a short distance. At high percentages, it can put an opponent into tumble and allow for a jab lock or tech chase.

Wolf's Back Throw has strong knockback and can be used to kill from the ledge at higher percentages.

Wolf's up throw tosses opponents upwards, opening them up for aerial followups such as up air.

Wolf's Down Throw knocks his opponents slightly forward. The opponent isn't sent as far as they would be in a forward throw, and it has less endlag, allowing for a follow up with dash attack, etc.

How to Unlock Wolf

There are three ways to unlock Wolf. Completing any of these, then defeating Wolf when they appear in the “a New Challenger Appears” screen will allow you to use them afterward. 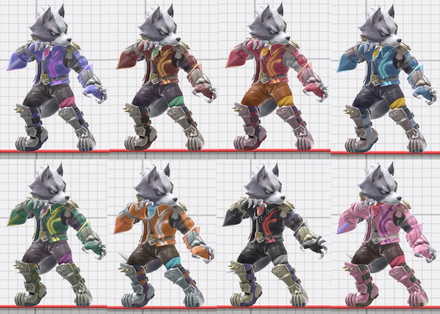 In order for us to make the best articles possible, share your corrections, opinions, and thoughts about 「Wolf Guide: Matchup Chart and Combos | Super Smash Bros Ultimate」 with us!