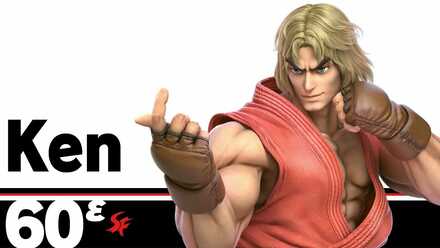 This is a guide to using Ken in Super Smash Bros. Ultimate. Ken's bread and butter combos, how to unlock, frame data, alt costumes and skins, as well as Ken's matchups, counters, and tier list placement can all be found here.

Smash Ultimate Ken has the unique mechanic (shared with Ryu and Terry), which allows him to always face an opponent in 1 vs 1 battles. Ken has very potent combos and powerful moves like Shoryuken (Command Input) and Down Aerial that are great for KOing. Ken also has a decent projectile in Hadoken. His deadly combo game and powerful finishers allow him to deal devastating damage to opponents after finding an opening.

Ken has somewhat underwhelming mobility, as well as a poor recovery. His attacks also lack range, and thus he struggles against swordies and characters with projectiles. This also makes it a bit difficult for Ken to approach opponents in order to start combos. Ken players will need to be careful not to get edgeguarded and be creative with their approachーif they can find an opening and take advantage of it, they can be rewarded greatly!

1. -2 = Disadvantage. -1 = Slight Disadvantage or Even. 0 = Even. +1 = Slight Advantage or Even. +2 = Advantage.
2. The matchup chart was based around both the opinions of professional players of each character, as well as our own experience through playing Ken.
3. Characters within each tier are unordered
4. Pokemon Trainer's individual Pokemon (Squirtle, Ivysaur, and Charizard) as well as Echo fighters with no significant difference than their regular counterpart are not shown.
5. For other characters who are not shown here, we are still investigating the matchup.

These commands can be used to execute these moves without relying on the regular input that was listed on the command list.

Ken has quick startup on his aerials, as well as a very fast up special and decently quick grab. Up special (Shoryuken) is the go-to out of shield option, since it comes out so quickly, and can KO opponents reliably. Any of his aerials, such as neutral air, can be used as well, and are less committal. His shield grab has decent startup, but short range and limited follow-ups, so it is usually not the best option.

Ken's jab can be linked to his Shoryuken or his Inazuma Kick if you do it twice. It's a good move to throw out as a quick get-off-me tool.

Ken's neutral held attack is a two-hit axe kick called Inazuma Kick. Using it also depends on the distance between Ken and the opponent, so it may be hard to pull off.

Ken's Dash Attack has a quick startup and long-lasting hitbox. It can be used to whiff punish, and to catch an opponent in landing lag.

Ken's Forward Tilt can be a light elbow uppercut by pressing the attack button briefly at a short distance from your opponent. This elbow strike is very strong as it can be connected to Shoryuken or Drop Kick.

Ken's Forward Tilt releases a quick elbow attack by pressing the Attack button briefly. This can be used as a starting point for a combo that links into a Shoryuken, so use it to KO opponents with high percents. It's very potent when used to punish an opponent's ledge jump.

Ken's Down Tilt can activate a short kick by pressing attack briefly. This move can also start a combo that leads into Shoryuken. This move is quick, and is generally used as a poking tool.

If you hold attack for a long time, you can perform a long-reaching sweep. SInce your opponent gets launched lightly, you can combo this into Hadouken.

Ken's forward smash is a roundhouse kick. It is a great KO move, thanks to the sweetspot at the end of his foot whch causes additional damage and knockback. Throw this out on an opponent getting up from the ledge.

Ken's Up Smash comes out quickly and can be used out of shield, so use it to counter your opponent's big moves with long end lag, as well as for snuffing out an aerial approach.

Ken's Down Smash comes out quickly and has good range. You can hit opponents on the ledge, so use this move out of a dash for a quick punish.

Ken's Neutral Air hits approaching opponents easily thanks to its long lasting hitbox. It is extremely safe on shield (-2/-2), so it's always a good move to throw out in the air. While slightly slower than Ryu's neutral air, it has a bigger hitbox, making it a more useful tool.

Ken's Forward Air has a long lasting hitbox and deals excellent damage. Additionally, you can connect it to Shoryuken depending on how you hit it.

Ken's Back Air is a technique that comes out quickly and has high damage. However, it is difficult to pull off because Ken automatically faces his opponent in 1v1 battles. In order to be able to pull this off, you'll need to become very good at using a RAR back air (reverse aerial rush).

Ken's Up Air kicks upward, and can be comboed into a Shoryuken once it connects with an opponent.

Ken's Down Air can meteor smash diagonally. Do this by the ledge to try and land an edgeguard, but beware that Ken has a poor recovery.

The Hadouken is a ranged special that can be used to control the opponent's movements and limit their options, making it a useful poking tool and way of racking up damage on a ranged opponent. It has noticeable lag, so don't use it when already close to an opponent.

Ken's Side Special is the Tatsumaki, which can travel farther the longer you press the button. Use this for horizontal recovery, or for reading an opponent's roll. Be careful as you can only use this once in the air.

Thanks to the move's intangibility, it is a great approach tool, especially for closing the gap on zoners, and at high percents, it can KO.

Ken's Up Special is the Shoryuken, which can be used as a recovery move or a combo finisher. Additionally, holding the special button will release a flame effect and deal more damage and knockback. To use it effectively as a KO move, make sure to use its command input.

Ken's Down Special is Focus Attack, which grants a super armor effect that can take one attack and follow up with a counter. If charged fully, the opponent will get stunned on hit, opening them up for further attacks.

How to Cancel a Special Attack

You can cancel special attack by flicking the stick twice either left and right either during Ken's charge up pose or immediately after the attack hits.

Forward Throw has a strong knockback angle so try to use it to put opponents over the ledge then prevent them from recovering.

Back Throw has a strong knockback angle so try to use it to put opponents off the stage, and prevent them from recovering.

The opponent is launched slightly upwards. This will connect with up air at low percentages.

The opponent is pummeled downwards then launched slightly upwards. This will connect with up air at low percentages, and is Ken's go to throw at early percents.

How to Unlock Ken

There are three ways to unlock Ken. Completing any of these, then defeating Ken when they appear in the “a New Challenger Appears” screen will allow you to use them afterward. 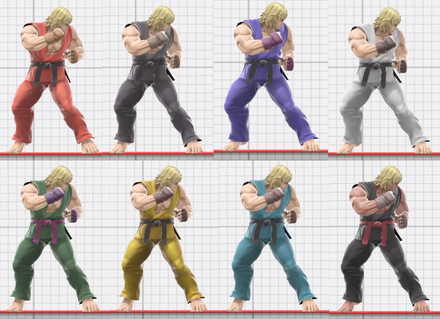 In order for us to make the best articles possible, share your corrections, opinions, and thoughts about 「Ken Guide: Matchup Chart and Combos | List of Ken Command Inputs | Super Smash Bros Ultimate」 with us!