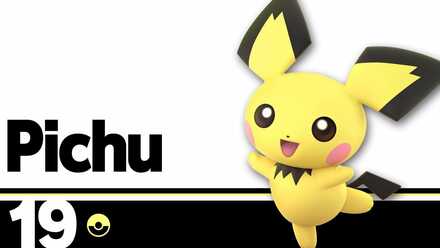 This is a guide to using Pichu in Super Smash Bros. Ultimate. Pichu's bread and butter combos, how to unlock, frame data, alt costumes and skins, as well as Pichu's matchups, counters, and tier list placement can all be found here.

Smash Ultimate Pichu has high damage output on its moves, but damages itself each time it uses electricity in its moves. Whiffing these moves several times for no reason will lead to Pichu quickly taking a lot of damage, so you must be careful with which options you choose. Pichu's recovery (Up B) is also extremely fast, allowing you to bait your opponents into making an option, and then follow it up by dealing damage.

1. -2 = Disadvantage. -1 = Slight Disadvantage or Even. 0 = Even. +1 = Slight Advantage or Even. +2 = Advantage.
2. The matchup chart was based around both the opinions of professional players of each character, as well as our own experience through playing Pichu.
3. Characters within each tier are unordered
4. Pokemon Trainer's individual Pokemon (Squirtle, Ivysaur, and Charizard) as well as Echo fighters with no significant difference than their regular counterpart are not shown.
5. For other characters who are not shown here, we are still investigating the matchup.

At only 6 frames of startup, neutral air is a great out of shield option for Pichu, allowing it to punish unsafe close attacks on shield. Most of its aerials are quick enough to work out of shield, and up smash can also be used for a harder punish on opponents attacking from above. Shield grabbing is 10 frames, but is a bit more risky than neutral air, due to its slower startup and short range.

Pichu's jab comes out extremely quick, but it doesn't have a jab combo, and it doesn't make the opponent flinch long, so it is not the best get-off-me tool. Instead, it is mainly used for jab locks and ledgetrapping.

Pichu's dash attack comes out quick and has decent range, so it is mainly used as a quick whiff punish, or to catch landings.

Pichu's forward tilt is quick, and gains great knockback as the opponent takes more damage. Beware that this move will deal self damage to Pichu, so while it is a good close range move, you shouldn't use it too recklessly.

Pichu's up tilt has quick startup and very little endlag. The hitbox covers Pichu's backside and top to send opponents upward, making it great as a combo starter and get-off-me tool.

Like up tilt, down tilt is a quick move with little endlag. It also functions as a combo starter and poking tool, and is -4 on shield, making it very safe.

Pichu's forward smash has heavy knockback, and a long lasting hitbox, which can be used to beat out an opponent's approach if you have a read on their movement.

Pichu's up smash is very fast, and covers the area from Pichu's back side to front side, so it is useful as an anti-air.

Pichu's down smash is its fastest smash attack, and its long lasting hitbox covers both sides of Pichu, making it great for covering a roll.

Pichu's neutral air is extremely quick, with only 3 frames of startup, making it a great out of shield punish, as well as shield presuring move. Its quick startup makes it great for breaking out of combos and edgeguarding.

Pichu's forward air has quick startup, good range, and a lingering hitbox. Pichu's entire body will have a hitbox, so its long lasting hitbox can be used to punish opponents who jump out of shield.

Pichu's back air also has quick startup and a long lasting hitbox. It can be used as an out of shield option, and as an edgeguarding tool.

Pichu's up air has very quick startup, and is mainly used as a combo extender for sending opponents upward.

Pichu's down air has a meteor hitbox on it, making it great for edgeguarding. It can be comboed into from a down tilt, which when used near the ledge, sets up an early KO.

Pichu's neutral special sends a jolt of electricity along the ground, which will travel forward along the surface. If used from the air, it falls down diagonally, eventually changing into the grounded version after touching down. It is used as a ranged poking tool, as well as an approach option for Pichu, and can even be used to edgeguard an opponent attempting to recover.

Each time Pichu uses this move, it will inflict damage to itself, which can add up quickly, so don't be too careless with it.

Pichu charges up and fires straight forward at an enemy. The longer it is held for, the further it will go, and more damage it will deal, doing about 40% at full charge. It has rather slow startup and endlag, but it can be useful as a recovery option.

Pichu's up special allows it to travel extremely fast in the direction held on the stick (it can go in two different directions by changing the direction inputted). It has no hitbox attached to it, so it is used only for recovering.

Pichu's down special brings a bolt of lightning down from the clouds and hits Pichu, dealing heavy knockback to any opponents caught in the blast. It will only damage Pichu if the lightning reaches its body, so it is possible to use without Pichu taking damage. At high percents, it can be comboed into from up throw for a kill confirm.

Forward throw is used to gain stage control, or to put an opponent offstage. It does not combo, but can KO at high percents if used from the ledge.

Throws an opponent behind Pichu. Doesn't KO until very high percents or combo, so it is only used to put opponents offstage or gain stage control.

Up throw sends an opponent high into the air, and at higher percents, can combo into down special for a kill confirm.

Down throw lightly knocks opponents into the air, allowing for combos into aerials at lower percents.

How to Unlock Pichu

There are 3 ways to unlock Pichu. Completing any of these, then defeating Pichu when they appear in the “a New Challenger Appears” screen will allow you to use them afterward. 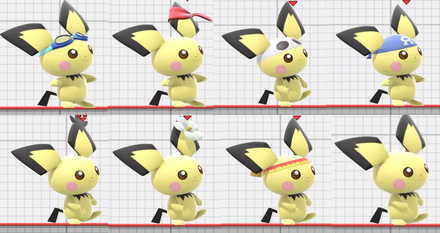 In order for us to make the best articles possible, share your corrections, opinions, and thoughts about 「Pichu Guide: Matchup Chart and Combos | Super Smash Bros Ultimate」 with us!