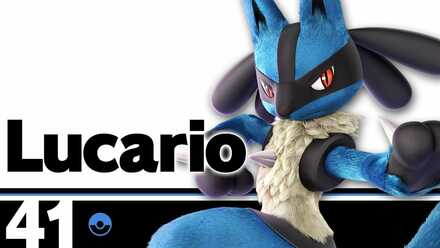 This is a guide to using Lucario in Super Smash Bros. Ultimate. Lucario's bread and butter combos, how to unlock, frame data, alt costumes and skins, as well as Lucario's matchups, counters, and tier list placement can all be found here.

A fighter who gets stronger the more damage he takes

In SSBU, Lucario gains a buff that gets gradually bigger the more damage that he takes. This buff will increase the power of all of his moves, and continue to stack up to 190%. If you can master the skill of fighting with a high percent while avoiding your opponent's KO moves, Lucario can be a very powerful character.

1. -2 = Disadvantage. -1 = Slight Disadvantage or Even. 0 = Even. +1 = Slight Advantage or Even. +2 = Advantage.
2. The matchup chart was based around both the opinions of professional players of each character, as well as our own experience through playing Lucario.
3. Characters within each tier are unordered
4. Pokemon Trainer's individual Pokemon (Squirtle, Ivysaur, and Charizard) as well as Echo fighters with no significant difference than their regular counterpart are not shown.
5. For other characters who are not shown here, we are still investigating the matchup.

Lucario becomes more powerful the more damage he takes, so taking damage is an integral part of his game. However, characters who deal lots of damage but struggle to kill may have a hard time with Lucario, since he might reach very high percents and in turn become capable of taking them out extremely early, giving him good matchups on characters like Bayonetta and Sheik. His Double Team (Down Special) also shuts down Mega Man's pellets and leaf shield, giving the character very few options.

Despite needing to take lots of damage before gaining high kill power, Lucario is somewhat light. Therefore, characters who can deplete his stock at relatively early percents, such as Bowser or Wario can shut his passive effect down. A large part of his gameplan also revolves around aura spehere, so characters with reflectors (Wolf, Fox, etc) or energy absorbers (Ness) can turn it against him. Lastly, his range is nothing special, so characters like Roy, Lucina, or Chrom are able to outrange him with their superior moves.

How to Beat Lucario

The most polarizing part of this matchup is Lucario's aura, where he gains additional damage and knockback on his moves when he has higher percentages (and when he has less stocks than an opponent). As mentioned in the counters section, you need to KO Lucario before he is able to take too much damage. A good Lucario player will be expecting this, so try and find reliable kill setups on him at as low of a percent as possible.

Lucario doesn't have very good out of shield options, other than down aerial, which won't hit opponents above him. In general, most of his moves (except Nair) are also unsafe on shield and have noticeable lag, so you need to apply lots of pressure to his shield, and watch how he reacts, then come up with a plan to counter that.

Lucario has a relatively fast counter in double team, which when activated, can attack an opponent from anywhere, and deals more damage depending on how much aura he has. Since Lucario doesn't have great options for combo breaking, it is highly likely that they will try to use this move to interrupt your combos. If you notice this happening, try to bait it out, then hit him with a big punish (like a smash attack) as he lands.

Always be on the lookout for this move, and when the opponent likes to use it. If your character has a reflector or some way of dealing with projectiles, this is relatively easy to do. If not, you need to be cautious and play around it. Shielding, jumping, parrying, and spot dodging are all effective ways of maneuvering around it, and if done effectively, you can punish him for spamming it.

Just be careful not to get too comfortable shielding, as the Lucario player may become aware of this, and run in to use his Side Special on you, which is a command grab (meaning it will hit you even if you were shielding). It he has a significant amount of aura, this move can deal a ton of damage, or even KO.

These combos assume Lucario's % is at 0.

Lucario's Best Out of Shield Options

Lucario's Down Air is only 7 frames out of shield, making it his fastest OOS option. In general, this will be your best OOS move, unless your opponents throws out a very unsafe move on your shield with a lot of lag, in which case, you may opt for a grab or even Up Smash.

Lucario's jab has pretty quick startup. It is mainly used in combos or to break an opponent's combo, or as a quick punish when you don't have anything better.

Lucario's Dash Attack has quick startup. It is good for a quick punish during an opponent's endlag, or catching their landings. It becomes very powerful and can KO once Lucario's Aura has become powerful enough.

Lucario's FTilt has great range. This can be used to catch an opponent chasing you by turning around mid-dash and throwing it out.

This move comes out very fast, and covers the entire area around Lucario. If it does hit, it can be strung into itself an additional two or three times. Beware that it is unsafe on shield though.

This smash attack has great launch power and range. If Lucario has racked up at least 100% damage on himself, this move can kill an opponent pretty early.

This smash attack deals a lot of damage and has great launch power. If Lucario has racked up at least 100% damage on himself, this move can kill an opponent pretty early.

Another strong move with high launch power. This move will put out hitboxes on the left and right of Lucario, helping him protect his sides.

Lucario's Nair has a strong and a weak hit, so you can throw it out in the air to catch your opponent's jump. This move is also great for comboing into other moves when landed, and it is very safe on an opponent's shield.

Lucario's Fair has a very quick startup. This move can combo into itself as well as other aerials.

This move is very powerful and great for taking stocks. Smash attacks have a lot more lag on them, so try and close the stocks with this move and you may have an easier time.

This move is mostly used as a combo extender to follow up his other aerials, like Fair.

This move comes out in just 4 frames (7 OOS), making it his fastest aerial. However, the range on it is not all that great, and it will usually only hit if you are very close to the enemy.

This move allows Lucario to charge an Aura Sphere and throw it at the opponent. Depending on how long you charge it, and how much damage Lucario has taken, it can rack up a ton of damage and launch your opponent pretty far. While charging this move, inputting a roll, a spotdodge, a jump, or shield will allow you to cancel it and hold the charge. You can also press B mid-charge or after fully charging it to fire.

The move has a hitbox when charging as well, and if done properly, you can catch your opponents landing or movement to deal damage while you charge the sphere up.

Sends a beam out in front of Lucario. The more damage Lucario has taken, the stronger this move is, and the more range it will have. If you are very close to the opponent when using this mmove, it actually works as a command grab, allowing you to hit an opponent that is shielding. When Lucario has some Aura built up, this move will kill extremely early, so you can threaten your opponent with Aura Sphere to make them shield, then run up and use Force Palm to send them flying. Just note that Lucario cannot grab opponents with this move while he is in the air.

This move allows Lucario to move in the direction he inputs extremely fast. When Lucario has taken more damage, he can go even further with this move, and there is an active hitbox at the tip of this move.

When travelling upwards with this move, Lucario can turn horizontally as well (vertically if inputting a horizontal movement). This move actually rotates Lucario, so holding the stick too long will actually send Lucario in the opposite direction, so watch out for this. It is very easy to SD this way if you aren't careful!

Lucario has a counter for his down special, and it comes out extremely quick. It can actually save you from an opponent's non-true combos, but don;t get greedy with it or you will be punished. The strength of the opponent's move has no effect on Lucario, and all that matters is the amount of Aura Lucario has. When the counter is successful, Lucario will strike from the opposite side of where he was attacked, and by holding left or right, he can alter the direction of this attack's movement.

Used for throwing the oppoent forward and gaining stage control. It doesn't combo, so you will mostly only use it for chucking the opponent off stage.

Throws the opponent straight upward. This move can be followed up with a Fair or Uair.

This move will send your opponent up at an angle. At very low percents only, this can be strung together with several Fairs.

How to Unlock Lucario

There are three ways to unlock Lucario. Completing any of these, then defeating Lucario when they appear in the “a New Challenger Appears” screen will allow you to use them afterward. 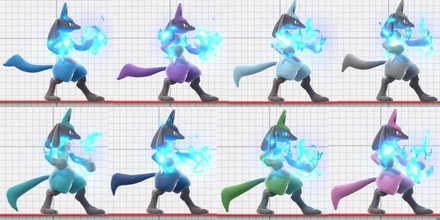 Register as a member and get all the information you want. (It's free!)
Login
Opinions about an article or post go here.
Opinions about an article or post
We at Game8 thank you for your support.
In order for us to make the best articles possible, share your corrections, opinions, and thoughts about "Lucario Guide: Matchup Chart and Combos" with us!
When reporting a problem, please be as specific as possible in providing details such as what conditions the problem occurred under and what kind of effects it had.