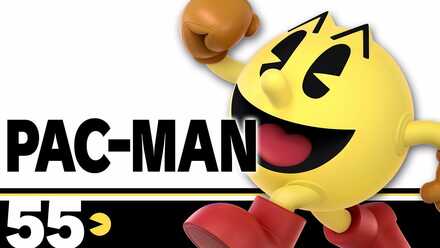 This is a guide to using Pac-Man in Super Smash Bros. Ultimate. Pac-Man's bread and butter combos, how to unlock, frame data, alt costumes and skins, as well as Pac-Man's matchups, counters, and tier list placement can all be found here.

Smash Ultimate Pac-Man has the unique characteristic of being able to choose from a variety of projectiles in his neutral B. Each of these has its own effects and uses, but the 7th item that appears, the Bell, will stun the opponent, making it very good for a heavy follow-up attack. His fire hydrant is also used as a way of putting a layer of separation between Pac-Man and the opponent, and can be launched forward after it takes enough damage. Pac-Man's main gameplan relies on using these tricky projectiles to create mind games with the opponent, limiting their movement and punishing a bad option.

Pac-Man's grab is very slow and punishable, meaning that it is mainly only good for a hard read. His range is rather below average, and combined with the fact that very few of his moves have good knockback, it means that Pac-Man can sometimes struggle to kill until getting an opponent to a pretty high percent. Pac-Man is a tricky character, and players will need to learn the ins and outs of his unique special attacks to get the most out of him.

1. -2 = Disadvantage. -1 = Slight Disadvantage or Even. 0 = Even. +1 = Slight Advantage or Even. +2 = Advantage.
2. The matchup chart was based around both the opinions of professional players of each character, as well as our own experience through playing Pac-Man.
3. Characters within each tier are unordered
4. Pokemon Trainer's individual Pokemon (Squirtle, Ivysaur, and Charizard) as well as Echo fighters with no significant difference than their regular counterpart are not shown.
5. For other characters who are not shown here, we are still investigating the matchup.

Pac-Man has access to some very good out of shield options. His fastest out of shield option is his up special, which is decent, but has a small hitbox, so it is mostly only used for a quick escape option. However, his neutral air is typically a much better option, since it can be used from frame 6, and will allow him to combo the opponent. With an item in hand, chucking it at the opponent is also a fast and low commitment option that can lead into follow-ups, and can punish opponents from a distance. While his grab has good range, it is very slow out of shield (16 frames), and will usually not be fast enough to punish an opponent.

After throwing out all of Pac-Man's jabs, there is little end lag, making it a good get-off-me tool.

Pac-Man's dash attack lasts a long time and has almost no end lag. It is used as an approach tool, and for catching opponents' landings. It can also cross-up shields, making it very hard for an opponent to punish.

Pac-Man's forward tilt will slighlty lift your opponent up. When your opponent is pressuring you at close range, use this attack to create some space. Forward tilt has decent range, but it is not a safe option on shield.

Pac-Man's up tilt gives his fist intangibility, but has a small hitbox which makes it hard to use. This attack is best used only for opponents that are directly above you, and can be also used as a combo starter.

Pac-Man's down tilt comes out fast and has great range, and since Pac-Man returns to his original position after using it, it is a good move for poking your opponent.

Pac-Man's forward smash has very strong knockback. Its startup is slow and can be hard to land, so pair it with the hydrant's water blast to increase your range while sliding in.

Pac-Man's up smash has a large hitbox. Before up smash begins, a hitbox comes out on the side of Pac-Man, making it easy to land this attack while sliding across the stage from the hydrant's water.

Pac-Man's Down smash has strong horizontal knockback. It hits on both sides, so use this attack to call out an opponent's roll.

Pac-Man's neutral air comes out fast and has a lingering hitbox. Pac-Man's entire body becomes a hitbox, making it great as a get-off-me attack. It's also super safe on shield (-3/-4), and is one of Pac-Man's main combo tools.

Pac-Man's forward air comes out fast and has little end lag. The move can be used twice on an opponent in one jump, so it is great for carrying an opponent off stage. It is also safe on shield (-6), and is another combo tool.

Pac-Man's back air is a powerful move with fast startup, high damage, and high knockback. It can be used to edgeguard opponents offstage, or used on the fire hydrant to send it flying at an opponent.

Pac-Man's up air has quick startup and a lingering hitbox. Use it when your oppoenent is directly above you to rack up damage.

Pac-Man's down has sends opponents at an angle that is great for KOing offstage, as well as comboing on stage at lower percents. Great for edgeguarding, and Pac-Man's strongest aerial move when all 4 hits land.

Pac-Man's neutral special summons various items that can be thrown. Memorizing how each item moves and its special perks is key to playing Pac-Man. Only one item can be used at a time, but if you recatch a thrown item, pressing B will allow you to continue cycling through. Items can be re-caught once, and doing so willl allow you to use it out of shield, or as a combo tool.

Pac-Man's side special lets you control his direction with the control stick, making it fantastic for recovery. This attack will be canceled if he does not eat the power pellet at the end, so be careful that your opponent does not attack it when you are using the move. When offstage, it's a good idea to mix this move in with your double jump before usng up special to make it back to the ledge.

Pac-Man's up special will place a trampoline below him, allowing him to land on it jump high for three times in a row. Each time the jump gets higher. However, on the 4th hit, the trampoline will disappear and you will fall below, so make sure to recover before then. It is quick and can be used out of shield since it has a hurtbox, though it is primarily used for recovering.

Pac-Man's down special lays down a fire hydrant.The water dispersed from the hydrant will push enemies and items away. The hydrant can be knocked away if it takes around 13% damage. The speed and tragectory of the hydrant will depend on the attack it receives, but the damage will remain constant. It works well as a ranged attack and can KO at the ledge at later percents. Hiding behind the hydrant is also useful for playing defensively, but be careful that the opponent doesn't hit it toward you, as Pac-Man can also be damaged by it.

Pac-Man's forward through cannot be used to connect combos. Use it to throw your opponent off stage and then work to prevent their recovery with tools like the fire hydrant.

Pac-Man's most powerful throw is his back throw. Back throw can kill at the ledge at high percents (~140%).

Up throw can combo into up airs due to low knockback power. At lower percents, this is Pac-Man's go-to throw.

Down throw will lightly bounce your opponent upward, but unfortunately does not combo due to its long end lag.

How to Unlock Pac-Man

There are three ways to unlock Pac-Man. Completing any of these, then defeating Pac-Man when they appear in the “a New Challenger Appears” screen will allow you to use them afterward. 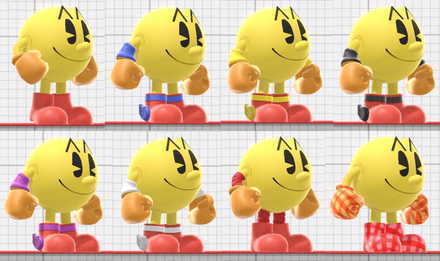 Register as a member and get all the information you want. (It's free!)
Login
Opinions about an article or post go here.
Opinions about an article or post
We at Game8 thank you for your support.
In order for us to make the best articles possible, share your corrections, opinions, and thoughts about "Pac-Man Guide: Matchup Chart and Combos" with us!
When reporting a problem, please be as specific as possible in providing details such as what conditions the problem occurred under and what kind of effects it had.