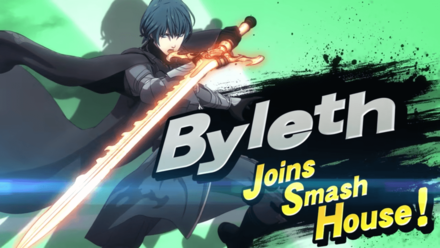 This is a guide to using Byleth in Super Smash Bros. Ultimate. Byleth's bread and butter combos, how to unlock, frame data, alt costumes and skins, as well as Byleth's matchups, counters, and tier list placement can all be found here.

A hard hitter with good reach, but slow with punishable moves

Byleth has good reach and strong singular attacks, but is a character with slow movement speed who can be easily punished after a missed attack. They can be a strong character if you manage their spacing, but fighting up close becomes difficult. However, if they are able to get some close range combos, they have potential to be a very strong character.

1. -2 = Disadvantage. -1 = Slight Disadvantage or Even. 0 = Even. +1 = Slight Advantage or Even. +2 = Advantage.
2. The matchup chart was based around both the opinions of professional players of each character, as well as our own experience through playing Byleth.
3. Characters within each tier are unordered
4. Pokemon Trainer's individual Pokemon (Squirtle, Ivysaur, and Charizard) as well as Echo fighters with no significant difference than their regular counterpart are not shown.
5. For other characters who are not shown here, we are still investigating the matchup.

Down tilt combos are something Byleth will be using a lot. When down tilt hits, it brings oppoents in closer to Byleth, allowing attacks to connect at low percents.

Down throw combos can easily rack up damage on low percent opponents. Becuase Byleth has few moves to deal with close range, the opponent will try to proactively close in. When they close in, grab them and throw them into a combo.

Forward air combos are only used when the opponent is at a low percent. When there is an opening after the attack, add on a dash attack to rack up some extra damage.

The up tilt combo only works when it connects with the behind hit. When an opponent comes in with a dash attack, use this combo after landing with a reversed neutral air.

How to Counter Byleth

Go in close and avoid fighting at a distance

Byleth has a parcticular range his long reaching attacks do well in. In order to counter this, jump or shield until you are close to put him at a disadvantage. Due to Byleth having no strong attacks at close range, attack once you close in.

Dodge the arrow by jumping

Jump over Byleth's arrow attack. If blocked with shield, unless fired from a short distance, there will not be enough time to counterattack. As long as Byleth does not cancel it, there are only two options when firing the arrow. If you can get the timing down, dodging will be easy. 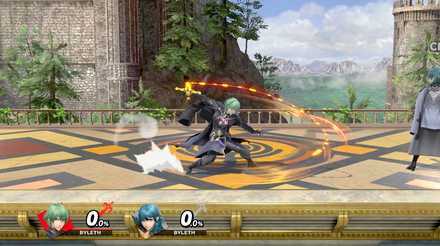 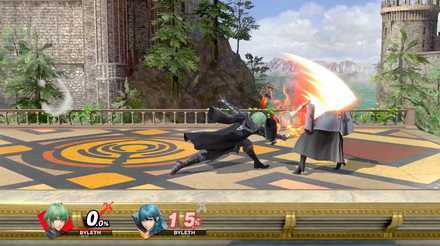 Dash attack's sweetspot hit near the end of the blade has great horizontal knockback. It is good for punishing landings, but has significant end lag. 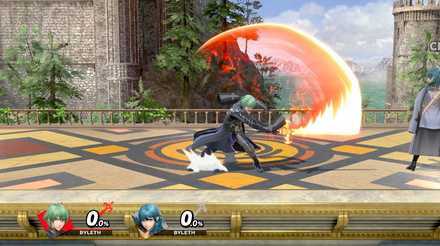 Byleth has wide range with his forward tilt. It can sufficiently cover above as well, so it is a good attack to use against landing aerial opponents. 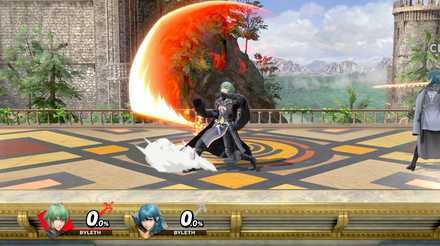 Byleth's up tilt attack also has good range. Covering the space directly above Byleth is hard with forward tilt, so use this attack to deal with attacks coming from directly above. 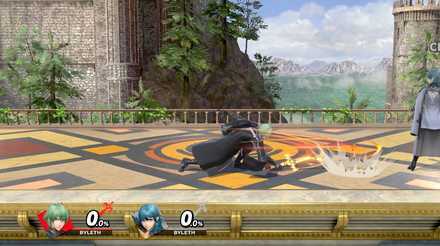 After landing down tilt, the opponent is lightly sent into thte air towards Byleth. After landing the hit, you can connect with side tile or up special, so use this move as a combo starter. 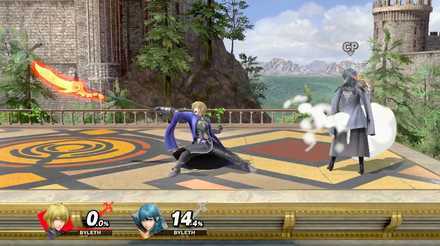 Byleth's forward smash has great range and an extremely strong tipper. The lance shaft has a weak spot. This move can be shifted up or down to catch oppponents on the ledge. It can also 2 frame opponents attempting to grab the ledge. This move has quite a bit of end lag and can be punished if missed. 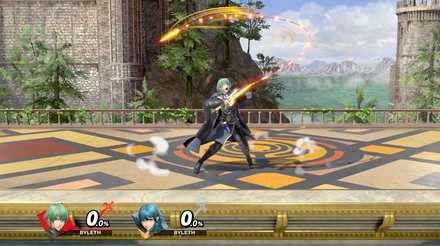 Byleth's up smash throws his whip into the air and spins hit, hitting mulitple times. It has a wide upwards hitbox and is great for juggling opponents trying to land. 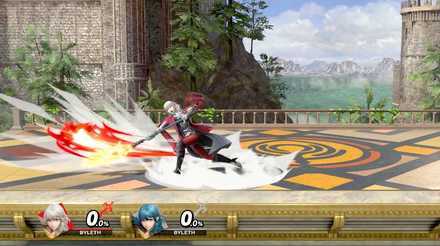 The strongest down smash in the game. A fully charged smash attack can nearly break a shield. However, this attack is incredibly slow. 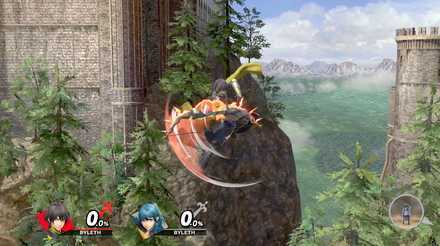 Neutral air spins Byleth's bow around him. Byleth's fastest aerial attack and best tool for approaching, nair will be Byleth's answer to faster characters such as Captain Falcon or Sonic. 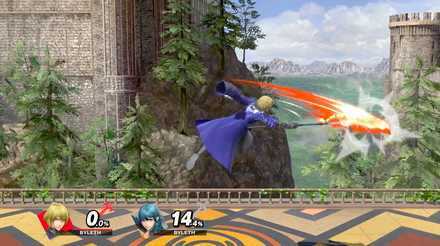 Fair throws out Byleth's lance Areadbhar in a horizontal motion. This move has good reach and can be a fairly safe option if properly spaced. The tip of Areadbhar deals more damage and knockback than the shaft. This move has the lowest end lag of all of Byleth's aerials. 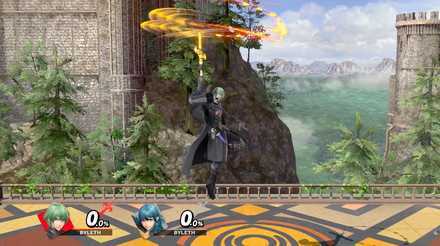 Byleth spins his whip upward into the air, hitting multiple times. This attack is great for juggling airbone opponents and can even KO at higher percents. 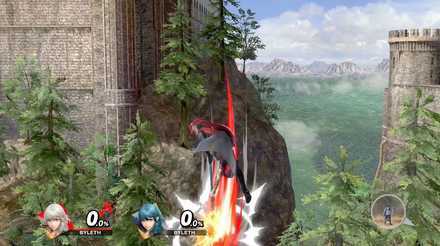 Byleth's down air swings Aymr downward for a very powerful attack. Not only does this move deal heavy shield damage and have a meteor effect, it is the strongest dair in the game. However, such a powerful attack comes with a very slow start up and even longer ending lag. 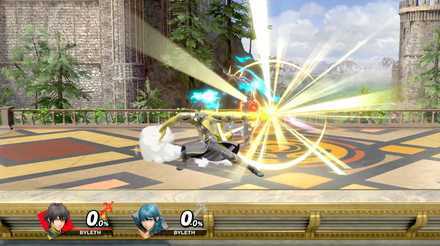 Byleth fires a powerful arrow from Failnaught. When fully charged, Failnaught can almost break a full shield. This attack's direction can also be changed when charging, and it can be canceled up until a certain part of the charge. It is a great long distance option for Byleth and canceling the attack can be used to mix up your opponent when they are off stage. 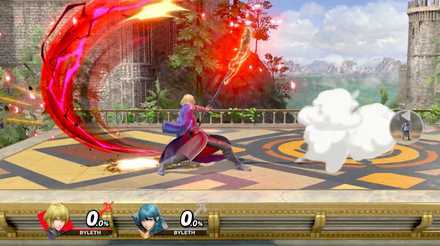 A powerful move that has great range for covering many options. It can also be used in the air for even more range, but it will have more ending lag. There is a sweetspot at the end of Areadbhar.

Up Special (Sword of the Creator) 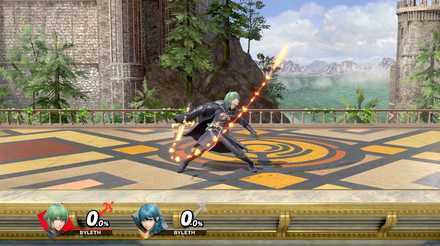 If used near your opponent, Byleth will throw them into the air and then pull himself up to them before kicking them down. This move will also cause an untechable spike from 50%. It can also be used as a tether to recovery to the stage, although Byleth is vulnerable while the blade is extended. 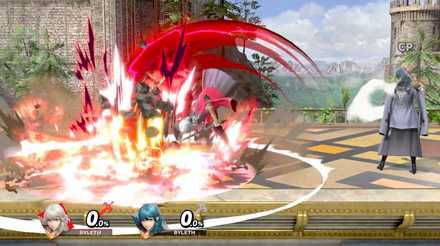 An extremely powerful downward slash using Aymr. This attack is incredibly slow to ready, but it does give Byleth super armor and its direction can be change to mix up your opponent. This move can break shields upon successfully landing a blow. Using down special when recovering on stage is also a decent option to counter a waiting opponent. 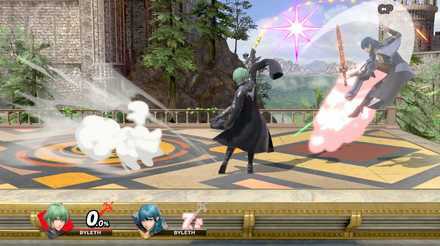 Forward throw tosses your opponent forward with a slash from Byleth's sword. 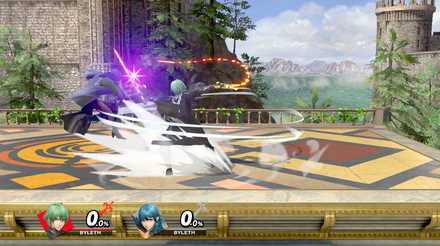 Byleth spins the opponent around several times, similar to Mario's back throw, before throwing them behind him. It is Byleth's most damaging throw. 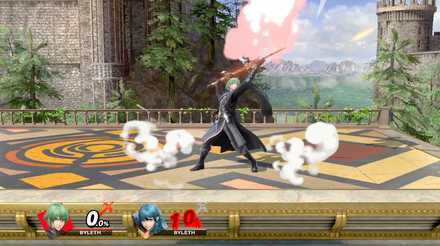 Slashes the opponent into the air with his sword. Up throw can combo into up special at low %, but your opponent can also DI away. 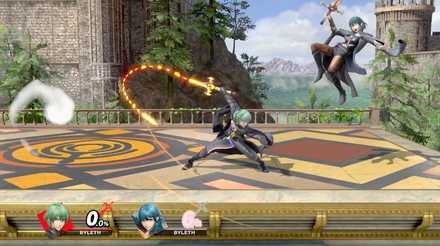 Down throw is a great combo starter that can combo into forward tilt or fair starting from 0%. Use this throw to rack up damage in the early percents.

How to Get Byleth 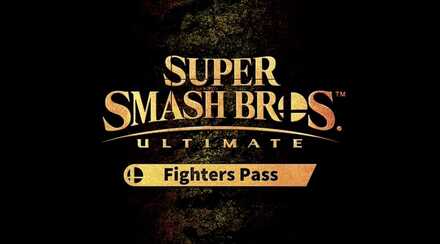 Byleth is included with the Fighter's Pass, which can be purchased from the Nintendo eShop for $24.99 USD ($31.49 CD). The Fighter's Pass includes a total of five additional DLC characters (including Byleth), so be sure and purchase it if you want to have all characters.

If you just want Byleth, you can purchase them individually by getting the Challenger Pack 5. It will cost $5.99 USD ($7.55 CA). 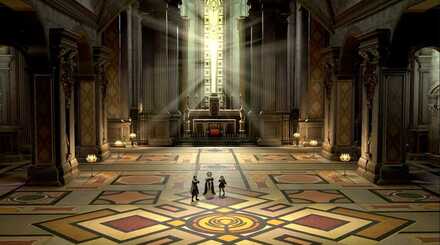 If you purchase Byleth via the Fighter's Pass or Challenger Pack, you will also gain access to a new stage: Garegg Mach Monastery.

Play As Male or Female Byleth

Much like Robin and Corrin, Byleth has both male and female versions that can be played as, and both have their own color varieties. 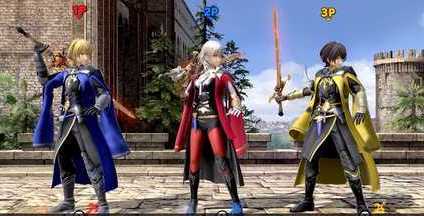 The alts shown above are references to the house leaders of Fire Emblem: THree Houses: Dimitri, Edelgard, and Claude.

Register as a member and get all the information you want. (It's free!)
Login
Opinions about an article or post go here.
Opinions about an article or post
We at Game8 thank you for your support.
In order for us to make the best articles possible, share your corrections, opinions, and thoughts about "Byleth Guide: Matchup Chart and Combos | How to Beat Byleth" with us!
When reporting a problem, please be as specific as possible in providing details such as what conditions the problem occurred under and what kind of effects it had.