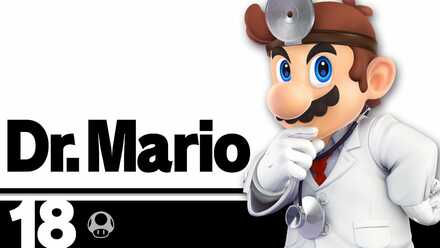 This is a guide to using Dr. Mario in Super Smash Bros. Ultimate. Dr. Mario's bread and butter combos, how to unlock, frame data, alt costumes and skins, as well as Dr. Mario's matchups, counters, and tier list placement can all be found here.

A Brawler with strong moves that have heavy knockback

Dr. Mario in Smash Ultimate is a character who fights up close using his moves with high damage output and knockback. His quick and easy to hit aerial attacks (Nair, Bair, Uair) are good for dealing damage, while he can make use of his Down Special and very fast Smash Attacks / Up Special to take stocks.

While his Up B is very strong as a finisher, the vertical distance on it is significantly worse than that of regular Mario's, so you have to be extra careful not to get edgeguarded, or else he will have a tough time recovering. His poor mobility also makes it somewhat difficult for him to approach characters with superior range.

1. -2 = Disadvantage. -1 = Slight Disadvantage or Even. 0 = Even. +1 = Slight Advantage or Even. +2 = Advantage.
2. The matchup chart was based around both the opinions of professional players of each character, as well as our own experience through playing Dr. Mario.
3. Characters within each tier are unordered
4. Pokemon Trainer's individual Pokemon (Squirtle, Ivysaur, and Charizard) as well as Echo fighters with no significant difference than their regular counterpart are not shown.
5. For other characters who are not shown here, we are still investigating the matchup.

Dr. Mario has access to some great out of shield options, with his up B being one of the quickest out of shield moves in the game. It will be your go to oos punish, as it is quick enough to punish nearly any move that hits your shield without proper spacing. Dr. Mario can also use one of his aerials for a quick punish, depending on where the opponent is, or an up smash to hit opponents above him. His shield grab is 10 frames, which can lead into a combo starting with down throw.

Dr. Mario's jab is extremely fast, making it a great move to use after landing, or as an up close get-off-me tool.

Dr. Mario's dash attack slides forward, and will send an opponent upward so they can be comboed. Its long hitbox makes it good for catching opponents' landings.

Dr. Mario's forward tilt has good range, and very quick startup. It is another good get-off-me tool for opponents that you want to send away.

Dr. Mario's up tilt sends opponents upward, allowing for various combos into itself, up air, or back air. It is one of his main combo starters.

Dr. Mario's down tilt sends opponents upward, and is another quick combo starter. It can combo into down B at higher percents, which is one of Doc's main KO confirms.

Dr. Mario's forward smash has different damage and knockback depending on whether it hits from the base or the tip. When possible, try and hit opponents up close with it, since Dr. Mario's hand will send opponents further.

Dr. Mario's up smash comes out quick, has relatively short endlag, and gives him temporary intangibility on his head. It is great for punishing an opponent attempting to approach from the air.

Dr. Mario's down smash is his fastest smash attack, and kicks on both sides of him. The back hit is stronger than the first one, so if using it to KO, try and hit opponents while turned away from them. It can be used to catch rolls or edgeguard recovering opponents.

Dr. Mario's neutral air comes out extremely quick and has a lingering hitbox. It is great as a combo breaker and get-off-me tool. It is extremely safe on shield too (-4/-3), so it is good for shield pressure as well, and can also be used for ledgetrapping.

Dr. Mario's forward air deals great damage and knockback. It can be comboed into from a pill (neutral B), which is a useful KO confirm. It does not spike opponents.

Dr. Mario's back air has good range and quick startup, and since it is -5/-6 on shield, it is good for pressuring shields. It is a good KO option for Dr. Mario, so aim it at opponents at high percents.

Dr. Mario's up air comes out very quick, and sends an opponent upward, making it useful as a combo extender.

Dr. Mario's down air is a stomp, which can spike opponents, making it useful for edgeguarding or as an on-stage combo starter.

Dr. Mario's neutral special sends a pill out, which bounces forward on the ground. Capsules are one of Dr. Mario's main approach tools, as they allow him to find an opening on his opponents, and can combo into other moves.

Dr. Mario's side special is used to reflect projectiles back at the sender. When used directly on an opponent, it will reverse the direction they face, so it is useful for edgeguarding, since it can send an opponent in the opposite direction.

Dr. Mario's up special is a powerful move that comes out extremely quick, making it a great out of shield option. It can be used to KO opponents, but it is rather lacking as a recovery, since it offers poor vertical movement.

Dr. Mario's down special is a powerful spinning attack with great knockback on the final hit, making it useful as a KO option, particularly when preceded by a down throw. Mashing the special button also allows Doc to travel upward slightly, so it can be used together with hs jump and before up special when offstage to recover.

Dr. Mario's forward throw is mainly used for gaining stage control or putting an opponent offstage. It does not KO until very high percents, so it is usually better to go with another throw.

Dr. Mario's back throw is one of the strongest of its kind on the game. When standing near the ledge, it is great for KOing an opponent at 100%+.

At low percents, Dr. Mario's up throw can combo into his aerials like back air or up air.

Down Throw is Dr. Mario's go-to throw, since it can combo into a variety of his moves. Near the ledge, it can be comboed into down b for one of his most powerful KO confirms.

How to Unlock Dr. Mario

There are 3 ways to unlock Dr. Mario. Completing any of these, then defeating Dr. Mario when they appear in the “a New Challenger Appears” screen will allow you to use them afterward. 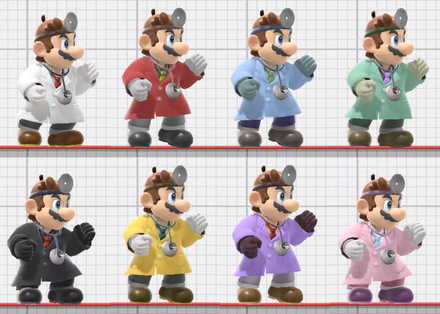 In order for us to make the best articles possible, share your corrections, opinions, and thoughts about 「Dr. Mario Guide: Matchup Chart and Combos | Super Smash Bros Ultimate」 with us!