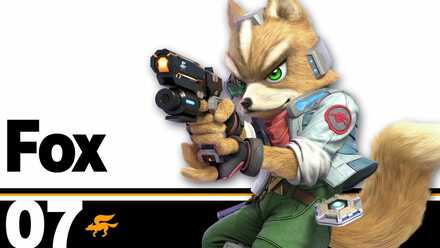 This is a guide to Fox in the game Super Smash Bros. Ultimate. Everything about Fox, including how to unlock them, bread and butter combos, frame data, alt costumes and skins, as well as Fox matchups and counters, can be found here.

In Smash Ultimate, Fox is quick, and has access to a variety of attacks that have excellent frame data, with many of them coming out quickly and being hard to punish. With Fox's low endlag on his attacks, landing most of his attacks will allow you to combo your opponent. Fox also has his smash attacks and up aerial, which are good for KOing opponents. Use Fox's quick movement to bait out an option from your opponent, then move in to punish them!

Fox's primary weaknesses are the fact that he gets KO'ed rather early, being one of the lighter characters in the roster. His recovery is also quite predictable, so he is rather prone to getting edgeguarded. He can also struggle to KO sometimes if he misses a confirm, so Fox players need to put plenty of practice into their combos!

1. -2 = Disadvantage. -1 = Slight Disadvantage or Even. 0 = Even. +1 = Slight Advantage or Even. +2 = Advantage.
2. The matchup chart was based around both the opinions of professional players of each character, as well as our own experience through playing Fox.
3. Characters within each tier are unordered
4. Pokemon Trainer's individual Pokemon (Squirtle, Ivysaur, and Charizard) as well as Echo fighters with no significant difference than their regular counterpart are not shown.
5. For other characters who are not shown here, we are still investigating the matchup.

Fox has a plethora of good out of shield options that allow him to punish most unsafe moves. Technically jump into Down B is his fastest option, although neutral air or up smash is usually the go to for a quick punish. His shield grab is 10 frames, which is pretty quick, but not his fastest option, and grants limited follow-ups.

With its extremely fast startup, this move is good as both a get-off-me tool, and as a combo finisher.

The quick startup on this move makes it good as a quick whiff punish. Depending on the opponent's damage, it will combo into Nair or Fair, making it a very useful part of Fox's kit.

This move can be used to hit an opponent spaced slightly away from Fox. It can be angled up or down, making it easier to hit short characters.

A quick move that launches an opponent upward, and can combo into itself. No matter where it hits an opponent, they will always be sent upward, making it a good tool for racking up damage.

Sends an opponent up and away, allowing for a follow-up into Fair, Up Tilt, etc.

Sends an opponent forward, and will also cause Fox to move forward. This is important to note, because misusing it may make it even easier for an opponent to punish.

A very good and fast move for KOing. Use Fox's fast mobility to move in an an opponent and up smash them at higher percents. Its fast startup means it is good as an out of shield punish. Using Nair can set up a tech chase, which can be followed up with this move for a KO.

Fox's fastest smash attack. Useful for punishing a roll, or as a quick get-off-me tool.

Neutral Air is the most versatile of all Fox's aerials. It comes out quick, and if it hits, it can lead into a free dash attack or up smash. It has low landing lag, and is -3/-4 on shield, meaning that opponents won't be able to punish it with an OOS move in most cases.

Fox's forward air is good for dealing damage. Additionally, if the final hit doesn't connect, it can be comboed into another move. Note that it is unsafe on shield.

A powerful aerial move, Fox's back air is good for KOing an opponent. At -4 on shield, it is also a good move for applying shield pressure.

Fox's up air is another good move for KOing opponents. It can combo into itself, so be sure to use it to juggle opponents in disadvantage.

Fox's down air is a multi hit move, and can be comboed into other moves, including up smash.

Used to rack up damage on opponents from a distance. While it doesn't make the opponent flinch, it is fast enough to use rapidly, so use it when you are far away from an opponent, or at the start of the match for a free 2~3%.

Fox's side special can be used to recover horizontally, or to combo into up air. It cannot cross up shields, so hitting shielded opponents will get you punished, and it should not be overused.

Fox's up B is mainly used for recovery, although it can also KO at high percents (such as in the air). It can be angled during its startup, but it does leave Fox a bit vulnerable when offstage.

Fox's down B is a reflector with fast startup, and the ability to send projectiles back at the user. It will send opponents down and away, so it's also very good to use as an edgeguarding tool.

Fox has a pretty quick grab, meaning that it is good against shielding opponents, but none of his throws have any combos, and they cannot KO, so throws are primarily used to gain stage control.

How to Unlock Fox in World of Light 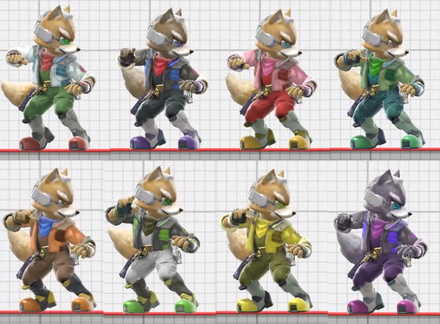 Register as a member and get all the information you want. (It's free!)
Login
Opinions about an article or post go here.
Opinions about an article or post
We at Game8 thank you for your support.
In order for us to make the best articles possible, share your corrections, opinions, and thoughts about "Fox Guide: Matchup Chart and Combos" with us!
When reporting a problem, please be as specific as possible in providing details such as what conditions the problem occurred under and what kind of effects it had.