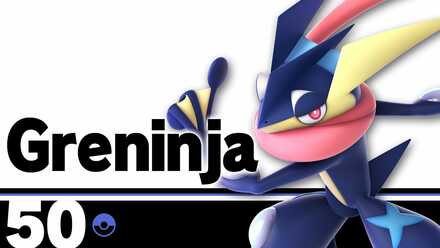 This is a guide to using Greninja in Super Smash Bros. Ultimate. Greninja's bread and butter combos, how to unlock, frame data, alt costumes and skins, as well as Greninja's matchups, counters, and tier list placement can all be found here.

A versatile fighter with great mobility

Smash Ultimate Greninja is a very versatile charcter with excellent speed and mobility, a good projectile, as well as lots of deadly combos. Greninja relies heavily on its powerful combo game, so it is important to learn which moves can be comboed off of to make the most of this character. Greninja has access to combos from its grabs, aerials, and grounded options, including dash attack. Additionally, the character is not short of KO options.

While a very good character overall, Greninja is quite light, and thus can be KO'ed rather early. It also has poor out of shield options, meaning that it will struggle to punish opponents that attack its shield. Lastly, Greninja's disadvantage is somewhat mediocre, so Greninja players will have to be creative in order to land and reset neutral.

1. -2 = Disadvantage. -1 = Slight Disadvantage or Even. 0 = Even. +1 = Slight Advantage or Even. +2 = Advantage.
2. The matchup chart was based around both the opinions of professional players of each character, as well as our own experience through playing Greninja.
3. Characters within each tier are unordered
4. Pokemon Trainer's individual Pokemon (Squirtle, Ivysaur, and Charizard) as well as Echo fighters with no significant difference than their regular counterpart are not shown.
5. For other characters who are not shown here, we are still investigating the matchup.

Greninja has poor out of shield options, meaning that he struggles a bit in terms of defense. The only somewhat quick options he has are back air and up air, but they are situational, as they will ht an opponent behind or above Greninja only, and even then, they don't come out until frames 8 and 10 respectively. Up smash can also be used to try and hit opponents above him, although the hitboxes that hit on both sides of Greninja do not come out until later than frame 12.

He also has a slow grab, which is too slow to be used out of shield for a quick punish. In most cases, Greninja will have no option other than simply dropping shield and trying to hit with a quick move like jab or down tilt, or simply moving away to reset neutral.

Greninja's jab has a quick startup. Greninja lacks many attacks with quick startup, so it's a valuable short-range tool for Greninja.

Greninja's dash attack has a quick startup. It's a great combo starter due to the angle it sends opponents, and can be used as a whiff punish.

Greninja's forward tilt has decent range, and can be angled up or down to hit an opponent in the air or close to the ground. It's mostly used as a poking tool, especially after a back dash.

Greninja's up tilt hits opponents upward into the air with its tongue. It's mainly used as a get-off-me tool against opponents trying to catch your landing, or as a combo starter. It can combo into itself, as well as an aerial.

Greninja swipes his opponent with his tongue. It's mainly used to hit enemies on the ledge, or for a KO confirm into an Up Smash.

Greninja's forward smash is great for range and knockback. Most of the time, Greninja can KO without relying on smash attacks, so forward smash alone is rarely used, other than as a hard punish.

Greninja's up smash is a two-staged hit, beginning upward then proceeding down to Greninja's sides. If the first hit connects, the opponent is knocked strongly upwards. However, if it the first hit doesn't connect, the second hit will only lightly launch the opponent horizontally. Since it's difficult to land the first hit, it's mostly just used as a combo finisher, or to hit opponents on a platform.

Greninja's down smash has the fastest startup of all its smash attacks. It's mainly used as an edgeguarding tool, or a way to counter an opponent that is rolling in, due to the range of the multiple hitboxes.

Greninja's neutral air is mainly used as a combo starter. It can confirm into an up smash or back air. The hitbox covers Greninja's whole body, and it is very safe on shield.

Greninja's forward air is great for range, damage, and knockback. Despite its long startup, its range makes it a very useful poking tool, and it is very safe on shield. It is a very useful tool in Greninja's neutral game, as it can be used to start combos, and can KO at higher percentages. It also works as an edgeguarding tool for offstage opponents.

Greninja's back air is its fastest aerial. Since most of its other aerials suffer from slow startup, back air is the go to for a combo follow-up.

Greninja's up air has quick startup. It's mainly used to juggle, but it can also be used as for drag-down combo due to its multi-hit property.

Greninja kicks down with his feet in his down air. This attack's long landing lag makes it difficult to make use of, although hitting an opponent with it causes Greninja to bounce into the air, and it can lead into some combos.

Greninja's Water Shuriken is a useful projectile. It can be charged by holding the special button longer, which leads to an increase in damage and knockback, at the cost of less speed and range. The charge can't be cancelled and held onto, so only start the move when you want to release it then. When charged to the full extent, the move can KO at high percents, and when uncharged, it is useful as a long ranged poking tool.

Greninja disappears into the shadows for a sneak attack in his side special. Greninja goes into the shadows when you press and hold the special button, then it performs the attack when you release the button. You can control the movement of Greninja even in the shadows. The attack has a slow startup at close range, so it's mainly used as a recovery tool, although landing the attack on the opponent can deal significant knockback.

Greninja launches himself in a given direction using his up special. You choose the direction Greninja is initially launched in, and you're also able to change it once. The travel distance of the jump is quite far, but Greninja will go into helplessness immediately after the second hydro pump is used. While the move doesn't damage opponents, it can be used to prevent the recovery of some characters, similar to Mario's F.L.U.D.D.

Greninja's down special is essentially a counterattack. Greninja will freeze in place until struck. After being struck, Greninja will disappear then jump out to strike the opponent. You can decide the direction it jumps out in. Unlink other counters, the attack portion has rather slow startup, which makes it better to only for edgeguarding.

Greninja shoves his opponent forward. It's not used for combos, because of the distance it creates between Greninja and the opponent even at low percentages.

Greninja smacks his opponent backwards. Like its Forward Throw, it cannot be used for combos, because of the distance it creates between Greninja and the opponent at low percentages, so it's mainly used to put an opponent offstage.

Greninja tosses his opponent upward. It can be followed up with an up air. At very high percents, it can KO.

Greninja throws his opponent downward. It works as a combo starter into back air, so be sure and practice your timing with doing a reverse aerial rush.

How to Unlock Greninja

There are three ways to unlock Greninja. Completing any of these, then defeating Greninja when they appear in the “a New Challenger Appears” screen will allow you to use them afterward.

In order for us to make the best articles possible, share your corrections, opinions, and thoughts about 「Greninja Guide: Matchup Chart and Combos | Super Smash Bros Ultimate」 with us!